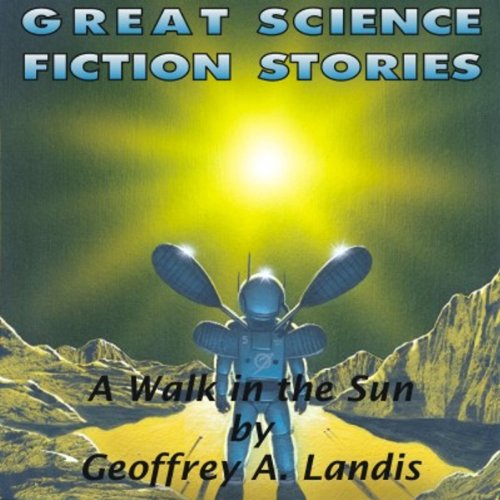 A Walk in the Sun

A haunting piano melody cascades into the shimmering electronic signature music of Infinivox's "Great Science Fiction Stories" series. IT IS EPIC...and deservedly so. This Hugo Award winning short story is a poignant and ingenious tale of a stranded Astronaut on the moon.

Theoretically Trish Mulligan's smashed spaceship's contains everything she needs to survive; maps, food, water and her solar-powered spacesuit. She manages to broadcast a distress signal to Earth, but to survive until they arrive she'll also need to outrun the sunset. If the sun sets, her suit's automated life support system will stop working and she'll die on the moon. So, she'll have to race the sun. On Earth it would be an interminable marathon pace but at least there she wouldn't be alone.

Though author Geoffrey Landis is only a part time science fiction writer, he works for NASA as his day job; you wouldn't know it by this story. A Walk in the Sun reads like it was written by a Grandmaster!

"An AWESOME story, what is not to love?" (SFFaudio.com)

What listeners say about A Walk in the Sun

One of My Most Memorable Sci-Fi Short Stories

It might not be quite the Short Happy Life of Francis Macomber (my favorite short story across all genres), but for me it's the most memorable of all of the short Sci-Fi stories I've read. And I've read many, beginning in the 60's. Highly recommended. Will there be an 11,000 K race on the moon in the future? That'll piss off the people with 26.2, 70.3, and 140.6 bumper stickers:)

I've been a science fiction fan since the 1970s, but at some point in the 1990s I became jaded. Rightly or wrongly I perceived the genre as infected with forced cynicism, with characters motivated solely by their career, and authors carefully avoiding having any sense of wonder - or "sensawunda" as they dismissively termed it - in their stories.
Then recently I happened to come across Geoffrey A. Landis's "A Sultan of the Clouds" in The Year's Top Short SF Novels. Besides being a science fiction writer, Landis happens to work for NASA, and has his finger on the pulse when it comes to the latest knowledge of the solar system. Although "Sultan" is largely restricted to the planet Venus, Landis manages to convey the sheer awe of what it would be like to have cities in the clouds of our nearest planetary neighbour, and his exploration of the possibilities of terraforming proves to be as fascinating as it is credible.
In fact Landis comes across as a modern-day Arthur C. Clarke, even though it's difficult to get hold of his work. His one novel, Mars Crossing, appears to be a forerunner of Andy Weir's The Martian, but isn't available on Kindle, let alone audio.
"A Walk In The Sunshine" certainly feels Clarke-like. The premise is straightforward - a survivor of a lunar crash has to outrace the sunset if she's to survive long enough to be rescued - but it's enough to make for a suspenseful and moving short story. It's a reminder of just how effective shorter works of fiction can be, and how the real physical dangers of outer space can make for good drama in their own right.
In terms of performance, this is a little odd. The original text is effectively delivered, with sound effects to convey radio communication and so on. But there are also musical interludes which raise the question, "Why are you doing this?" Early in the story we get some 70s-style spacey music, which I thought was pleasant enough, but then again I like that sort of thing. As the story progresses, we get bursts of something that sounds like the intro to a Joy Division track, which again is welcome but a bit out of place.
Whatever the wisdom of these particular musical choices, the excellent storytelling skills of Landis come across, and I hope Audible will go some way towards bringing this first class, yet somewhat overlooked, author to a wider audience.

Edge of Your Seat reading. I lived and breathed with the main character.