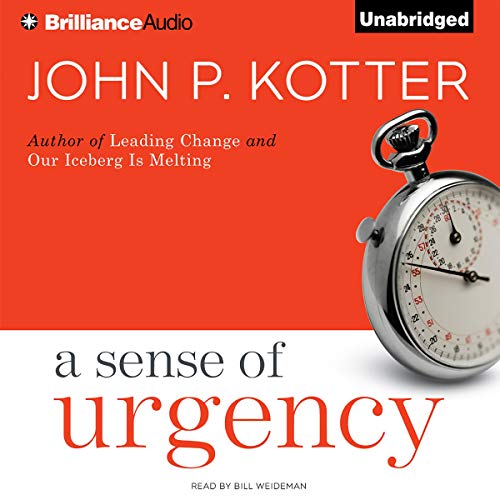 A Sense of Urgency

True urgency is a gut-level determination to move and win, now.

Its practitioners are unusually alert. They come to work each day determined to achieve something important, and they shed irrelevant activities to move faster and smarter.

Those with a sense of urgency are the opposite of complacent - but they are not stressed-out and anxious, generating great activity without much productivity. Instead, they move boldly toward the future - sharply on the lookout for the hazards and the opportunities that change brings.

Best-selling author and business guru John Kotter knows about urgency. "Raising urgency" is the first step in his enormously successful eight-step framework, first articulated in Leading Change. But as Kotter illustrates, increasing urgency is the toughest of the eight steps, and the one without which even the most brilliant, high-powered initiatives will sputter and die.

More importantly, as we transition to a world where change is continuous - not just episodic - he shows how urgency must become a core, sustained capability.

With vivid and powerful stories, Kotter reveals a distinctive view of the kind of urgency needed in every organization. He also highlights the insidious nature of its nemesis, complacency, in all its guises. He explains the crucial difference between constructive true urgency, and the frantic wheel-spinning that is so often mistaken for urgency. He provides key tactics for increasing urgency, as well as exposing and rooting out complacency, with chapters on:

What listeners say about A Sense of Urgency

While some of the ideas presented in this book are helpful it's presentation leaves much to be desired. I had a difficult time staying awake listening to it.

Another great book by the author.
will definitely listen to it all over again and again

found this book rather boring and not very much value adding. Waste of time to be honest. Kotter's written much better books then this one.

not one of his best but still worth a read

not one of his best but still worth a read. I think he could have done a better job in explaining how to apply some of the real world principles that he talked about in the book about urgency.

Good book but can be more concise.

It's a good book w insightful points like
- Complacency down. Urgency up
- Adresse the heart. Not just brain.
- Being cognizant of false urgency. Avoid purposeless urgent task to look busy.
- Make room and prioritize urgency.
- Bring outside in.
- Focus on customer facing employees. Use every interview chance to get competitor info.
- Never waste a good crisis. Find opportunities in crisis.
- Behave with urgency everyday. From high level execs
- Deal w NoNos as they challenge urgency and retains status quo.

The problem with this book is similar to most of the business or leadership books. A 2 pages essay can be expanded into a 200 pages book.

Unless you have to read it for work, move on to something more interesting. It wimt be hard to find.

Would you consider the audio edition of A Sense of Urgency to be better than the print version?

No but it was more impactful for me because I was hearing it when my mind was active. Many times when I read, I am not as engaged as I should be.

Its a little tool long for that but it was an easy listen.

Pretty much common sense stuff here. If I never hear the words "urgency", "complacency" and "NoNo" again it will be too soon...

painful book to try and listen to

Very dry material. Only listened to it because our plant is using the strategy. If you are looking for a book go with the 7 habits of highly effective people. Only read this book if your company has already chosen it as the platform.

Even then the book has very little useful information