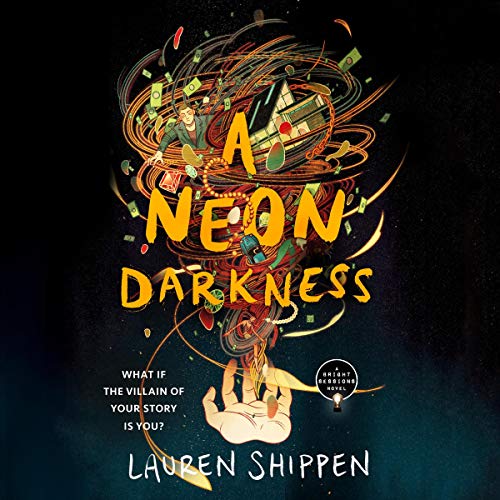 By: Lauren Shippen
Narrated by: Charlie Ian
Try for $0.00

A Neon Darkness, the second Bright Sessions novel from creator Lauren Shippen, asks: “What if the X-Men, instead of becoming superheroes, decided to spend some time in therapy?” (Vox)

Robert Gorham always gets what he wants. But the power of persuasion is as potent a blessing as it is a curse.

Robert is alone until a group of strangers who can do impossible things - produce flames without flint, conduct electricity with their hands, and see visions of the past - welcome him. They call themselves Unusuals, and they give Robert a new name, too: Damien.

Finally, finally he belongs. As long as he can keep his power under control.

But control is a sacrifice he might not be willing to make.

What listeners say about A Neon Darkness

What do you want?

The book and it’s obvious tones of white straight cis male privilege is very well written. I really love Lauren’s literary voice. She takes all of the character into account. You can tell that if she was asked to write their life stories, she could, because she knows them that well. That makes them easy to fall in love with. To want more of.

As for Damien, reading through his mind left me raw, questioning my own selfish needs and reevaluating how often I allow my own “want” to be more important than anyone else’s. And that’s what a book should do, because then my wanting his redemption at the end was another question - did I want it for him or did I want it for me?

Just to preface, I've listened to the entirety of The Bright Sessions, and re-listened to all the episodes Damien appears in countless time. I pre-ordered this books as soon as I could and got both the Hardcover and Audiobook.
This book is all I could ask for and more. It provides just enough clarity into the making of Damien and and the thematic death of who he once was. Voiced fantastically by Charlie Ian, you can even here the change in the last few pages. If you haven't listened to TBS before reading, this book will definitely make you just to hear the continuation of Damien's story.
Although it's advertised as a standalone, if you're like me and want perfect context and hindsight in your stories, I would recommend giving TBS a listen through beforehand, otherwise you will be thinking about what you might be missing throughout the book as it does leave some questions unanswered.
Love this character and this book and would love a continuation of his story/character development after the events of AND and TBS!!

I definitely recommend this audiobook to anyone who liked The Bright Sessions. Charlie Ian did an awesome job narrating Robert and the rest of the characters, and just like his character in the podcast, I found myself fascinated by him and seeing how he ultimately became Damien. The only nit-picky thing I have with it (and this isn't on Charlie so much as production, I think) is that there are very little pauses in between switching POV so pay attention closely. Other than that, AMAZING!!

I chose this book simply because I enjoyed The Infinite Noise. However, until I came back to my Audible account to write this review, I’d not noticed the “subtitle” of A Neon Darkness (“ What if the villain of the your story is you?”) Consequently, I had what is probably a very different experience than those readers who began the novel with the expectation of taking the antagonists’ perspective. I saw Robert, the main character, as the protagonist, and only slowly began to feel the tug of the very problematic path he was taking. I kept hoping - actually expecting - this poor kid with his so very sad and tragic personal story to grow, to take responsibility, to display genuine empathy. And I kept wishing his friends would teach him, in those times they were arguing, how to respond to criticism. That if he would only stop reacting so defensively - like a child (or, actually, most of us too often) reacts, he would recognize the opportunity he had - a real family was right there for him. So I was strung along rather exquisitely all the way to the climax hoping, and expecting, the inevitable happy ending...which of course does not happen.

I have to say I feel bad for anyone who actually saw the teaser. Why on Earth did Shippen, or perhaps the publisher, forecast the whole plot and it’s so-compelling transformation right there on the cover? I say this from the perspective of knowing absolutely nothing about these novels other than having read the first in the series, so perhaps my naïveté was rare.

In all events, the novel does so much so well, it compelled me to deeper considerations many times. From pleasurable speculations on what having and using meta-abilities would feel like, to revisiting research I’d read regarding how people respond when they gain power (in the real world). Shippen has great skill in articulating the nuances of human interactions and mixing those universal experiences almost imperceptibly with cleverly written descriptions of supernatural experiences. And her ability to flush out her main character, an young adult with incredible power stuck at the emotional maturity of a selfish five-year-old, was as rich as it was chilling.

A Neon Darkness could, in fact, have been a home run, but for one of its villains, Isiah, who is present here only as a plot device, shoehorned in here and there to move the plot in a desired direction. It’s clunky, sometimes almost preposterous, how this (admittedly frightening) mystery man appears, twirls his mustache, vanishes, and then, in the end, serves his real purpose - as the final line that must not be crossed. In such a carefully written, thoughtful work, Isiah is an real oddity, both in how shallow and predictable he’s presented to us, and in the square-peg ways he’s deployed.

There are other quibbles - Blaze should have been flushed out more, for instance - but they are minor. The interior world of the main character is so rich, you’ll forget about the little things. This was a hugely entertaining book, and an intriguing and worthwhile follow on to the enchanting Infinite Noise. I can’t wait to read number three!

The Making of a Tragic Monster

I read The Infinite Noise before I discovered the Bright Sessions podcast, and right out the gate, Damien was my favorite. Charlie Ian's drawling sneer had me in four words. I had to fight not to buy this book right away. To anyone like me, coming in already hooked, be aware that this is a prequel. The Damien of the Bright Sessions is ten years away. Instead, we are introduced to Robert, an eighteen-year-old boy who has spent most of his life using a gift for persuasion to get what he wants. But getting what you want all the time, by force, has an undeniable cost...

As a prequel, this book manages to be both illuminating and appropriately tragic. The view into his past is painful in a way that lingers, and the long-term effects on his psyche that were clear in the show are undeniable here. The arrogant, self-assumed villain is, at his heart, a hurt kid, spoiled, selfish, lonely, and completely unwilling to take responsibility for his actions. And nowhere is that clearer than right here. In addition to his usual lack of self-awareness, there is a twisted sort of innocence that just makes him more pitiable. Which isn't to say he's blameless. Everything that happens to him is entirely his fault, leaving us to stand and watch as he makes the choices that will lead him to his final path--and every step is like walking on glass.

Briggon Snow essentially described reading this book like watching a train-wreck, desperately wanting him to make the right decision, to avoid the clear end of the tracks, only to have Damien sabotage the brakes. That is entirely apt. There is a lesson here, but the trouble with lessons is that you have to want to learn. Don't go into this book hoping for more than insight, because if you know the story, you know what to expect. The road is at points piteous, and eerie, and frustrating, and utterly painful, but the journey is worth it. I would gladly read this book again, and any other book in the series.

As to the narrator: Allow me to say, with a chuckle, that I adore Charlie Ian. His work as Damien in the Bright Sessions was phenomenal, and I genuinely like his voice. That being said, he is not a narrator. As a voice actor, he's great, but as a narrator, he's just pretty okay. It's clear that he struggled to come up with voices--a fact he states in an interview, in this very book--but he does a good job! Robert does not sound like Damien, at least not most of the time, because he isn't him yet. The side-characters all sound respectably different, with Neon winning the prize for the most distinct. You can tell he worked hard on this and it's more than good. Not perfect by any means, but still very enjoyable, in part because it's him.

I don't know what I was expecting from the story, but I'm left feeling empty. The over all premise had so much potential to end the way it did. Like the author gave up on the main charter mid book and decided he was evil. maybe that's too simple and conceptually the arc is as complex as being human. there's a lot more to explore with these characters and the main character never reach completeness. There was room for romance but nothing manifested. ultimately a broken young man who fears being unlovable and abandoned ended his journey being what he feared. the people who crushed his hopes of love weren't worth his time. they held double standards and perpetuated thier own condemnation. what a dark message to put out in the world. If someone who reads this review feels similar to Rob know you're enough. everyone deserves to experience love.

This is a Prequel

After the Infinite Noise, I could not wait for this one. I am not familiar with the Bright Sessions and its characters but this was pretty good. Damian or Robert's character was an emotional rollercoaster, I was split between loving him and than hating him. This Universe of the Atypicals or Unusuals interest me and enjoy Lauren Shippen's books so far. To get a better idea of who Damian is, I've been told to check out the Bright Session's podcast, which I plan on doing.

I enjoyed the story. it's a slow and subtle burn and I suggest reading or listening to brights sessions first.

All of Lauren Shippen’s writing is incredible, written in book form or script form i’d consume it forever. The cast that she’s accumulated, including Carlie Ian, really care about their characters and you can definitely feel that through this novel. The characters are rounded and believable, easy to empathise with or for, and are acted in such a way that you feel like you’re friends with them too. Can’t wait to read (or listen to) the next book in the series and if you haven’t already, check out the infinite noise and all of the Atypical Artists podcasts.