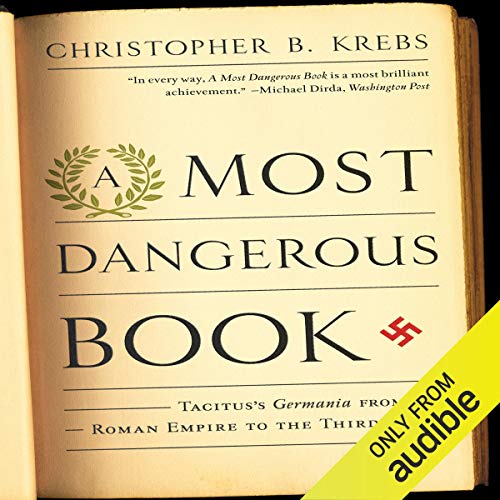 A Most Dangerous Book

By: Christopher B. Krebs
Narrated by: Mark Ashby
Try for $0.00

The riveting story of the Germania and its incarnations and exploitations through the ages.

The pope wanted it, Montesquieu used it, and the Nazis pilfered an Italian noble's villa to get it: the Germania, by the Roman historian Tacitus, took on a life of its own as both an object and an ideology. When Tacitus wrote a not-very-flattering little book about the ancient Germans in 98 CE, at the height of the Roman Empire, he could not have foreseen that the Nazis would extol it as "a bible", nor that Heinrich Himmler, the engineer of the Holocaust, would vow to resurrect Germany on its grounds. But the Germania inspired - and polarized - people long before the rise of the Third Reich. In this elegant and captivating history, Christopher B. Krebs, a professor of classics at Harvard University, traces the wide-ranging influence of the Germania over a 500-year span, showing us how an ancient text rose to take its place among the most dangerous books in the world.

What listeners say about A Most Dangerous Book

Author cites many sources, but fails to back up his own claims.

Krebs does an amazing job of summarizing the history of Tacitus' text as well as the politics of Rome at the time. He quotes many, many sources that discuss Tacitus and the Germanic tribes and tongues- many that claim those Germanen are, or are not, related to the modern Germanic people, languages and nations.

He does a well enough job of describing the language variations and evolutions of this subject, but fails to explain why he says "They are not", "He was wrong", or "This was an error." He accuses a historical figure of "unspoken chagrin" but never hints at who noticed the chagrin. In a nutshell, I cannot tell if he is putting words in other peoples' mouths.

Interpretation mightier than the quill

Fascinating weave through history. The professor delivers depth and details that keep the telling intriguing, it helps to be up on your Roman, European, Judeo-Christian history and some situational subtleties of the Catholic Church and Luther .... or at least I used my tourist level knowledge to fill in a bit and give a picture filled backdrop to the telling.

The takeaway: The power of the pen is shadowed when compared to the liberal interpretation to support ideological narrative.

I had great expectations about this book. This book provides the platform upon which a Nazi Germany constructed. I did find some of the Germanic history interesting -- for example there wasn't really a Germany until the late 1800's. I love history books and have read a great many. This author lacks the flair of a McCullough by an order of magnitude. Only the diehards of historians should brave the seven hour trek -- it is just soo boring and not work the misery.

GERMANY FROM ANCIENT ROME TO 1945

A Most Dangerous Book is an interesting academic study on the development of racial thought in Germany. The story of how a pamphlet of observations of ancient Germany, written by the Roman Tacitus, over almost 2 millennia ago was reinterpreted through the ages helped shape Nazi racial policy. The audible version was great. Performance reading clear with great emphasis on the major players.

Would you consider the audio edition of A Most Dangerous Book to be better than the print version?
For me, yes, as it is so much more tiring for me to read than to listen. But I stopped often to make notes so I can refer back to certain things, and that took time.

What about Mark Ashby’s performance did you like?
I particularly appreciated his correct pronunciation of foreign words (Italian and German in particular). So often in audiobooks, foreign names are mangled. And this book is particularly demanding in that it contains phrases in Latin and German in addition to quite a number of proper names. The reading is generally clear and moves along, which suffices to give it 4 stars; correct pronunciation of foreign words adds a star.

Any additional comments?
The book is a fascinating tour across time that traces the fortunes of one book, shedding light on divers epochs along the way. Highly recommended for those who have a real interest in history.

Excellent in:
1. Topic is well researched
2. Stylistically impeccable
3. Witty quips pop up unexpectedly but appropriately
4. Narrated beautifully with nary a mispronunciation
5. If you're interested in European history of the 20th century, read this book

What did you like most about A Most Dangerous Book?

The revelation of the afterlife of a seemingly harmless classical source.

Tacitus, obviously. Least favourite the Nazis: I hate those guys.

What does Mark Ashby bring to the story that you wouldn’t experience if you had only read the book?

Again there were production issues in not briefing the narrator adequately on pronunciation. Whilst his German was faultless, his Latin was at times execrable. This is not his fault, but down to the producer/director. Limes is pronounced 'Lee Mays' not 'Lie Meez' as we kept getting (making this listener think of Limeys, the American nickname for British troops during WW1!). A quick check with the author should have verified that.