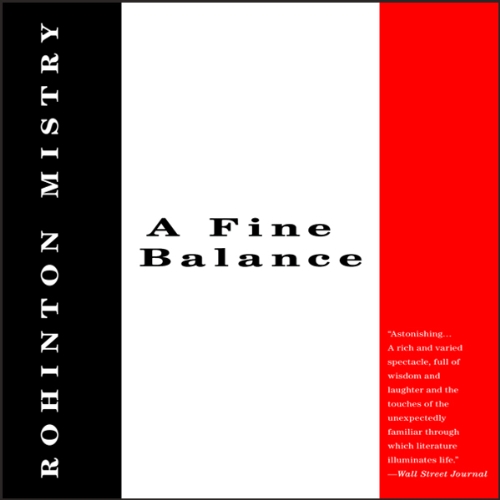 By: Rohinton Mistry
Narrated by: John Lee
Try for $0.00

With a compassionate realism and narrative sweep that recall the work of Charles Dickens, this magnificent novel captures all the cruelty and corruption, dignity and heroism, of India.

The time is 1975. The place is an unnamed city by the sea. The government has just declared a State of Emergency, in whose upheavals four strangers - a spirited widow, a young student uprooted from his idyllic hill station, and two tailors who have fled the caste violence of their native village - will be thrust together, forced to share one cramped apartment and an uncertain future.

As the characters move from distrust to friendship and from friendship to love, A Fine Balance creates an enduring panorama of the human spirit in an inhuman state.

"Mistry...needs no infusion of magic realism to vivify the real. The real world, through his eyes, is magical." (The New York Times)

What listeners say about A Fine Balance

Praise for the Narrator as much as the Writer

So many reviewers have said that the book is slow to grab the listener's ear, and I agree, as far as content is concerned. But, John Lee's rendering of the voices and the narrative is superb, and that kept me going. Also, I was extremely drawn to the subject of caste and class in 20th Century India, so I stuck it out through the first third of the book.
Indeed, the stories are extremely saddening (and sometimes quite revolting, so beware if your stomach is as sensitive as mine), which makes the book difficult to digest a lot of the time. Yet, I never had the sense that anything in it was less than believable.
Poverty is often inconceivably harsh, which is why a book like this is so important for readers born and reared in the USA to read/hear. One thing I found myself doing throughout my "listen" was reminding myself of what life was like here, in the same time periods that Mistry's characters were living through, which added to the experience for me.
I can't say I "enjoyed" the book, but I have to say I could NOT stop listening until I got to the end--even though I literally cried for the last 3 hours of it. That is how compelling the writing and the reader of this book were.

A Dickens for India: Rohinton Mistry

It's a big panorama of a novel that reminds me of Dickens: the intricate plot with lots of coincidences and characters than come back a convenient (or inconvenient) times, colorful secondary characters with names like Worm, Monkey Man, and Beggarmaster--and damning social criticism.

The novel takes places mostly in 1976, with lots of backstory on the characters and an epilogue from 1984. Those are the years of Indira Ghandi, a period called in the novel "the emergency", when social programs intended to modernized the behemoth country turned into terror for ordinary citizens, mostly poor people. A "beautification" program causes those who had built illegal shacks on waste ground and rented them at exorbitant rates to turn into government workers who collect the "homeless" and take them--no questions asked--to a hard labor camp, after bulldozing the shacks. A "birth control" program in the hands of local inforcers turns into forced sterilization at camps set up outside of town where surgeons are forced to operate on men and women against their will, even with sanitary conditions are compromised.

In the midst of the colorful and busy scene--in fictional places--four characters dominate: Dina who was terrorized by a well-meaning older brother, widowed after 3 years of marriage and who was then determined to support herself and remain independent; Maneck, a young college student from a Northern hill station, who can't stand the filthy college hostel and rents a room from Dina who was a school friend of his mothers; and Ishvar and Om, uncle and nephew, tailors who came from a small village where the family had already experienced much tragedy as a result of ancient persecution of those from the untouchable caste. These four slowly learn to trust and love each other and find happiness in a most unusual household--for awhile before additional tragedy befalls them.

The enfolding of the story and the development of the characters was nothing less than masterful.

This was a devastating and beautiful book--extremely well done. Worth the energy and emotion you expend as a reader. The reading is also very well done. Added much to the experience. This is the kind of book that should be heard, not silently read.

Mistry's novel is slow to start, and the characters at first seem kind of boring. But the genuine humanity of both Dina and Ishvar is hard to ignore and after a while sucks the reader into their lives. And one could say these two characters are the foundation of the book. Mistry has drawn such compelling figures, that it's hard not to be drawn into the story of their all too brief happiness and their all too great hardship. And this is where the "Balance" or imbalance comes in. The book is built around semi-alternating episodes of happiness and hardship, and the title refers to the balance they create in life. They each reinforce and justify the other. But the balance is hardly fine in this book. Even though it is a great story, which brings to mind the oft-referred to Dickens in its scope and subject, it is not a happy one. The abject poverty of the country comes alive. Indeed some of the most compelling characters of the novel are background characters who at times upstage the central ones in their vivid portrayals. But it seems for every vivid character we are shown an equally vivid harship. And these hardships, one might say, upset the balance and outweigh the happiness. But then maybe that's the point. The bright parts of the book, however small, must carry the characters(and the reader) through the dark parts because that's all they have and they must make do with it.

This is a stunning novel. Had I read it a few years ago I would still have thought so. But, since it deals with a very specific time in the political history of India, I might have felt more detached than I now do.
Americans would do well to read this book, not only for its intrinsic merits but because it should warn us about the consequences of allowing our own political system to grant itself emergency powers. To me, this is no longer the sort of thing that happens only in "third world" countries.

One of the best novels ever written

At first, I had trouble "getting into" this book - a lot of foreign names to sort through. However, I kept listening and got completely engrossed in it. For sure, this is one of the greatest work of literature of our times, and I don't declare it lightly. What an amazing portrait of humanity with all its flaws, a slice of life painted with masterful strokes. The destinies of main characters - a widow, two taylors, and a college student intersect for a year.They become an unusual family of sorts, enjoying companionship, friendship and mutual support.
The book has a very sad ending. It is probably more true and realistic then the "good" endings I like to enjoy at the end of stories. Do not miss this novel, it is a true gem.

John Lee's reading of this novel is magnificent! The book is heavy in dialogue and he gives a unique voice to each speaker. There is a musical lilt to the English spoken by the characters and Mr. Lee seems to be spot on with his reading.

The novel itself is a Dickensian struggle against societal injustice. Along the way one learns much aboutIndia in the second half of the 20th Century. The caste system, religious conflict and the tyrannical regime of Indira Gandhi are just some of the subjects woven into the story. One word of warning--don't expect a warm fuzzy ending. Mr Mistry is relentlessly realistic.

This book is absolutely wonderful. Rohinton Mistry is a writer who's talent is so masterful that you barely notice his presence. He simply relates the story, clearly, honestly, with delicacy and brutality. In my opinion, perfect.

Others compare him to Dickens, and yes I do see why. But there is a difference as well. Mr. Mistry does indeed have his own style of grace.

Do not expect everyone in this story to live happily ever after. This is no fairy tale or romance novel. The characters struggle and suffer, living the reality of third-world hell. Don't let this discourage you however. This is one of the best books you will find anywhere.

This is a beautifully written story of India, with vividly drawn characters who you will care about. You will also be heartbroken by this book, so if that's a problem, skip this book. If you're in it for the excellent writing and truth about how brutal life in India often is, then you should jump in.

It took me a while to get into this book, it is relentlessly grim - BUT the four main characters eventually steal your heart. After I finished the book, it took me days before I shook off it's sad mood. The book is also an interesting window on India's upheavals in the 70's. The writing is so vivid, often you feel you are right there with the characters. A fantastic book.