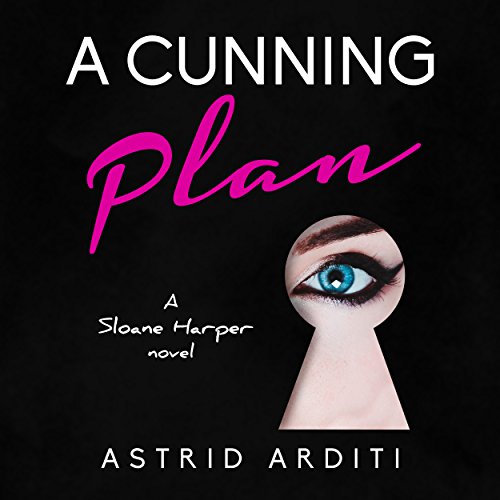 Determined to put her family back together, Sloane Harper stalks her ex-husband and his annoyingly stunning mistress, Kate. But she's not the only one. Handsome IRS agent Ethan Cunning is surveying them too, but not for the same reasons. He is attempting to nail Kate's playboy boss. Ethan and Sloane decide to help each other, which sends Sloane's wobbly life spinning out of control. She'll have to face danger, humiliation, and, scariest of all, the dating scene to lure her daughters' father home. Losing control was the best thing to happen to Sloane...until it turned lethal. The Sloane Harper series is a laugh-out-loud rollercoaster that will appeal to fans of Janet Evanovich, Stephanie Bond, and Donna White Glaser.

What listeners say about A Cunning Plan

This story is in the same vein as Janet Evanovich's Stephanie Plum series, but I think this soft-boiled heroine shows more growth (it's more like the first Stephanie Plum book, One for the Money). There were some twists I didn't see coming. I liked the secondary characters and would like to see more of them in the rest of the series. I would particularly like to see more of Alena and learn how she dealt with the aftermath of what happened in this story. I enjoyed the Cinderella aspect, and I hope for more romance in the sequel. The mystery was solved and most of the ends were tied up in this book, but don't expect a HEA like you would see in a romance. I would classify this more as a fun mystery or chick lit. There were a couple of places where the author lost me, like with all the WASP references. At least, I assume she was referring to WASPs. That's one of the drawbacks of audiobooks, not being able to see the spelling or capitalization of words.

As far as the narration, Salinas shows promise, but she over-enunciated throughout the audiobook and mispronounced some words. She did read with feeling and expression, and her character voices were all right.

interesting, different could be better

Some humour, slightly suspenseful and romance all in one, I actually laughed out loud on the odd occasion and I enjoyed the banter between Claudia and Sloane’s mother, but I found the book itself is rather slow, with nothing really happening at all but Sloane going on about wanting her husband back but there are a few fun and interesting moments.

This was a fun listen to on audio. It moved along at a good pace, with characters you could imagine and mostly like. It was amusing and entertaining and although a little daft in places, with the way the character of Sloane Harper had been portrayed you could imagine these things happening to her. I will definitely be looking out for the next in the series.

The book, had I read it, would have got 4 stars. It's an amusing, fast paced story with likeable characters. A well written debut novel and a good example of the chick lit genre. But I listened to it on Audible. The narrator's voice made my teeth hurt, maybe it's just a US accent not appealing to a UK audience. Then, in chapter 3, when she said 'row', as in boat, instead of 'row' as in argument, that really annoyed me. I would read another Astrid Arditi book, or listen to an audio version, but not with this narrator

Great romantic mystery with a lot of humour

A cunning plan is a romantic mystery with plenty of laugh out loud moments. Sloane's character is very realistic; she is a loving mother, funny, somewhat naive and desperate to get back together with her ex-husband.The story is well written, fast paced and easy to follow. My favourite was Claudia, the Polish housekeeper: she is straightforward, quick with her ironic responses, caring and a reliable friend. I found her sarcasm very amusing. I hope she appears in future books as well.
The audiobook narration was brilliant; I would definitely recommend listening to it.