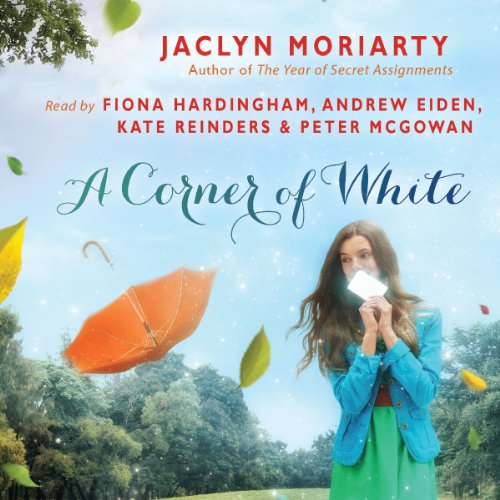 A Corner of White

The first in a rousing, funny, genre-busting trilogy from best seller Jaclyn Moriarty!

This is a tale of missing persons. Madeleine and her mother have run away from their former life, under mysterious circumstances, and settled in a rainy corner of Cambridge (in our world).

Elliot, on the other hand, is in search of his father, who disappeared on the night his uncle was found dead. The talk in the town of Bonfire (in the Kingdom of Cello) is that Elliot's dad may have killed his brother and run away with the Physics teacher. But Elliot refuses to believe it. And he is determined to find both his dad and the truth.

As Madeleine and Elliot move closer to unraveling their mysteries, they begin to exchange messages across worlds - through an accidental gap that hasn't appeared in centuries. But even greater mysteries are unfolding on both sides of the gap: dangerous weather phenomena called "color storms;" a strange fascination with Isaac Newton; the myth of the "Butterfly Child," whose appearance could end the droughts of Cello; and some unexpected kisses...

What listeners say about A Corner of White

Jaclyn Moriarty is a fantastic writer with a very unique voice. Everything about this book is a little peculiar in the best possible way. I found the world of Cello and the protagonist's mission to solve the mystery of his lost Father to be my favorite parts. But also very dear to me was the Sheriff of Bonfire!

Madeleine's story holds some of the funniest bits, considering the conversations between her two friends, and her letters back and forth between her and Elliott. But the mystery of Madeleine and her mother I found to be a little confusing. Very moving and well written but the mystery it's self is confusing and I think it isn't quite fully explained, though I suppose that's why it's Book 1!

The Narrators were all terrific! Andrew Eiden (Elliott) was an absolute awesome narrator, everytime I heard him start a chapter I knew it would be good. His portrayal of Elliott is spot on but more impressive was his ability to inhabit the old Sheriff Hector Samuels with the age and wisdom that's usually hard to get from a young narrator. Fiona Hardingham (Madeleine) was also fantastic. Her ability to bring feeling to even the smallest of sentences was great, it seemed like you could cry out loud or burst into laughter at any moment, and she rode that fine line delicately and consistently. Kate Reinders (The Princess sisters) was HI-Larious, and Peter McGowan (the travel guide voice) was perfect!

Wow, I didn't mean to go on for so long but as soon as I got started I couldn't stop! Loved this book and can't wait for Book II....

Start to a great series

I just finished listening to all three in this series. The first book is a bit slow, but the entire series is well worth the time and credits. Delightful series that really just begin in the last chapters of the first book.

Jaclyn Moriarty has created a unique story that captures you almost instantly. Her writing is beautiful and poetic, infusing the world she created with emotion, humor, and vivid detail. I also enjoy the originality of her world---this isn't just another stock YA novel and certainly wasn't something I'd read before! Although all of the narrators are excellent, Fiona Hardingham's narration brings the story to life. You can tell that she really understands her characters, their personalities, and their emotions. I first listened to this on loan from the library in August, and a few days ago I decided I had to own it so that I could listen to it again right away! I've also since been listening to anything I can find that's narrated by Hardingham---strongly recommended are Maggie Stiefvater's "The Scorpio Races" and Sabaa Tahir's "An Ember in the Ashes"!

To Appreciate Read till the End!

I really struggled with this book. I guess basing my expectations on the kind of books written by the author's sister, Liane, was unwise and unfair. Nevertheless, after several chapters, I did try to think about the book/story independently of any other book I've read but found that I just couldn't connect with the book. The main two storylines running parallel to each other seemed too fictitious and confusing in a way that prevented me feeling part of either world! The only thing I could relate to was the awful English weather.
BUT there was a thread, albeit a thin one, that kept me hanging on to the story and slowly, very slowly, the story started to gain ground and build into something more believable, stimulating and entertaining. The last quarter of the book held my interest by a rope and by the end of the book, I had a real appreciation for both the author's unique style and the story that I gave serious thought to moving on to the sequel with haste.
The performances by the various narrators were spot on, accurately reflecting the author's style and intentions I think.
Would I recommend this book? Well yes, to a selected, patient few.

Awful. Could not listen. Not into science fiction. Big mistake. Not what
I thought it would be about.