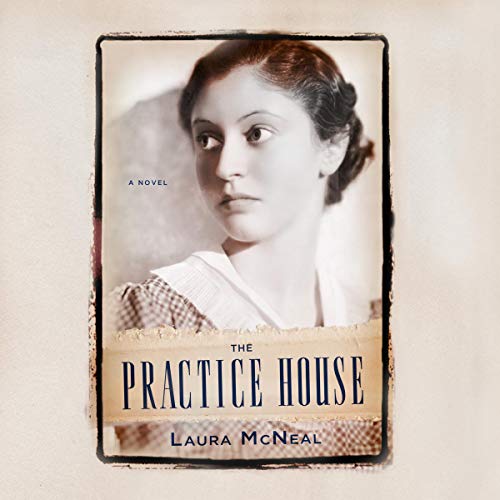 By: Laura McNeal
Narrated by: Angela Dawe
Try for $0.00

Nineteen-year-old Aldine McKenna is stuck at home with her sister and aunt in a Scottish village in 1929 when two Mormon missionaries ring the doorbell. Aldine's sister converts and moves to America to marry, and Aldine follows, hoping to find the life she's meant to lead and the person she's meant to love.

In New York, Aldine answers an ad soliciting a teacher for a one-room schoolhouse in a place she can't possibly imagine: drought-stricken Kansas. She arrives as farms on the Great Plains have begun to fail and schools are going bankrupt, unable to pay or house new teachers. With no money and too much pride to turn back, she lives uneasily with the family of Ansel Price - the charming, optimistic man who placed the ad - and his family responds to her with kind curiosity, suspicion, and, most dangerously, love. Just as she's settling into her strange new life, a storm forces unspoken thoughts to the surface that will forever alter the course of their lives.

Laura McNeal's novel is a sweeping and timeless love story about leaving - and finding - home.

What listeners say about The Practice House

I wasn’t sold till Scotland and NY was behind Aldine—those parts felt almost superfluous to the story. But I kept listening because Angela Dawe is my favorite female audio narrator. As soon as Aldine gets to Kansas, the story picks up.

I could have listened to an entire book about Aldine, but the book takes a turn and we end up with the POVs of all the Price family members. I was especially impressed how McNeal took unlikeable characters seen from Aldine’s POV, who became much more sympathetic when we were in their heads. Nevertheless, it did not make Aldine an unreliable narrator, the reader just understands the character’s motivation better.

I don’t want to give any spoilers, but the book went in many directions that I didn’t expect, all of which were interesting and satisfying. Also loved the historical details of time, place, and events.

Didn’t think I would like this, but I loved it. Realistically told story, with intertwining characters. A great understanding of the “dust bowl” in Kansas and it’s affect on families and farming. Would read another story by Laura McNeal and “loved the Scottish” lilt by Angela Dawe.

The book captures the history of Kansas in the 30's and the migration following the drought. Exquisitely written and touching. This will touch my thoughts forever. The narrator was amazing

What disappointed you about The Practice House?

The story was not interesting. I kept waiting for it to get that way and it never did. None of the characters was I ever invested in their welfare, most I found terribly annoying making one bad decision after another or just having an endless string of bad luck. The writing style to make each character a point of view character was unnecessary. Knowing the boring lives of all the characters did not make it more interesting and sometimes just made it difficult to follow.

Has The Practice House turned you off from other books in this genre?

Yes. I used to read this type of book more so perhaps i'm just finished with this type... Sad, uneventful stories about everyday life and mistakes. I read to escape normal life, however, my life is a party compared to these characters.

Have you listened to any of Angela Dawe’s other performances before? How does this one compare?

No. her performance is well done. Her voice is sad as suits the characters. Only her reading of the youngest child was a bit grating and loud.

Disappointment and annoyance. I can't really even say sadness because the characters were not compelling enough to cause me to feel their pain.

I really feel bad giving such a harsh review but I take other's reviews seriously. I'm sure the author worked hard on this book and others may really enjoy it. Sadly, for me it was an experience of waiting too long for it to get interesting and then just wanting it to be over but not feeling I could just stop because by then I had too much time invested to not finish it.

My kind of book, a little bit of everything.

Loved it! Wasn't a sleeping pill. Most are. Thanks for the story. Wonderful done WOW.

I was a bit confused at the beginning - I couldn't keep the sisters apart, but after that there was no confusion. I loved the way the author described the people and surroundings. I felt as though I could see, hear and taste what was happening. She was able to make you love and hate a character, all at the same time. Without giving anything away, I wish there was another book telling about the characters lives in the periods of time that aren't covered. I'll be thinking of them for a long time.

I am not able to read books very often due to migraines. I loved to read and most of the books have not been as engaging heard versus read. This is not one of those books. I will listen to this work again just for pleasure.

This is a wonderful journey through time. This was a time many of us know nothing about. A farmer's love for his land, a woman's love for her children, I teacher's love for her students. Selfishness, intrigue, young love, lost youth, so many things are covered. The book is well researched into the period of time in which it takes place. The characters are believable, understandable, lovable, hate-able.

The narration is amazing, the voice changes are perfect the different sounds for different characters are recognizable by voice alone. Really excellent job of narration.Hats off.

I have listened to HUNDREDS of audiobooks, and Angela Dawe is now one of my favorite fiction readers ever.

The book is very well written, interesting bits of history well woven into an absorbing story. I had a little trouble being convinced of the motivation for some of the characters' actions, which is the reason for 4 stars. The reading takes it up to 5 stars.

This is one of those books that tricks you into thinking it's going to get better, but it never truly does. Chapter after chapter I was waiting to get to know the characters more, and finally get the sense of emotion from any of them, but nothing! Don't expect it either if you decide to invest your time into a book that really goes no where.

I didn't find any of the characters likable, and no matter what bad thing happened to them, they responded to their circumstances coldly and without emotion. They ended up driving me crazy. The one redeeming factor to this was the narrator - she was very good and nailed her accents. I bought this after reading the reviews and I'm really surprised that people found this book 'gripping'. It's intriguing but leaves you empty for wanting a lot more.

Yes, I loved the story. It was very well written and the author somehow captured the kind of haunting quality I associate with the finest Scottish authors.

I liked all the characters and could feel empathy for their situations.

Sometimes her Scottish accent was a bit off the mark but I loved her voice and felt she covered the range of characters from children to men very well indeed.

I felt the tears pricking at my eyes at the very end when Clare realizes who the mystery visitor is.

I would recommend this audiobook. It was so well written and narrated that it filled me with a nostalgia for a place and time I have never experienced in real life. To me that is a remarkable achievement for any author.