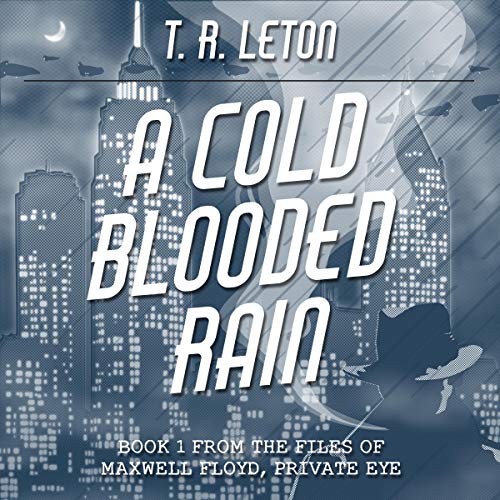 A Cold Blooded Rain: From the Files of Maxwell Floyd, Private Eye

It has been one hell of a fall from grace for former Homicide Detective Maxwell Floyd. He’s hit rock bottom. Broken, bleeding. It took only a New York minute to change his life forever — his marriage, career, and sobriety left to die in the aftermath. He thought he could still make a difference as a private eye, but all the alcohol in the world can’t keep the ghosts of his past from haunting him.

Enter Mr. Fletcher, a secret envoy from the police commissioner’s office. He offers Max the opportunity to set things right and hires him to solve the recent and brutal murder of a famous young woman. The catch: Max must use his own resources while staying out of the NYPD’s way. Wary, yet desperate for redemption, he jumps at the chance.

Max’s investigation quickly becomes a race to stay one step ahead of the NYPD detectives assigned to the case. Not only are his name and integrity at stake, but also his life once he finds himself a target of the vicious killer.

While clues are scarce, personal problems abound, threatening to derail him for good. To make matters worse, it becomes clear Mr. Fletcher hasn’t told him everything. Max doesn’t know who to trust as he's forced to come face to face with his most dangerous enemy. Himself.

A Cold Blooded Rain, the award-winning, debut novel by T. R. Leton, is a new addition to the great classic hard-boiled detective tradition of Dashiell Hammett and Mickey Spillane, with a dash of the future noir tradition of Philip K. Dick.

What listeners say about A Cold Blooded Rain: From the Files of Maxwell Floyd, Private Eye

Drags on in spite of good narrator

The writer does a good job of setting the scene and with detail. Lee Strayer, as usual, does a great job as narrator...

Unfortunately, the story is really slow. It seems like we're subjected to literally hours of Max being drunk and convincing himself that it would be wrong to have any kind of relationship with the several beautiful women who think otherwise... but we never quite know why. I think if the fat was trimmed we might have an engaging 4 or 5 hour book here.

To complete the positive - negative - positive sangwich, I will say that the work does have a bit of the Sam Spade / Phil Marlowe feel to it.