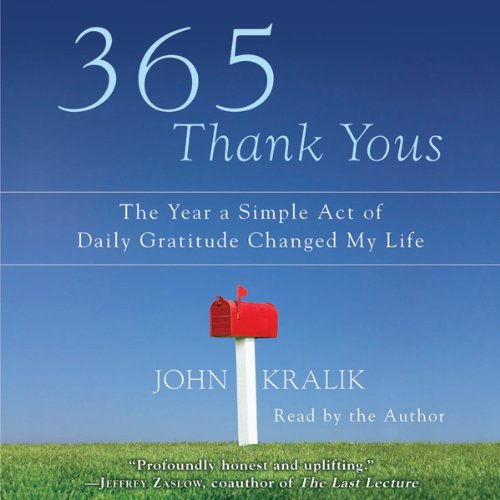 One recent December, at age 53, John Kralik found his life at a terrible, frightening low: his small law firm was failing; he was struggling through a painful second divorce; he had grown distant from his two older children and was afraid he might lose contact with his young daughter; he was living in a tiny apartment where he froze in the winter and baked in the summer; he was 40 pounds overweight; his girlfriend had just broken up with him; and overall, his dearest life dreams—including hopes of upholding idealistic legal principles and of becoming a judge—seemed to have slipped beyond his reach.

Then, during a desperate walk in the hills on New Year’s Day, John was struck by the belief that his life might become at least tolerable if, instead of focusing on what he didn’t have, he could find some way to be grateful for what he had.

Inspired by a beautiful, simple note his ex-girlfriend had sent to thank him for his Christmas gift, John imagined that he might find a way to feel grateful by writing thank-you notes. To keep himself going, he set himself a goal—come what may—of writing 365 thank-you notes in the coming year.

One by one, day after day, he began to handwrite thank yous—for gifts or kindnesses he’d received from loved ones and coworkers, from past business associates and current foes, from college friends and doctors and store clerks and handymen and neighbors, and anyone, really, absolutely anyone, who’d done him a good turn, however large or small. Immediately after he’d sent his very first notes, significant and surprising benefits began to come John’s way—from financial gain to true friendship, from weight loss to inner peace. While John wrote his notes, the economy collapsed, the bank across the street from his office failed, but thank-you note by thank-you note, John’s whole life turned around.

Featured Article: The Best Listens on Practicing Gratitude for Adults and Children Alike


Let's be honest—it can be hard to make time for conscious gratitude...sometimes it’s hard to even understand why you should be grateful for anything at all. But focusing on thankfulness can have rewarding effects on a person’s health—mentally, spiritually, and even physically. The following audiobooks offer helpful ways to practice gratitude, and insights into why it’s vital to do so, with listens for both children and adults.

What listeners say about 365 Thank Yous

Even during the saddest parts of Mr. Kralik's story, I could not help but feel peaceful and happy at how this journey was unfolding. He inspired me to find at least one thing to express my gratitude over every day. Thank you, Mr. Kralik, for sharing your personal tale with the rest of the world. Having experienced such a personal low and finding a solution to it and sticking it out will make you a judge that will have empathy tempered with the justice handed down.

What made the experience of listening to 365 Thank Yous the most enjoyable?

I loved the content of this book, and I'm planning on using it to change my life. I have already begun to apply the principles and see new opportunities for joy in my life coming my way.

What was one of the most memorable moments of 365 Thank Yous?

The first thank you - to his son.

Would be helpful to have more animation in his voice. Sometimes I was lulled to sleep by the sort-of monotonous tone.

Change Your Life AND the Lives of Others

A great read, principles one should live their lives by. Will be reading a few times over.

Left me with a lot to think on. I have missed lots of opportunities to write notes, I guess now is the time to get started.

Thank you so much for writing this.

I just recently spoke at a women's brunch regarding the power of gratitude. I stumbled upon this book as a part of my research. In my research, I discovered that there is a science associated with the benefits of gratitude. I did not finish reading this book until after my event. I am so inspired to do just the same thing that the book models. What an AWESOME idea! I have so much to be grateful for and so many people to whom I need to express my gratitude. This has catapulted me into doing just that. Thank you, Mr. Kralik!

Thank you for writing 365 Thank Yous and for publishing your personal thank you notes to your family and friends. Grateful for all you shared and inspired to continue writing thank you notes to everyone who has made an impact in my world.

It is amazing how a simple act of sending kind words in a written card, can change the trajectory of both parties involved.

I am very inspired by this story. I grew up writing Thank You notes and have periodically continued in personal and professional life, but want to get better at expressing my gratitude.
So glad this story was shared and I will be recommending this book to many.

A feel good story with such a great message that is important for all of us.

Everything meshed with this book! It’s a game changer! Written and spoken with total sincerity- from the HEaRT! If read or listened to while in desperation, hopelessness or just with a strong willingness to change anything and. Or everything, read this one! Like I wrote earlier, I believe this one changes the game - it can change lives! Truly inspired! Enjoy! Ps: the one ya don’t want to end!!!