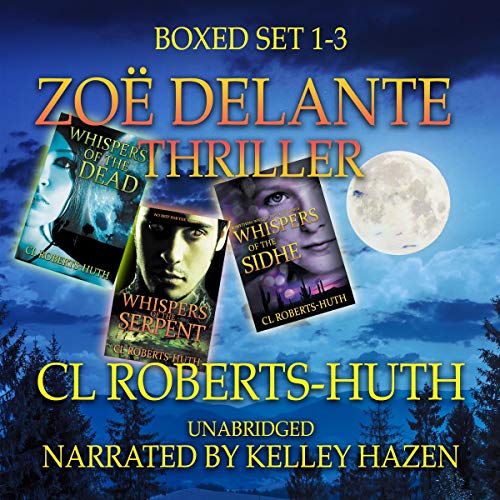 No rest for the Wiccan.

Whispers of the Dead

The hunt for a murderer unfolds, dropping Zoe right in the middle of a power struggle between a nightmare of a coven, and a serial killer leaving bodies in ceremonial circles in the rural parts of Baltimore's city limits. A race against celestial bodies and the trail of earthbound body parts keeps our intrepid clairvoyant running right until the very end.

Whispers of the Serpent

Who is murdering babies in the Baltimore/D.C. area? For Zoë Delante, police clairvoyant, things gets personal when her one-year-old niece ends up missing. Someone is using magick to control and kidnap people, and they keep finding strange scales at all the crime scenes. Armed with stronger magick and new allies, everyone's favorite Wiccan races to unravel this mystery. But will it be enough?

Whispers of the Sidhe

What Wiccan games we play. Some wounds never die.

A phone call sends Zoë Delante across the country to unravel a deep, personal mystery. Between her father's dead body, and a powerful ghost girl calling for help, she should clap, because faeries are real - and dangerous. Can everyone's favorite Wiccan figure out what's going on before the supernatural forces gathering around her take her down?

Evolved Publishing presents a suspenseful, thrilling glance inside one woman's extraordinary connection to the elements around her, in a special edition boxed set featuring the first three books in the action-packed, paranormal Zoë Delante Thrillers series. (DRM-Free)

I had the opportunity to listen to each book in the Zoë Delante series individually. Now you can get them all together in this new box set.

C.L. Roberts-Huth will keep you drawn in with the full range of emotions as you progress through the stories. A thrilling series that falls on the darker side.

Kelley Hazen is by far one of my favorite narrators. She has the uncanny ability to voice so many different characters and bring out their personalities and emotions perfectly.

I was voluntarily provided this free review copy audiobook by the narrator and found it very interesting.    If you like books about witches and monsters, you'll like this series.   Throw in the police and a good mystery and that is what you have here.  Well written and unique characters along with a fast paced plot will keep you listening.  As you read through the books, the emotions felt will range from total joy to devastating grief as the story pulls you deeper under its spell.  It's great that they come in set.

This audiobook is very interesting. It is a box set of three paranormal thrillers but it is so much more than that. The first book is relatively straightforward. Zoë Delante special skills that make her an asset to the homicide department in solving murders. She starts as a gifted human in this book but things just get weirder from there. The paranormal elements get progressively more prominent with each book and the plot morphs from simple police work to something a lot darker and more "fairy" like. There are lovers and best friends, family and so on that make the story human but then the paranormal parts slip in and suddenly the story takes on a surreal feel. That said, I like Zoë. She is a sassy, highly intelligent and gifted woman I would not want to mess with!

The story was well narrated with small sound effects and such that take the experience from a simple storytelling to a performance.

enjoyed the different storylines. got a bit full on with the trio relationship but otherwise good.