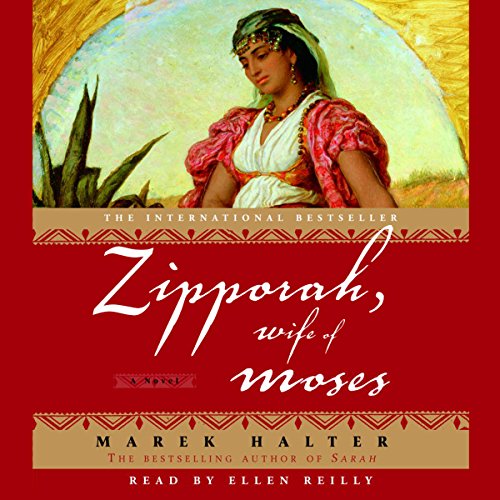 By: Marek Halter
Narrated by: Ellen Reilly
Try for $0.00

From the internationally best-selling author of Sarah comes the riveting story of the remarkable woman who walked beside Moses.

Although she is a Cushite by birth - one of the people of the lands to the south - Zipporah grew up as the beloved daughter of Jethro, high priest and sage of the Midianites. But the color of Zipporah’s skin sets her apart, making her an outsider to the men of her adopted tribe, who do not want her as a wife. Then one day, while drawing water from a well, she meets a handsome young stranger. Like her, he is an outsider. A Hebrew raised in the house of the Egyptian Pharaoh, Moses is a fugitive, forced to flee his homeland. Zipporah realizes that this man will be the husband and partner she never thought she would have.

Moses wants nothing more than a peaceful life with the Midianites, but Zipporah won’t let Moses forget his past - or turn away from his true destiny. She refuses to marry him until he returns to Egypt to free his people. When God reveals himself to Moses in a burning bush, his words echo Zipporah’s, and Moses returns to Egypt with his passionate and generous wife by his side.

A woman ahead of her time, Zipporah leaps from the narrative of this remarkable novel. Bold, independent, and a true survivor, she is a captivating heroine, and her world of deserts, temples, and ancient wonders is a fitting backdrop to an epic tale.

"Halter includes many rich cultural details and plenty of steamy sex, and he strikes a balance on miraculous occurrences, offering plausible ideas for some while leaving others open to divine activity." (Publishers Weekly)

What listeners say about Zipporah, Wife of Moses

This author used Bible characters to perpetuate and spew a very jaded view of those times, full of despicable prejudice. In this readers opinion, it serves no useful purpose to imagine heart & soul searing wrongs as this world has offered plenty of actual horrors and wrongs done & is still being done, to be fodder for writers. The addition of some inappropriate sexuality has caused me to decide to never read (or listen to) this writer again! This would never be labeled “Christian” fiction if I were the editor.

I am a collector of books and stories about women of the Bible. I enjoy them immensely, and try to envision what their lives would be like day to day, and how I would have managed and survived in their place. I also look for what I can learn from their lives and experiences.
I understand the idea of author’s license and recognize how it fills a story with life, color and perspective. What I don’t understand is the killing of the two sons of Moses and Zipporah! Their lineage is listed in great detail numerous times in scripture. They lived, and in my opinion, it was a poor choice to tell the story any other way.
I don’t know how long Zipporah lived, but I would like to envision her enjoying her grandchildren and great grandchildren, rather than as a hateful, bitter and grieving mother.
This book is not the story of Zipporah, wife of Moses. It is simply poor fiction trying to be be based on a true story.
I want my money back.

This Story does not follow biblical guidelines. I would not recommend it at all for accuracy

This book speaks of the woman behind the man. It speaks of her qualities, her strengths and her weaknesses . It shows that she was real. She was a daughter, sister, woman, wife and mother. Truly an example for females even in this modern day!!