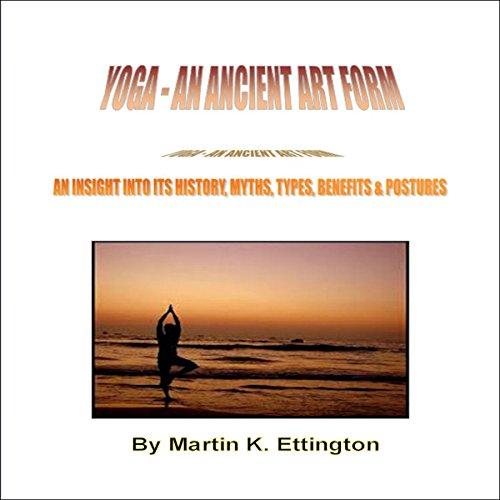 By: Martin Ettington
Narrated by: Martin K. Ettington
Free with a 30-day trial

The word yoga takes us back to the ancient times and brings to mind a plethora of images of extraordinary postures that seem impossible to attempt, let alone master. Yoga is much more than mastering the various postures or increasing your flexibility. It is an ancient practice that involves various physical stances as well as several mental and breathing exercises that cleanse our mind, body, and soul.

Initially, yoga focused on helping the community. Slowly, it changed its focus to self-enlightenment as its ultimate goal. "The traditional purpose of Yoga, however, has always been to bring about a profound transformation in the person through the transcendence of the ego," (Feuerstein 3).

Yoga is a science that has transcended boundaries, language, and culture and has got worldwide acceptance. It is estimated that over 35 million people practice yoga in America and UK. Yoga has continued to evolve over the years, and now, there are various disciplines that are practiced.

The origins, the concept, the ultimate goal, and the various benefits of practicing such an ancient art form are still unknown to many. There are many more aspects to practicing yoga than meets our eye or the many benefits that are extolled by the corporate honchos trying to expand their business and ride this relatively new fad.

Beyond the assumption that it started in India, the knowledge about yoga takes a dip into the unknown. This audiobook aims at enlightening you and takes you into the wonderful yet mysterious world of yoga.

What listeners say about Yoga: An Ancient Art Form

This is an elegant, innovative introduction and practice manual for the broader and deeper dimensions to Yoga practice.

I found this book to be very well written, and while I am still working through it, if you have an interest in yoga I believe you will enjoy this book

This book is for someone who wants to make yoga a part of their life, not just a fly by night hobby. Martin is a wonderful teacher and writer.

Transform your life! This book is amazing, I do not recommend it for beginner yogi's but for anyone that has the desire to deepen their yoga practice - get this book!

I suggest for anybody to purchase this book yoga. It has so much to offer for people who have back issues or balance lots of adaptation poses I know I took this training for 2 years and I loved it.

I found this book to be written in such an easy style yet full of detailed information about the history of yoga and how yoga applies to our everyday life. The sample practices are excellent and easy to follow with precise instructions and good photos. As the title suggests, transformative.

another great book from an amazing Yogi. Full of Yoga poses and life circumstances that can help heal the body.

This is a great book for going beyond the stretch. highly recommend for beginners or seasoned practitioners.

Great teacher. recommend for anyone looking to make yoga a personal part of their life. I am currently studying to become a yoga therapist, and this book is recommended.