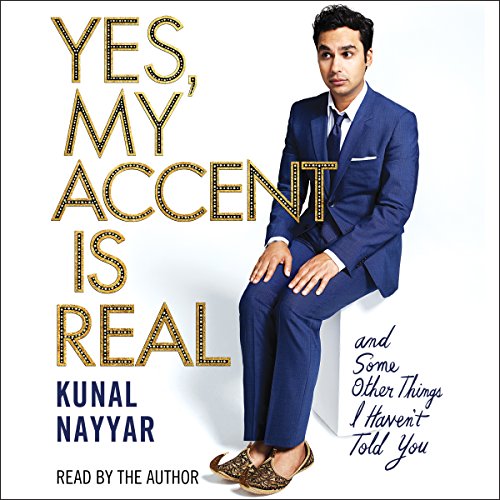 Yes, My Accent Is Real

In the spirit of Mindy Kaling's best-seller Is Everyone Hanging Out Without Me?, a collection of humorous, autobiographical essays from Kunal Nayyar, best known as Raj on CBS' number-one hit comedy The Big Bang Theory.

Of all the charming misfits on television, there's no doubt Raj from The Big Bang Theory - the sincere yet incurably geeky Indian American astrophysicist - ranks among the misfittingest. Now we meet the actor who is every bit as loveable as the character he plays on TV. In this revealing collection of essays written in his irreverent, hilarious, and self-deprecating voice, Kunal Nayyar traces his journey from a little boy in New Delhi who mistakes an awkward first kiss for a sacred commitment, gets nosebleeds chugging Coca-Cola to impress other students, and excels in the sport of badminton to the confident, successful actor on the set of TV's most-watched sitcom since Friends.

Full of heart, but never taking itself too seriously, this witty and often inspiring collection of underdog tales follows a young man as he traverses two continents in search of a dream, along the way transcending culture and language (and many, many embarrassing incidents) to somehow miraculously land the role of a lifetime.

What listeners say about Yes, My Accent Is Real

not funny but culturally interesting

This book came well recommended and so I bought it thinking that it might be like Tina Fey or Mindy Kaling's books. It was not particularly funny, but was very interesting from a racial, cultural and relationship perspective. Kunal Nayyar has a lot to share in terms of insight of relationships and his examination of the Indian culture and Hindi religion as opposed to both the Baptist and Jewish traditions in the US. overall what came through in this book was his youth. He's very young to be writing a book of this nature at this time in his career. I wonder how the book may have been written and edited differently if he we're more advanced in his career or at a different stage of life. I wonder if his perspectives might be illustrated a little differently. The telling of the book came off a little self conscious which makes sense for a young newlywed man of 34 . It was an interesting book but not one that I would recommend to anyone looking for a funny memoir of one of our favorite comedic actors.

What a treat. Reflective, endearing, candid... easy to listen to and quite engaging. I felt like Kunal was a good friend and we were enjoying intimate light hearted....wait am I still talking? Just read it.

Where does Yes, My Accent Is Real rank among all the audiobooks you’ve listened to so far?

Everything its honesty, its fun, its pace, the stages, the real and beautiful happy ending after all the journey.

Which character – as performed by Kunal Nayyar – was your favorite?

Great book. Thank you Kunal, and thanks to all the people who made it possible.

The stories weren't what I was expecting, which was funny observations about life or his career. It did have some but oddly those weren't funny, but kind of flat. What I enjoyed were his stories of culture and his youth. It's an okay read and one that would probably be best if read in small doses at a time.

I thought this might be a cool story about a kid coming over from India and finding success in America, but the tl;dr is middle-upper class boy from India gets everything he ever wanted including (and I'm not making this up) a "Miss India" wife. Kunal attempts to portray himself as relatable and humble, but he repeatedly focuses on the superficial. Just another theater geek obsessed with fame without an interesting story to tell writing a book because his agent told him to. Nothing to see here, even as a fan of the show.

Kind of a slow start, but definitely worth the read. No one else could have narrated it as well. Teaches a lot about India’s culture.

i really had high hopes for this book as i like the actor & the write up claimed it was on par with Mindy Kaling (no where near). the stories were not engaging and i found myself actually forming a genuine disgust with kunal as he seemed to be insufferable. don't bother unless you really enjoy sitting through unamusing rambling annecdotes that never reach any point of interest, amusement, or relevance. I hope that this was ghost written and that kunal is not such a self-absorbed bore as he comes across in this book.

Kunal's wit and insights into his life swept me away. From his childhood in New Delhi to his rise in fame as Raj in Big Bang Theory, he always stayed grounded using his father's words as a guide.

I loved the stories Kunal told. Very funny and very touching. I was little sad when it was over.