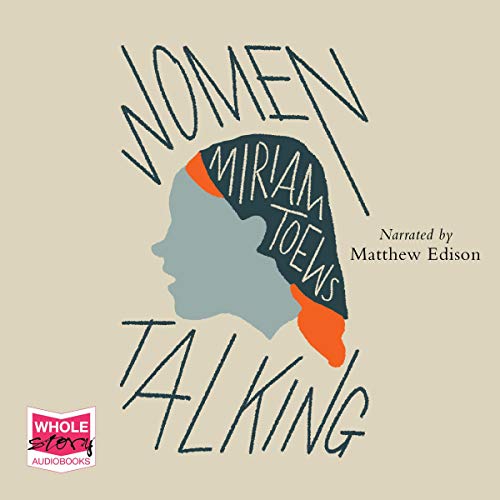 By: Miriam Toews
Narrated by: Matthew Edison
Try for $0.00

Between 2005 and 2009, in a remote religious Mennonite colony, over a hundred girls and women were knocked unconscious and raped, often repeatedly, by what many thought were ghosts or demons, as a punishment for their sins. As the women tentatively began to share the details of the attacks - waking up sore and bleeding and not understanding why - their stories were chalked up to 'wild female imagination.'

Women Talking is an imagined response to these real events. Eight women, all illiterate, without any knowledge of the world outside their colony and unable even to speak the language of the country they live in, meet secretly in a hayloft with the intention of making a decision about how to protect themselves and their daughters from future harm. They have two days to make a plan, while the men of the colony are away in the city attempting to raise enough money to bail out the rapists (not ghosts as it turns out but local men) and bring them home.

What listeners say about Women Talking

This is a moral/philosophical dilemma brought to life through dialogue and some narration but somehow is it alive, funny and utterly compelling. Feminist writing at its best, using the metaphor of a world strange to most to help us see our own struggles for freedom and safety.

I really, really rate this book in content and style

I came across the novel on a list of important reads from 2019. I had already read and enjoyed good few of them so figured I would give this one a shot and I was not disappointed!
Firstly, whilst it is a work of fiction and is a novel, it is based on true events, much like Truman Capote’s ‘In True Blood.’ It is a classic, and I’m sure ‘Women Talking’ will join it.
I had to google the story as it was not one with which I was familiar. The so called ‘ghost rapes’of 130 women and children in a Bolivian Mennonite colony. I couldn’t believe what I read. What was done to these women was absolutely horrific, and I felt more compelled to read the novel in a way to honour those women, so that they were seen.
The novel is set in a barn and is the discussion of 8 women deciding whether to leave or stay. From my position of privilege I didn’t understand how this discussion could fill a whole book! How could they stay? Why would they even want to? But of course their choice was much more complex than I could ever have fathomed. They had to consider the facts that they were illiterate, didn’t speak the language of the country, didn’t know where they were , as well as considering the consequences from their religious viewpoint, concerning forgiveness, heaven and hell whilst trying not to question a God who would allow these attrocitis to happen to them. There was also the fact that the men they left behind, the innocent and the guilty, were their fathers, brothers, uncles, and sons. Could they really walk away from their loved ones? Loved ones who would not have the skills to look after themselves the way the women had, like cooking and cleaning. There was a lot to consider.
The story is narrated by a man who had left the colony as a child but returned in adulthood, so had the ability to read and write but none of the skills needed for farming, and was therefore considered to be barely a man, weak and effeminate. He is charged with taking the minutes of these meetings between the women over the course of two days.
This is not fast paced or particularly cheerful. It is sad, painful and deeply moving, with moments of humour and light. It is a terribly important book and I’m glad Miriam Toews felt compelled to tell the story of these women, talking.

This is a profound and deeply moving story, made more so by being based in truth and spending its time examining truth.
It is also real, and funny in places. The characters and the interplay between them is disturbingly accurate!
I may have finished this book, but it’s so thought provoking that I know it’ll be a long time until it’s finished with me.

this is an English-lit book

I enjoyed this book, and can see that if I was better versed in analysing and comprehending literature, I'd get a lot more out of it. so I'm rating it 5 stars, because I think for people looking for a book to think about and analyse, it is perfect.

that said, it's not a very fun or plot heavy book. I wouldn't reccomended it for a casual listen