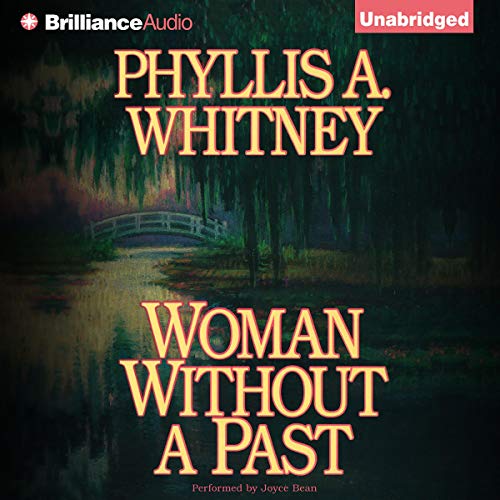 Woman Without a Past

By: Phyllis A. Whitney
Narrated by: Joyce Bean
Try for $0.00

In her 35th novel of psychological suspense, Phyllis A. Whitney spins a spellbinding tale of a young woman's quest to uncover her true identity.

Successful young mystery novelist Molly Hunt, raised by adoptive parents on Long Island, is stunned when a chance encounter leads to a startling revelation. She is apparently the daughter of the aristocratic Mountfort family of Charleston, South Carolina, kidnapped as an infant from their ancestral home - and has an identical twin sister.

Travelling to Charleston, Molly meets her delicately lovely long-lost twin; her mother's stern cousin, now the family patriarch, doubtful of Molly's identity and suspicious of her motives; and his tiny, enigmatic wife, a psychic who channels the spirit of a man who died mysteriously on the Mountfort estate a generation before.

As Molly searches for the truth of her own origins, she comes to realize that the secrets of her troubled family's past have a strange and powerful hold on the present. Her reappearance in the lives of the Mountfort clan sets in motion events that threaten the family's very existence - as well as her own.

"The beloved Whitney romance/suspense formula in its umpteenth manifestation: sensible heroine (although given to thrills of fear); a quite decent mystery; and a Michelin-style tour of the latest setting." ( Kirkus Reviews)

What listeners say about Woman Without a Past

It was good. I really liked it. Phyllis Whitney has always been a favorite of mine.

The narrator was talented enough to have subtle differences in the accents of the varying characters so it was easy to know who was “speaking”. It made me sad with the initial backstory of a stolen baby, but of course, it all turns out well in the end. Very interesting story!

A marvelous mystery exposing old wealth in one family!

A marvelous mystery exposing dark secrets inside a family with old, old money! An author by trade, Molly Hunt writes mysteries. One morning, as she waited for her publisher, she meets a man awhile convinces her to lunch with him. Over lunch he reveals that he is engaged to her identical twin. And, he is sure Molly is her stolen twin sister. Charles persuades Molly to meet the family in Charleston, SC. There she can find out for herself. When she decided to investigate for herself, going to South Carolina on invitation
... And, that’s when the mysteries begin begin to unfurl. I could hardly put this book down. The narration is excellent it will be a book I will reread and later read it again. Recommended!

Not what I expected from Phyllis A. Whitney

What could Phyllis A. Whitney have done to make this a more enjoyable book for you?

Be a little more realistic about the mother's reaction to the lost child.

When the main character was lost in the theatre and tripped. This was suspensal.

Did Woman Without a Past inspire you to do anything?