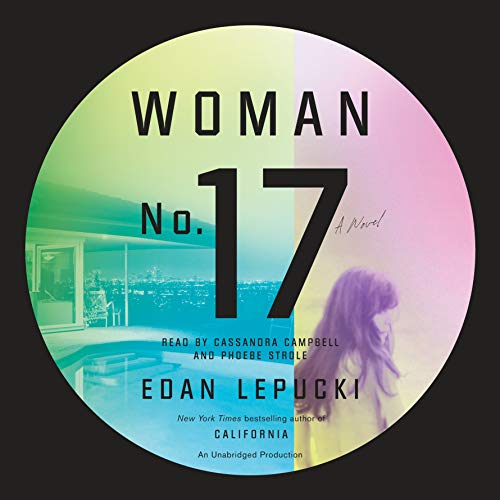 By: Edan Lepucki
Narrated by: Cassandra Campbell,Phoebe Strole
Try for $0.00

"A juice box of suburban satire laced with Alfred Hitchcock” (The Washington Post) - a novel of art, motherhood, and the intensity of female friendships, set in the posh hills above Los Angeles, from the New York Times best-selling author of California.

Named one of the best books of the year by:

High in the Hollywood Hills, Lady Daniels has separated from her husband. She’s going to need help with their toddler son if she’s going to finish the memoir she can’t stand writing. From a Craigslist ad, she hires S, a magnetic young artist, to live in the guesthouse behind the pool, take care of Lady’s young son, and keep an eye on her older, teenage one. S performs her job beautifully and quickly draws the entire family into her orbit - but she isn’t exactly who she seems. As Lady and S grow closer, old secrets and new betrayals come to light, jeopardizing what they hold most dear.

“Woman No. 17 is propulsive and moving, and considers vital questions with empathy and sly intelligence.... A winning novel.” (The New York Times Book Review)

“Lepucki’s exploration of personal relationships takes on an increasingly noirish tone: Much like Chekhov’s gun, a swimming pool introduced early in the book takes on the shadows of a floating body long before the reader realizes this might be a possibility.” (Elle)

“While Woman No. 17 does possess all the trappings of a frothy page-turner - stormy arguments, showy melodrama, and (oops!) an affair - there are some quiet, serious moments, too. It’s the intersection between the two that makes this read both scintillating and thought-provoking.” (San Francisco Chronicle)

What listeners say about Woman No. 17

Woman No. 17 is a wonderfully weird tale about a babysitter gone bad in Hollywood Hills. Have any of you seen the 1970s noir Three Women with Shelley Duvall and Sissy Spacek? This book totally has those vibes — female friendships that morph into something strange and sinister. (There’s also an art school side story, which I loved.) Narrators Cassandra Campbell and Phoebe Strole immediately drew me into the story, which doesn’t always happen for me with audio fiction, so it was especially fun to be hooked from track 1.

four and a half

I would honestly give it more like four and a half stars but it's raw and beautiful and the story feels so uncut in the most perfect imperfect way. The book doesn't feel like it throws anything into the basket for the sheer factor or shock for those dumb enough not to see things coming like in other books. It's a story, yes. However, it feels like a real one. It's as if Lady stopped writing her other book and started writing this one instead.

This book is for a world of quasi-feminists, first year psyche students, and curious on-lookers to the mythical story of having a sub par mommy and parenting a disabled child. The novel was built on trite dialogue and first world angst - please avoid and join me in a cruelty free ear experience and choose another more capable author

Life Can Be Complicated...

An interesting story of souls that are loss due to their paths. To enjoin paths that were meant to be crossed for the outcome was destined in order for the rebirth of their lives took place.

I listened to this book non stop. I really enjoyed the reader's perception of lady.

I don't get the point of this Novel

Seriously, this was just a bunch of endless dialogue with no plot. I pondered this, tried to figure it out but no, I'm sure there was not a plot. It started out good but quickly fell flat and stayed that way.

Well written, good character development, but the story lacked substance and appeal. Most of the characters are just self absorbed idiots and it makes it difficult to sympathize and relate to them. It's essentially a story about selfish people making poor choices and barely having to deal with the consequences.