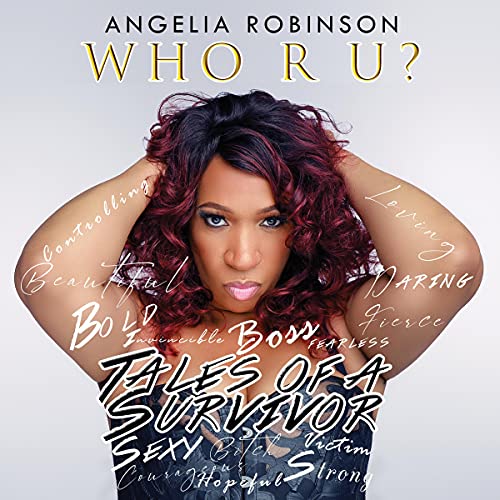 After being sexually assaulted at four, Angelia Robinson grew up with an identity crisis so acute that she didn't even know how to properly spell her name until she was 12. Her autobiography, Who R U?, describes a middle-class broken little girl from Maryland, who is transformed over the course of 48 years, and a fearless woman who would be used to help transform the world.

A devout belief in God helped her to realize she had a higher purpose to fulfill. But beyond being a wife and mother, Robinson couldn't envision what that destiny might be. She had always, throughout her life, been pushed into a position of standing out, of shining, of leadership, because people gravitated toward her. She understood that she was one of God's messengers (which is the literal meaning of her first name). She had also been a recording artist and a damned good one. Yet there she was at age 42, just coming out of an unhappy 16-year marriage, recently evicted from her home, living paycheck-to-paycheck working at a call center doing telemarketing, with a newborn - and miserable.

This wasn't how her story was supposed to go. It was time for her to turn around the narrative.

Bubbly and gregarious despite absorbing one punch after another from life, she took the advice of an old friend and started selling bedroom accessories and other enhancement products at in-home parties, like Tupperware but for couples. Within a few years, she became a superstar in direct sales, earning more money than she'd ever seen in her life and standing out as someone her fellow saleswomen looked up to. Suddenly, a woman who had numerous brushes with death and could never find her path and passion was a senior executive director and a professional everyone held up as an example of the right way to do things.

Angelia Robinson survived until the miracle happened. Now she lives her life in a state of bliss.

What listeners say about Who R U?

I would recommend this book for anyone afraid to face their past out of fear of what others will think. This book was very transparent and I was so in tune that I found myself up all night listening and even listened in the car. I know it had to be hard to reveal such truths about the people the closest to you and possibly face backlash. Thank You for Sharing and Letting the World get a glimpse of your Struggle but also your Triumphs!

STOP!! Y'all this book is FIRE 💣💯. Angelia Robinson is an amazing Author amongst other things! This book is so great that I could not put it down, This audio book is life! I'm listening while cleaning, cooking, showereing, or driving down the road. im on my 3rd read of this book and can I just say, I could read it a million times over again!! I JUST ABSOLUTELY LOVE IT!!

I absolutely loved this book. It will change your life and release you from some strong holds that may be holding you back. Phenomenal book by a Phenomenal Writer.

OMG! I read the hard cover book but the audio version with Angelia narrating it brought every single word, every page and every chapter to life for me. I felt her every moment as if I she was personally telling me the story. She brought the story to life and I could not stop listening! I cried, laughed, shouted for joy for her. I felt I got to know her in a very personal way. I empathized with her and even recognized myself at different points in the story. I believe that this book will help every adult woman that listens or reads it break invisible chains or at least bring awareness and/or begin their healing process.

Can relate on many things. Voice is very soothing and u can hear and feel the emotions as she speaks her story. Definitely one book ive enjoyed listening to that's brought out my emotions as well

I listen to this book to get motivated. the narrator is excellent and easy to follow.. The story is amazing! if you want to feel inspired. listen to this book. I have so many audiobooks, but this is my favorite! The book is fantastic, I highly recommend! I love it.!

This Book is Fire!

Loved this book, made me go thru all emotions, sometimes all at once. This book made me cry, pissed me off, & had me laughing. this book is a must read.