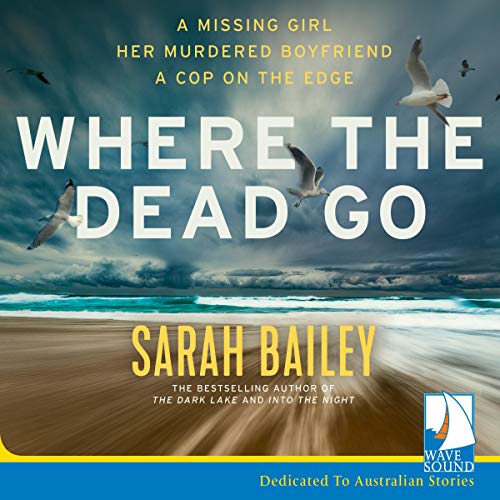 Where the Dead Go

By: Sarah Bailey
Narrated by: Raechyl French
Try for $0.00

A 15-year-old girl has gone missing in the middle of the night, and the following morning her boyfriend is found brutally murdered in his home. Was the girl responsible, or is she also a victim of a killer? But who would want two teenagers dead?

After personal tragedy finds police detective Gemma Woodstock in the coastal town of Fairhaven with her son in tow, she has begged to be part of a murder investigation rather than take the time to figure out how to handle the next stage of her life.

As she searches for answers while navigating her son's grief and the hostility of her new colleagues, the mystery deepens, and old tensions and secrets come to light. Gemma is increasingly haunted by a similar missing persons case she worked on not long before. A case that ended in tragedy and made her question her instincts as a cop.

Can she trust herself again?

What listeners say about Where the Dead Go

I loved this book which follows on from the last two books. The story was narrated really well. It was engaging with twists and turns. Enjoy!!

For me, the narrator ruined a great story. Her inflection was often at odds with the adjectives spoken. At times it was like listening to a first time teenage babysitter read a bedtime story to her charges.

My favourite of the series

A good read with lots of twists to keep you guessing. I’ve enjoyed the other books in this series but this one is my favourite. Intrigued from the start!

Where The Dead Go

I have really enjoyed the first two books in this series and was so looking forward to this, the third. Gemma Woodstock is a strong character and Sarah Bailey a great author.

In Where the Dead Go, I was made very aware how a narrator and the intonations used when reading can make a difference in portraying that character. I didn’t like Ms French as Gemma Woodstock, at all. Woodstock can be difficult and removed at best, Ms French had her sounding like a total bi*** all the time.
In comparison to listening to Kate Hosking, this narrator was less than adequate. Story good.

l am not sure at all about this book!

BUT I HATE WITH A PASSION THE LEADING WOMAN.

This completly overwhelming dislike of the main character makes me a poor judge l think.

Gemma whatever the hell her name is a dispicable self centered piece of crap - wow is me that your childhood in shitsville small town Australia - get over yourself, many if us loose our mum too young for her and any child, but please end this character now please

l have been unable to read it all but actullally skimmed across as that is all it required. Same old plot, small town back drop, get ir from your library a waste of money to buy it.