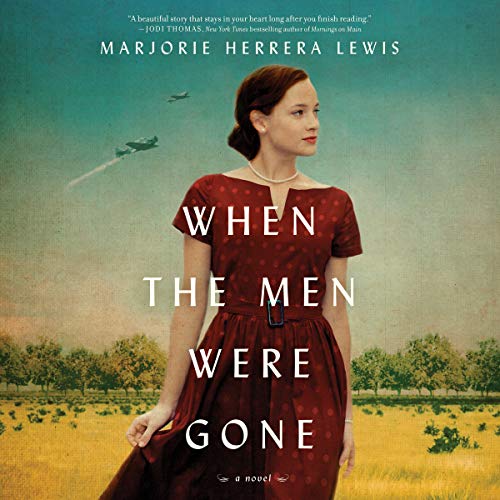 When the Men Were Gone

By: Marjorie Herrera Lewis
Narrated by: Eva Kaminsky
Try for $0.00

In Marjorie Herrera Lewis’s debut historical novel, the inspiring true story of high school teacher Tylene Wilson - a woman who surprises everyone as she breaks with tradition to become the first high school football coach in Texas - comes to life.

Football is the heartbeat of Brownwood, Texas. Every Friday night for as long as Assistant Principal Tylene Wilson can remember, the entire town has gathered in the stands, cheering on their boys. Each September brings with it the hope of a good season and a sense of unity and optimism.

Now, the war has changed everything. Most of the Brownwood men over 18 and under 45 are off fighting, and in a small town, the possibilities are limited. Could this mean a season without football?

But no one counted on Tylene, who learned the game at her daddy’s knee. She knows more about it than most men, so she does the unthinkable, convincing the school to let her take on the job of coach.

Faced with extreme opposition - by the press, the community, rival coaches, referees, and even the players themselves - Tylene remains resolute. And when her boys rally around her, she leads the team - and the town - to a Friday night and a subsequent season they will never forget.

Based on a true story, When the Men Were Gone is a powerful and vibrant novel of perseverance and personal courage.

"A wonderfully touching and beautiful story.... Tylene makes me laugh, cry, and cheer for her in ways I have not done in a long time.” (Diane Les Bocquets, best-selling author of Breaking Wild)

What listeners say about When the Men Were Gone

It made me laugh and cry. The main character was strong, courageous, and resilient.

Interesting perspective on war and football

I enjoyed listening to the lead character’s perspective on why she was making the choices she made. She lends credence to the idea that an individual can find greater meaning in their job. The negatives for me in this book were that all of the character sketches felt pretty superficial. She could have delved deep into about six different parts of the story and built out a major work of fiction, but she instead felt held back and never really went as deep into any of the BIG issues that she pulled into the book. Perfectly fine for a book of this one’s length, but I guess I prefer books even when in audio form that go deeper. The voice actor who read the book did a phenomenal job of portraying characters of different genders with a variety of regional dialects so kudos to her.

Not a football fan, but it didn’t matter.

I’m not a fan of football but this book had me rooting for the team. Good characters, feeling, conflict and community. Really enjoyed it.

My memories of high school football games and all the emotions they invoke are great. And I love underdog stories, especially when it comes to women and World War II.  So when I heard of "When the Men Were Gone," I knew it was something I want to read (hear), and in fact I bought it right away, then I allowed it to sit in my audio queue.

I shouldn't have done that and I'd like to save you from making that mistake, too. Because sportswriter Majorie Herrera Lewis's new little book is a gem and a real touchdown.

Based on a true story, the book drops you right into a bad situation for Tylene Wilson, a vice principal at the high school in Brownwood. Due to the war, the football team is in need of a coach and if she fails to find one Tylene knows her senior boys may be tempted to quit school and enlist.  While Tylene is as patriotic as any American, she knows that war is no place for a high school aged boy.

The fact is, football is something that Tylene has always shared with her father.  And not just the game itself, but the intricacies of it.  So it's a wonder that Tylene doesn't realize from the beginning that she could be the coach.  Of course, when her husband points that out to her, Tylene is the first to balk.  She's a woman!  She'd never be accepted as a coach on the field. And we all know what will happen if/when she dares step into those shoes.

What ensues is a great book, a great Texas football story, a great women/leadership story. So far this is the book this year I want to hand out to all my friends and say: read this. Also, Marjoie Herrera Lewis has such a deft touch with football she made me want to learn a little bit more about the intricacies of the game. (Ya'll please don't tell my husband that. Maybe I'll just memorize me some of Tylene's quotes and impress the socks off of him.)

So don't do what I did.  Go ahead and buy the book and read it, right now.  And enter the giveaway so that you can spread the wealth.

Thank you to the author and publisher for a copy of the book for an honest review. Yes, I read the copy between listening to my purchased copy because I needed to know what was going to happen more quickly than I could with a typical audible listen. Can't wait for this author's next book.

Narration takes the story to the next level

4.5 STARS. This fictionalized story of the very real Tylene Wilson was excellent, but the audio book narration by Eva Kaminsky was amazing. Kaminsky sounds natural, and perfectly captures the Texas accent with just the right flair and inflections to her words. She's a real storyteller, and her narration raises WHEN THE MEN WERE GONE to the next level -- which is hard to do because the story is pretty darn good.

What author Marjorie Lewis captures is the essence of small-town Texas -- not only during the book's setting during World War II, but in general, especially with the football is all and the women have their place mentality that persists. Lewis describes it all and brings it vividly to life, warts and all, and gives readers a lot to chew on beyond the main conflict that must be resolved: is Brownwood going to have to cancel its football season because all the men are gone?

There is so much to like in this story: the relationship between Tylene and her husband John; the fond reflections of a happy childhood; the sprinkling of historical facts that enrich the story. And the story, of course. This is much more than a story about saving a football season; it is about a woman saving the lives of a town's high school boys who would surely enlist if there was nothing to keep them home.

What's always humming in the background is the impact the war has had on the town and its people. Every time a plane flies overhead, it's the sound of death as yet another fallen soldier is coming home. There are some poignant pieces of writing that make the reader/listener stop and take a ragged breath and remember that there are no winners in war.

Not only was Tylene's story new to me, but I learned other bits of history. I hadn't realized that Camp Bowie housed thousands of American soldiers AND German POWs, for example. And references to other events and people beyond the war -- the Zephyr tornado, the Galveston Giant, and Ma Ferguson -- had me looking up information to refresh my memory. All these fine details gave authenticity and perfectly contextualized WHEN THE MEN WERE GONE.

My only complaint is with the ending. Yes, readers know how the main plot conflict was resolved: we know who wins the big game, etc., and this may be enough for some readers/listeners. But what about Tylene? Did she continue to coach the team? Did the town ever fully accept her as the coach -- or even thank her for what she did? Given the book was a fictionalized biography, I wish the author had shared the results of her research. An epilogue or author's note to tell us the facts of the rest of Tylene's story would have made this book perfect, but as I said before, it came pretty darn close to perfection.

I heard about this book from Lone Star Book Blog Tours, but I purchased the audio copy on my own, with no strings attached to write a review from anyone but myself. My review is my honest opinion -- the only kind I give.

Needed to read this book for a college history course final exam. Really good book. It's a little hard to catch on with all the background characters at first (at least for me) but it ended working altogether for a great story.

Great story. The only exception: in Texas we call them PECANS, (puh-kons) not (pee-cans). Lol

This story embodies the spirit of humanity in the face of adversity. Tylene Wilson was a trailblazer and warrior of the same ilk as Pat Summitt, and another Central Texas sports icon, Jody Conradt. Even if you don’t love “sportball” you will root for the Brownwood Lions when you read this story. Congratulations to Ms. Lewis on a fantastic debut novel!

Loved it! This was well written and I really enjoyed the entire book! I hope to see more from the author!