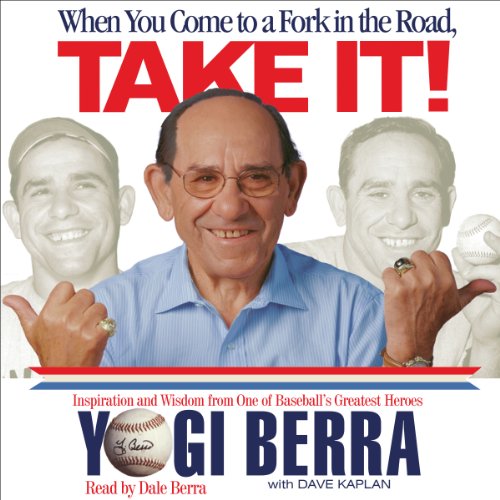 When You Come to a Fork in the Road, Take It!

By: Yogi Berra,Dave Kaplan
Narrated by: Dale Berra
Try for $0.00

Yogi Berra is one of America's most beloved baseball players of all time, known as much for his wit and humor as he is for his exploits with the New York Yankees. In this new book, Yogi provides inspiring, funny, and surprisingly moving essays on life, happiness, and getting through the slumps.

Each essay is centered around one of Yogi's unwittingly wise aphorisms - "it ain't over till it's over" - and illustrates how the rules of life and baseball are uncannily similar. From his early years as an immigrant's son who dropped out of the eighth grade, through his triumphant career as a player and manager who played in a record 75 World Series games, Yogi explains his recipe for fulfillment and happiness with life lessons that are profoundly simple, simply profound - and classic Yogi to the core.

"Much more than just deja vu all over again." (Amazon.com)

What listeners say about When You Come to a Fork in the Road, Take It!

Super fun to hang out with Yogi for a few hours

We all love Yogi's concise phraseology. This is a neat "memoir" highlighting some of our favorites. I grabbed this for entertainment during a LONG road trip with my elderly mother -- a die hard baseball fan. Good entertainment!

Yogi is more than ex baseball player. He is a modern day life Yogi. Well worth it.