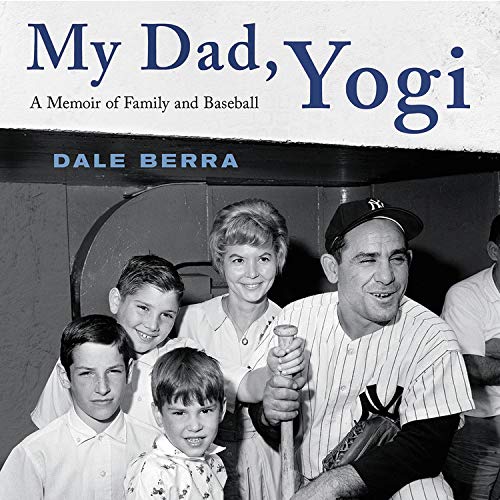 A candid and nostalgic father-son memoir by Dale Berra, providing a unique perspective on his legendary Hall of Fame dad, the inimitable and highly quotable Yogi Berra.

Everyone knows Yogi Berra, the American icon. He was the backbone of the New York Yankees through ten World Series Championships, managed the National League Champion New York Mets in 1973, and had an ingenious way with words that remains an indelible part of our lexicon. But no one knew him like his family did. My Dad, Yogi is Dale Berra's chronicle of his unshakeable bond with his father, as well as an intimate portrait of one of the great sports figures of the 20th century.

When Yogi wasn't playing or coaching, or otherwise in the public eye, he was home in the New Jersey suburbs, spending time with his beloved wife, Carmen, and his three boys, Larry, Tim, and Dale. Dale presents - as only a son could - his family's history, his parents' enduring relationship, and his dad's storied career. Throughout Dale's youth, he had a firsthand look at the Major Leagues, often by his dad's side during Yogi's years as a coach and manager. The Berras' lifelong family friends included Joe DiMaggio, Mickey Mantle, and Whitey Ford. It's no coincidence that all three Berra sons were inspired to play sports constantly, and that all three became professional athletes, following in their dad's footsteps.

Dale came up with the Pittsburgh Pirates, contributing to their 1979 championship season and emerging as one of baseball's most talented young players. After three strong seasons, Dale was traded to New York, briefly united with his dad in the Yankee dugout. But there was also an extraordinary challenge developing. Dale was implicated in a major cocaine scandal involving some of the biggest names in the sport, and his promising career was ultimately cut short by his drug problem. Yogi supported his son all along, eventually staging the intervention that would save Dale's life, and draw the entire family even closer. My Dad, Yogi is Dale's tribute to his dad - a treat for baseball fans, and a poignant story for fathers and sons everywhere.

"Baseball is a game that fathers teach their sons how to play. Life lessons are a lot tougher, for that's where they have to both learn from each other. Dale Berra's honest, humorous, and touching story is an intimate look at a relationship that was at times difficult, complicated, and tense, but true to who Yogi Berra was...always loving." (Billy Crystal)

"My Dad, Yogi is a beautifully depicted love story between father and son. Dale shares funny and unique reflections of what it was like growing up in the shadow of one of the most recognizable and beloved public figures of all time. I had such great respect for Yogi as a New York Yankee. I had tremendous adoration for Yogi as a man. Dale captures the essence of both in this book." (Joe Torre)

"Dale Berra's My Dad, Yogi lets us in on things we may not have known. But this endearing book also confirms what we always knew: Yogi Berra, the Hall of Famer, the American treasure, was a genuinely wonderful human being." (Bob Costas)

"Dale, who had a 10-year MLB stint, reports on his father from a singularly intimate perspective.... Dale Berra's memoir both illuminates baseball history and adds to Yogi's life story." (The Washington Post)

What listeners say about My Dad, Yogi

Well Worth Your Time

Dale Berra's book is really a dual story about the lives and baseball careers of both Yogi and Dale, I think it was wonderful. The book is concise and plainly written. It is chock-full of anecdotes and stories, all very much enjoyable. The book does forthrightly go into some detail of Dale's cocaine issues, but I believe that only adds depth and richness to the entire book.

I must say that I prejudged this book with lower expectations. But much to my surprise, the matter-of-fact approach to Dale's style was refreshing. The narration was good, not great--I only gave it 3 stars--but it certainly never detracted from the quality of the book itself.

I gave it my highest rating because it ticked all of my boxes, and most importantly, my box next to the phrase "I wish the book would not end." It joins just a few books that I have either read or listened to that belong at the top. Much like Yogi belongs at the top.