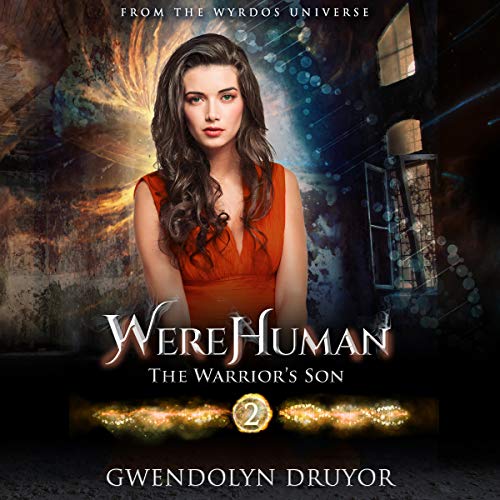 Family can be hell. So can torture. But nothing's worse than the hell you carry around in your own mind.

Genetic-manipulation survivor Jay Doe lives alone in the mountains. Abandoned shape-shifting dog Bayard lives surrounded by firefighters. They're both hiding from the Consortium. They're both about to be found. And the Consortium doesn't take prisoners; they take volunteers for the Biomedical Team to play with.

What listeners say about WereHuman 2 - The Warrior's Son

WereHuman 2: The Warrior's Son: A Wyrdos Universe Novel was a great read by Gwendolyn Druyor. Jay Doe is a genetic manipulation survivor who lives alone in the mountains. Bayard is an abandoned shapeshifting dog who lives around firefighters. They are both hiding from the Consortium. They must both trust each other if they want to survive. I enjoyed reading this book and cant wait to read more by the author.

I actually missed book 1 and picked up book 2 on audible. it took me a bit to figure out what was going on (my fault for skipping) and there's a bunch of time jumps but once you get into it, you can easily follow but what was more amazing is the heart that the author brought to these characters. I cried like a baby and just want everyone and everything to have their HEA but that's all how you look at things. Not everyone's HEA is the same and not always spelled out. I choke up just thinking about one character and that there is the sign of a GREAT author. One who sucks you into their world, makes you love factious characters and makes your heart break over and over. On to book 3 and then probably I'll go back and track down book 1.

Another great romp into the Wyrdos Universe

Second book in the WereHuman Series again it can stand largely alone. This time we follow Laylea’s brother Bayard surrendered at a fire station raised as a fire dog. Till he is found by the evil group that was hunting for their super soldiers and Laylea’s brothers and sisters in the last book. Here the story takes a dark turn for a while and we see the worlds within worlds that are largely hidden from each other. It leaves you wanting more by the end rooting for the heroes and booing the villians

I really enjoyed listening to this audiobook

I really enjoyed listening to this audiobook. This is the second book of the series and answered a lot of questions from the first book. There is a lot of suspense, humor and some sadness to this story. I can’t wait for the third book to come out.

Knocked it out of the park!

I love the background information we get in this book! So many questions from book 1 are answered. I do however have new questions that will have to wait for book 3, but that only makes it better. Tears were shed, giggles happened, and plenty of "awe" moments in this book!

I loved this book, it was an emotional rollercoaster, and action packed, with an intriguing plot that kept me captivated to the end and begging for more. Following the rebels fight against the corrupt consortium was nerve wracking, and getting to know Bay, Laylia's brother was so moving, it was hard not to fall in love with these characters. I'm still amazed at Gwendolyn's expressive narration and can't wait for her next book and to hear her lovely voice again.