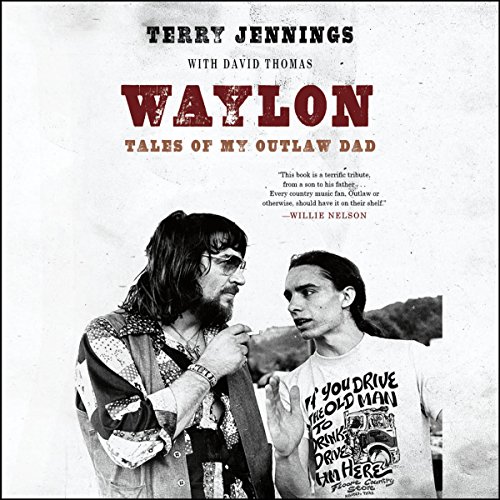 From the foreword by Ken Mansfield:

"There are many stories about Waylon...the family man, the creative genius man, the quiet man, the king-of-the-six-day-roar man, the uncommon man, the legendary man, the bad-ass man.... They are all in this book."

In a signed copy of his autobiography, Texas-born country "outlaw" icon Waylon Jennings penned a personal note to his son Terry: "I did my best. Now it's your turn." Two decades later, Terry Jennings finally completes the true story of his father's remarkable, unvarnished life with Waylon: Tales of My Outlaw Dad.

Born when Waylon was only 19, Terry came of age just as Waylon's career hit the stratosphere with hits like "I've Always Been Crazy" and "Good Hearted Woman", one of his famous Willie Nelson duets. Terry dropped out of high school and joined his dad on tour, and the two became more like brothers than father and son. On the road they toured with legends like Nelson, Johnny Cash, Kris Kristofferson, and Jessi Colter, Waylon's fourth and final wife. Together father and son led a hard-partying lifestyle centered around music, women, and drugs.

Waylon's success - critical acclaim, best-selling albums, sold-out tours, and even TV stardom on The Dukes of Hazzard - was at times eclipsed by his demons, three divorces, crippling debt, and a depression that Terry traces to the premature death of Buddy Holly. (Waylon was supposed to be on Holly and Ritchie Valens' doomed flight.) Through it all Terry worked on the touring crew, helped manage Waylon's career, and became one of his father's closest confidants. Debunking myths and sharing incredible never-before-told stories, this book is a son's loving and strikingly honest portrait of his father, "the greatest outlaw country musician to grace this earth" and an unlikely but devoted family man. Waylon: Tales of My Outlaw Dad will resonate for generations of fans.

"This book is a terrific tribute, from a son to his father." (Willie Nelson)
"I'm so excited about Terry's new book." (Dolly Parton)

What listeners say about Waylon

I have been a fan of Waylon Jennings since my parents took me to see "Nashville Rebel" when I was a child. I abandoned country music as an adolescent in the 1970s but returned to it when I watched Waylon perform at a show (probably the CMAs or something) at the peak of the Outlaw excitement with the album Wanted! The Outlaws. This book by Waylon's first born son, Terry, is a wonderful insider look at the legendary country singer. Terry stayed close with his father long after his parents divorced and even worked for years as part of Waylon's stage crew.

This book chronicles Waylon's beginning humble origins in West Texas to his start with Buddy Holly and his narrow avoidance of sharing Holly's tragic fate to the drug and sex filled debauchery of his glory days as one of country music's biggest acts. It's hard not to be simultaneously awed by the musician and horrified by his excesses which amazingly didn't kill him. It's very easy to imagine Waylon sharing the same kind of early demise that befell Elvis Presley--both consumed amphetamines and cocaine with voracious appetites. Waylon maybe just got a little lucky.

Still, if you are a fan of country music, this is a loving tribute by a son who shared many of his father's flaws but managed to survive to write this book and get his life straight. By the end, you mourn Jennings dying too soon from diabetes but also maybe you will gain appreciation for a man who should be given the same kind of accolades that Cash and Nelson receive.

Finally!!! We get a first hand account of The Man!

I have been obsessed w/ Waylons music for more than 25 years. True I was born the year Wanted! The Outlaws was released but the first voice that I ever heard sing was his...MAMAS DON'T LET YOUR BABIES GROW UP TO BE COWBOYS. My mamaw loved him and would turn up the beer and the radio nob when she heard his voice. She'd say," you know if anyone could give Elvis a run for his $...it's Waylon Jennings

This being a book about Waylon written by his son I was worried that it would be a soft and fluffy framing of a more complicated man. It was the exact opposite. It was sincere and honest and real. If you are a fan of music or history or the outlaw movement, this is the book to read. It's a very nice tribute to a father and great musician, but it's all left on the field.

An Interesting Look at An Icon

An interesting look at an American legend. A good biography on a life style few of us experience.

Great insight into the life and career of Waylon.

I could have lived without the religious propaganda. If you want to believe in fairytales, that's your business.

Great insight into the world of outlaw country music and the legend Waylon Jennings as told through the eays of his son Terry. Terry was as much a brother and friend to Waylon as a son due to their closeness in ages and the fact Terry toured with Waylon.

such a great story, and told in a way that only Terry Jennings could do!!!

Terry take on life with his dad was as insightful as listening to Waylon himself. 😥narration was great. buy jt

Really enjoyed hearing this book. Very interesting and a thoroughly great book. I so enjoyed the road trips

Wonderful tribute to an amazing man

Great book written by the son of Waylon Jennings. It was wonderful to hear all about the family and their stories. Waylon would have been proud.