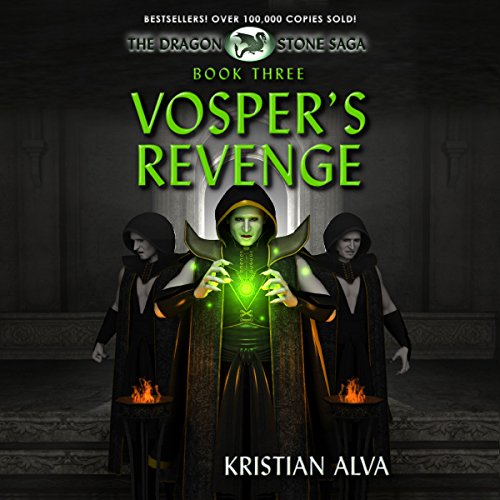 By: Kristian Alva
Narrated by: Adam Chase
Try for $0.00

Vosper's Revenge is the final book in Kristian Alva's popular Dragon Stones trilogy. As the races of Durn stand on the brink of war, the power-hungry emperor plans his conquest of the entire continent. The dragon riders are fragmented. They have been scattered across the land; weakened by the discovery of a traitor in their own ranks. Are the riders strong enough to defeat Vosper before he destroys them all?

What listeners say about Vosper's Revenge

Loved it. The performance was excellent. A must read. Can't wait to read next book in series.

Then the characters get dumb.

This series started out fair enough. A derivative to be sure, but enjoyable enough in its own right. The decline becomes sharp in this volume. Characters who should be wise make mistakes that are obvious in nature leading to deaths of enjoyable characters for no other apparent reason then "whelp we need a death to raise the tension." I have no problem with character death, but it should feel earned, not have me sitting there asking why experienced people are being so dumb. Then the book moves to a climax on a whim. Not building to it, just hey there are a bunch of us here, lets do this because it is an option.

The story continues as an easy read,

which is as a nice chang for me, and I'm going to continue to listen to the rest os the series. I bought this series when it was on sale, without using credits, and I recommend that others do the same, as its not bad, nor great, and the books are relatively short, especially for me, because I like books that are 20 or more hours long...more book for the credit. The narrator continues to be excellent; however, the doesnt have a vast amount of character voices, and there are more than a few characters that have the same voice. Still, he reads well, pausing in the right tome, for the right length of time, and is able to put emotion appropriate for the characters in appropriate time.

Second volume better than the first.

Intrigued with the first volume I was really hooked in this one. The story expands, characters are further developed and become more real to the reader. Most interestingly it was when you felt you knew where the story was going that you are surprised by a shift to a direction that excites and was not foreseen. Could hardly wait to read the next volume as I completed this one.

I am going to go all gushy on this book. I have already given Books 1 & 2 high ratings, but this book is even better. This is just one of those series that each book surpasses the previous one in writing skill, character depth, and plot intrigue.

First, the basics. Book 3 picks up where Book 2 left off. Vosper and his evil minions are poised to take the continent by storm as the forces of good (or at least the forces of the reasonable) are scattered and/or arguing with one another. Elias is still learning about his powers and his parentage. His bond with Nydiered (his dragon) grows each day. Without tossing out spoilers, there is death, there is intrigue, there is hope. This is one of those series that a young reader can grow with.

For many of the characters, we have had 2 previous books to get attached to them, or to learn to despise them. In Book 2 we had a traitor, and part of Book 3 shows us what our heroes have to do with that traitor – the tough choices they have to make (as they don’t inherently enjoy killing people and yet, how to trust this person ever again?). These interactions were some of the most moving, most intense in the book.

Then we have Elias and his father (Chua, who he learned about in Book 2). These were also touching moments, but more than that, they were sometimes downright hair raising. Elias’s dad has a wealth of knowledge, and not just from his time as a warrior, but also from his new hard won ability as a seer. He provides some background to Elias, and not just about Vosper but also about his mother, Ionela.

Tallin was probably my favorite character. Being taciturn by nature, he is a tough nut to crack. He is also a half-breed, not truly accepted by either race, and yet he has to deal with them all. We get to learn plenty more about him and just why he is a bit of a grump, and pretty distrustful of most folks.

I have one little quibble about a severely injured character. This character is then transported and it takes days. Yet no real treatment is given to this injured character during that time and this character survives the transport. So, I felt a few lines could have fixed this minor slip up in weaving reality into the fiction.

Now for Vosper. He does wreak havoc among our heroes. Also, his power continues to grow as he makes plans to go through with a final transformation that will leave him more powerful than he could ever be as a mere man. Of course our heroes hear of this plan and it both scares them and spurs them on to desperate heroic acts. It all comes to a head at the end and while I found one tiny element a little rushed (can’t say as it would be a spoiler to the ending of the trilogy), the ending was quite satisfying to me.

I did not want to say goodbye to these characters and this world. Luckily for me, there is a wholenother series in this same world with some of the same characters. You can expect me to be bringing you reviews on that series in 2015.

Narration: Adam Chase did a great job once again but I will say that I feel his narrating abilities have grown with this series. He had some powerful scenes to bring to life in this book and he did an amazing job. He also had some truly freaky, hair-raising voices to create with the numerous necromancers walking and and out of this book. I pictured him having to contort in order to make some of these characters come to life. His performance in this book puts him on my list of favorite narrators.