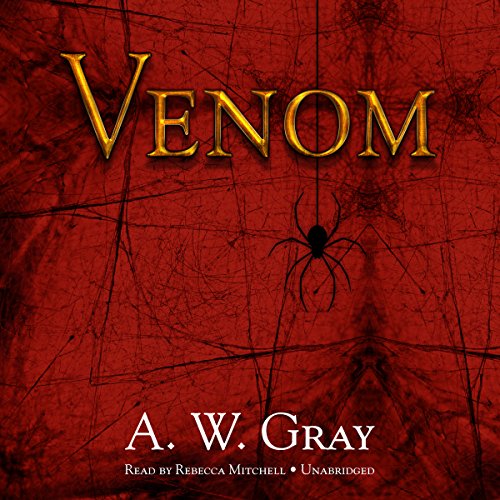 By: A. W. Gray
Narrated by: Rebecca Mitchell

Called the Fiddleback, he is an inhuman predator with a taste for human prey and an appetite for torture. Dallas cop Courtney Bedell is the only person who has ever seen this killer and lived to tell about it. Now, to save herself and those she loves, Courtney must match wits with a madman unlike any she’s ever known - and lure the Fiddleback into a web of her own design.

Venom is a tautly spun thrill ride that will keep listeners on the edge of their seats long into the night.

...a schizophrenic serial killer makes for a whale of a story. Well written and well read, this is a great police procedural.

Courtney Bedell is a talented cop and a single parent, having custody of her sister's (a crack addict) 4 year old son. She stumbles into the killer's abduction of a prominent Dallas socialite and barely survives the confrontation. This makes her the only living witness of the killer. She quickly finds herself in a tug of war between her own department's task force and the FBI.

Two things make her extraordinary, her saavy as a police detective and her love for her nephew. A.W. Gray's take on the FBI is now stereotypical. They are arogant media hounds bent on taking credit for the good work of others. No doubt he was influenced by his own experience with the Feds! Nevertheless it works great in this story.

Mr. Gray's works are as good as any of the great mystery writers. Do yourself a favor, give this a try!

9 of 10 people found this review helpful