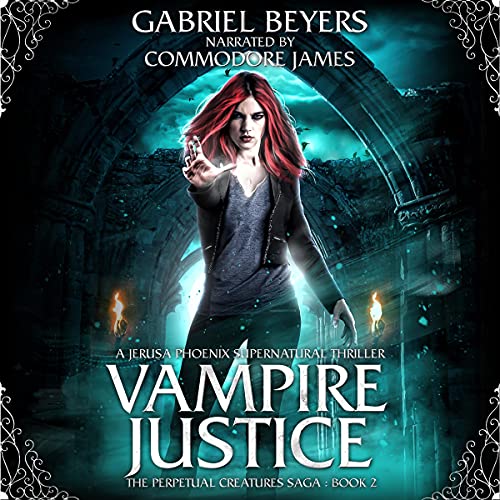 If she's spared execution, can a vampire with second sight save the ones she loves?

Jerusa Phoenix lives in fear of judgment. Unlike the harmless smirks she received back in school, a negative opinion from the Stewards of Life could get the newly-made vampire killed. With an army of savages on the rise and terrifying new creatures in pursuit, Jerusa wonders if approval for her immortality is actually the least of her worries...

Silvanus remains unsure of who he is. After saving Jerusa's life by turning her, his pursuit of the mysterious Divine Vampires is his only concern. Little does he know that his effort to keep the girl alive could make him a fugitive...

As Jerusa awaits the merciless council of blood-drinkers, she and Alicia keep their ghostly secrets hidden. But putting their cards on the table may be the only way to avoid a swift and lethal end...

Vampire Justice is the second book in The Perpetual Creatures Saga, a heart-pounding series of paranormal suspense novels. If you like different twists on vampire mythology, complex heroines, and refreshing world building, then you'll love Gabriel Beyers’ unputdownable tale.

Get Vampire Justice to quench your thirst for an intense page-turner today!

I actually started this series because of the Narrator Adam Gold and because the women read the females and the men read the males in the story. Then I became totally involved in the story. Pretty unique outlook on the vampire.

The second part of The Perpetual Creatures Saga takes us to a new level of mystery and intrigue...

Jerusa has been a vampire for six months now and it's time for her to see the Stewards of Life, for them to decide whether she will live or die. But before she gets to their fortress, her coven has to face other perils, too, ones they did not ecpect at all...
Silvanus follows his own path, his search for lost identity - he wants to know who he is and why he is what he is... Little does he know that the answers he gets will bring even mmore questions and put his life in danger...

The plot develops fast, turning in most unexpected moments, taking us in a completely different direction. There are new characters, some of them really evil, some twisted, some heroic... Most are dark, with hidden motifs and plots of their own.
There is a lot of action, too; these scenes are vividly described, almost cinematic in speed and imagery..

Generally, it's a very good continuation of Jerusa's adventures, making you want to read/listen on.

As for the narration, it maintains the high quality of part one, with great actors reading individual characters and the narrative parts being interpreted with a perfect balance between the emotional and the impartial. It truly is a very well interpreted radio drama:)