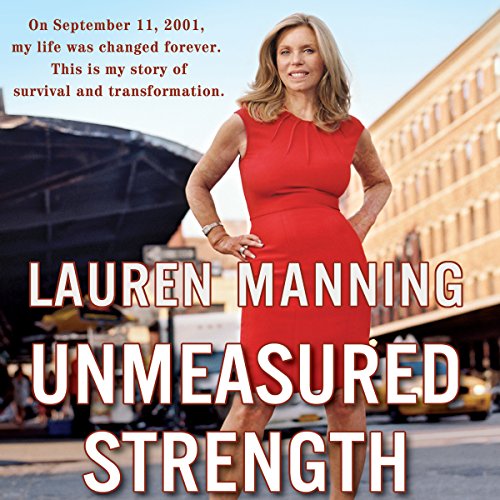 A survivor's awe-inspiring story of how she overcame tragedy and re-created herself as a wife, mother, and woman.

She had a big job on Wall Street, a loving husband, and an infant son, and a confidence born of intelligence and beauty. But on 9/11, good fortune was no match for catastrophe. When a wall of flame at the World Trade Center burned more than 80 percent of her body, Lauren Manning began a 10-year journey of survival and rebirth that tested her almost beyond human endurance.

Long before that infamous September day, Manning learned the importance of perseverance, relentless hard work, and a deep faith in oneself. So when the horrific moment of her near-death arrived, she possessed the strength and resilience to insist that she would not yield—not to the terrorists, not to the long odds, not to the bottomless pain and exhaustion. But as the difficult months and years went by, she came to understand that she had to do more than survive. She needed to undergo a complete transformation, one that would allow her to embrace her life and her loved ones in an entirely new way. Fleeing the burning tower, Manning promised herself that she would see her son's face again. Courageous and inspiring, Unmeasured Strength tells the riveting story of her heroic effort to make that miracle—and so many others—possible.

This book is read by the author who was a victim of the 9/11 attacks. It is an amazing story told by an amazing person. She worked at the WTC, and the morning of 9/11, she had just walked into the building when a fireball erupted from the elevator shaft and lit her on fire. She didn't know how to put the fire out. She made her way outside where there was a little patch of grass and started to roll. A man saw her and threw his jacket over her to smother the flames, then got help for her. She was burned over nearly 85% of her body and was not expected to live, so they more or less ignored her. Eventually she was taken to a burn unit and was put in a medically induced coma. She had a 10-month-old baby, and he is what kept her going once she regained consciousness and started the painful burn treatment protocol. Her husband stood by her, as well as her parents and many friends. She simply willed herself to live and recover, and she did it. I admire her so much. I wonder if I would be as valiant in a similar situation.

This was an excellent listen. She is amazing and incredible. I only wish that if I were in the same circumstance I could be as brave...but I doubt it.

This is a great story written extremely well. I love listening to books read by their authors. It adds something special and this was certainly the case.