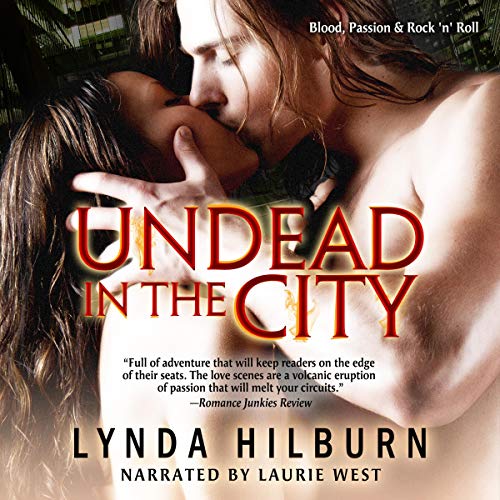 Undead in the City

By: Lynda Hilburn
Narrated by: Laurie West
Try for $0.00

Musician Tempest Moon knew the world was a rough place. Raised in the inner city of Detroit, the only way she learned to succeed was to be smarter - and tougher - than the next guy. Being a sexy, talented singer/lead guitar player with her own band was her way of staying in charge of her destiny. Whether anyone else liked it, or not.

Tempest's band was gigging in yet another downtown dive. The club was almost empty due to the arrival of the worst blizzard the city had seen in a century. With one more set to play before she and the band could escape the smoky lounge, a mystery man walked in. Even dripping wet from the relentless onslaught, Tempest could tell the man was unusual. If only because he was the most gorgeous male specimen she'd ever seen. But he was a little pale.

Malveaux had ducked into the bar to avoid having to kill anymore of the worthless minions set upon him by the local vampire territory boss. Under most circumstances, he'd have enjoyed tracking the idiots and tearing their hearts out. He'd learned long ago to take pleasure in his work.

But Malveaux wasn't dealing with usual circumstances. A sexual obsession, passed to him by his sire and suddenly overwhelming, had changed all the rules of the game. He knew if he didn't find an “offspring” - a  female thrall to serve his sexual needs - he'd go mad.

When he laid eyes on the charismatic musician on stage, he knew he'd found his “child". She wouldn't need to know he was an assassin. But she'd find out his deeper secret soon enough when he sank his fangs into the pulsing vein in her neck. Together, they'd take on the human underworld and the undead.

What listeners say about Undead in the City