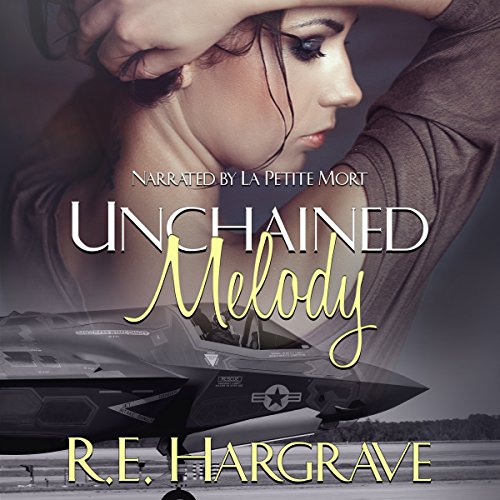 Marshall Chandler is a true American who grew up wanting nothing more than to serve his country to the best of his ability, by becoming a fighter pilot in the United States Air Force. On the eve of his first assignment, he meets the woman that will haunt his dreams and change his life.

What listeners say about Unchained Melody

What a great story! and the perfect narrator. I loved listening to this story while working or driving. It's well written and well narrated.
RE never disappoints me.

This is my first R.E. Hargrave book, but certainly will not be my last. I love military romance stories, and this one is definitely shows how love and fate work together. Marshall meets Melody the night before shipping off to Afghanistan. Little did he know how life changing this one night stand encounter would be. Years later, he finally gets the chance to reignite his relationship with her, and find how life changing it was for her as well. Lots of angst and hot scenes bring this story together.

La Petite More narrates this book. His narration gives the book warmth and emotion with the deep bass sound, you cannot help but be captivated by the story.

This is a stunningly beautiful, and engaging second chance romance.
Marshall just earned his wings and is excited to tame the wild blue yonder in his first assignment in Iraq. He is young and cocky and looking for the perfect one night stand to send him off on his first tour. What he didn't expect was Melody. She was gorgeous, funny, smart and sassy. She was easy to talk to, and as Unchained Melody played in the background, she became imprinted in his heart and mind. He ships out the next morning and for ten years he is haunted by the memory of the night he spent with her. Marshall, at his core, is a sweet, southern gentleman. He tries to deal with his regret of losing touch with her in daring feats in the air and women and booze on the ground. This short story is expertly told in flashback sequence. His spiral into the dark depths and his struggle to come out of it, all the while dreaming of Melody, keep us engaged and wondering if they will ever meet again. The narrator, La Petite Mort, did a wonderful job setting the scenes and conveying the emotions that Marshall endured. Even though this is a quick and short story, it has a depth that makes it totally satisfying. I definitely recommend this book.

That voice will melt an icicle!

What did you love best about Unchained Melody?

Loved the story. Though, let me tell you... the deep bass voice sends chills through me.

Marshall Chandler. He can talk to me anytime.

Marshall. That narrator knows how to make a lady swoon. Wow.

Passion with a flare!

Off the record... this story made me hot and bothered. Someone get a fan!

Yes it definitely was

Unchained Melody by R.E. Hargrave was a great quick read. Marshall and Melody's story is on that I believe many people can relate to. Marshall always thought Melody was the one woman who may have gotten away even though there was nothing he could do. It takes him a decade and many mistakes to make changes for the positive. I loved reading this story it was a great read. I can't wait to read more by R.E. Hargrave.

Unchained Melody is a novella of second chances. Marshall “Dallas” Chandler spends the eve before his first assignment, as a fighter pilot with the United States Air Force, with a woman that changes his life and haunts his dreams. A decade later will he get his second chance with this woman he hasn’t been able to forget or will tragedy strike?
This is my first experience with this author and the audio version of the story. Being that the book is a novella, this was a quick story to listen to and when it ended I wanted more. The author packs a lot of information in such a short story. I want to know more about Dallas and hope we will get more to his story. For the very quick hour it takes to listen to this book, it covers ten years of events in Chandler’s life, along with a few steamy sex scenes. There are also several surprises along the way making it surprising that it is a novella. I will be looking for more works by this author.
Audio books have become something that I’ve started venturing into recently, because of my added time in the car. Not only was the book really great, but the narrator does an excellent job in keeping the listener wanting to hear more. I found the narrator's interpretation of this story with his inflections and pauses were great at holding my attention. You can feel all the emotions that Dallas is experiencing during this story as the story is effortless read.
The narrator was able to keep my daily drive less stressful. I will be looking for other works this narrator has read. I am looking forward to finding more from this author and this narrator.

NO ONE CAN COMPARE TO HER

What made the experience of listening to Unchained Melody the most enjoyable?

The narrator did a great job of telling the story

What was one of the most memorable moments of Unchained Melody?

Yes I would. Because this story is beautiful and is about giving second chances.

When Marshall and Melody finally got back together again.

My favorite character is Marshall

Yes it made my heart stopped when Marshall got into the wreck. Yes it made me cry and laugh alittle.

Beautiful!! This is an quick and easy read. I had the audio version. This is an amazing, beautiful story between Marshall and Melody. After one night together. Faith had finally bought them together for the rest of their life. R.E. Hargrave did a wonderful job with the characters. I can't wait until I can read another one from R. E. Hargrave. Keep up the beautiful work! Definitely a must have in your collection.

A short and sweet story.The story jumped back and forward in time,mad it a little harder to keep track.A few surprices and a happy ending :)

This is a second chance novella. Marshall and Melody share an instant attraction and after years separated, they got their happy ending. The narration was well done. La Petite Mort has a great and sexy voice.

Dont be fooled by the length!

I loved this book! It was a short intense story that actually surprised me with its content. It was well written and lost nothing with its shortness, infact the hugeness of the story made it feel like a longer book, R E Hargrave wrote a blinder!
La Petite Mort narrated it brilliantly.

this is a wonderful romance which takes place over 10 years. but don't be fooled it is gritty and realistic in some of the subject matter.
great story and good narration.


This is sweet second chance romance. The story is set over a span of 10 years, starting with Marshall Candler’s one night stand with Melody. He is starting his career in the USAF and deploys overseas the next day, she has plans to become a Doctor and they never bothered to exchange contact info. Never the less, he could not get Melody out of his head and every woman he met there after was compared to her, none ever compared to her. Unhappy and with life spiraling out of control he is deployed back home to Texas. He then finds his Melody once again. Once again R.E Hargrave adds a nice twist to the story. Thanks for another great story!

I listened to the Audible edition narrated by the talented La Petite Mort. He brings a lot to the story, sets the perfect tone and adds the right amount of dramatic flair. He has a wonderful voice and is a great performer! Thank you for another great listen!!

A very quick second chance novella. A soldier who can't forget a girl he spent only one steamy night with. After years of longing and what ifs they meet again....

La Petite Mort is a good narrator with an astonishing voice but this time I didn't quite like the pace of the narration. It felt a bit rushed, at least for my taste.

Such a great sweet storyline. I loved this book. It has all the feels you need. It just goes to show you don’t have to have a book 10hrs long, as long as it has chemistry! Great performance.