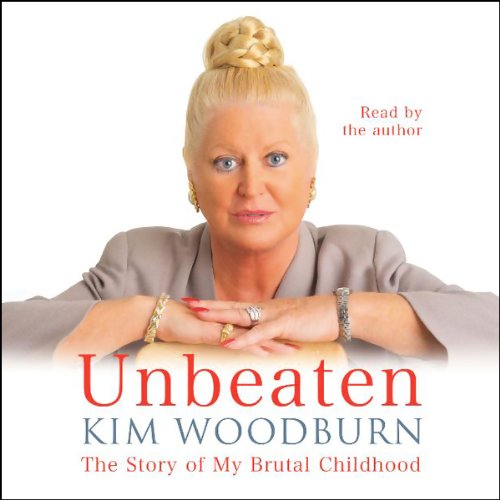 For Kim Woodburn finding fame in her 60s in the smash hit television series How Clean is Your House? with fellow dust-buster Aggie Mackenzie is like living a fairy tale. Often she has simply wished that she had never been born, for Kim has overcome horrific emotional and physical abuse both at the hands of her alcoholic mother and her philandering, sexually abusive father. In her brave and revealing story Kim's memories of growing up are not of love and cuddles, but of beatings and random cruelty.

Shuttled between the brutal houses of her warring parents, a succession of miserable children's homes and a grim convent - Kim's past has cast a long shadow over her life.

But just before her 16th birthday she finally made her escape. It has taken decades of hard work, and a wonderfully happy marriage to conquer depression but now she has emerged unbowed and unbeaten as Britain's Queen of Clean.

What listeners say about Unbeaten

I found this audiobook very easy to listen to and certainly inspiring... Definitely worth the time and money.

Kim's difficult life and positive attitude serves as an inspiration to all. I would be happy to recommend this title to anyone. Kim reading this book to us made it all the better.

I loved Kim's tale about her life. it showed me life you are not always in charge of what happened to you. But Kim didn't sit back and cry over her neglect and abuse that was done to her, instead she got up dusted off the dirt life gave her, and she made an amazing life for herself.

This book was short enough to be read comfortably in one weekend. Kim reads it in the manner you would expect, to the point with no nonsense, and I think that enhances the mood of the story. She doesn't use flowery or high brow words, she doesn't try to be something she isn't. It's tragic and it's inspirational. Most people would have crumbled at a fraction of Kim's nightmares yet she troops on into adulthood with amazing stoicism. It's not cheerful but it should have you feeling that the human spirit is stronger than you think.

Kim had a very hard and difficult life but her in strength saw her through , she never gave up after everything she has been through.

I admire her so much

I really enjoyed this, just wish it was a little longer as I could listen to Kim talking for hrs.

Kim Woodburns life story is very interesting she gave me hope and made me realise that I have so much to be thank full for .

A really emotional story. I can really relate. I say good on Kim Woodburn. She's a legend.

I already own the print version but it’s taken me ages to read it so I thought why not get the audio version. It is a really good story, butI was quite disappointed that it only lasted a few hours, I was expecting it to last longer.

What an amazing woman, a true inspiration. Brilliant, and she deserves so much. Ta book is always better when narrated by the author.

Love a bit of Kim Woodburn

As a fan I knew I was going to enjoy this it was a given. But if you are not ...if you listen maybe you will appreciate the strong formidable women that stands today

Kim's life was clearly one of exceptional tragedy, loss and maltreatment. The abuse she suffered, no one should have to go through and the most difficult part I felt was when she had spoken about giving birth to her baby alone in her home and her baby dying, and the aftermath of this for her.

No parent should have to go through this, but that kind of difficulty is beyond belief. Her tone throughout while she speaks the words that are ever so important in her history yet words she may never want to utter again, is incredibly strong and clear. She has evidently learned throughout her life how and when to regulate her emotions even considering the life she's had and how she could have turned out from these ordeals.

I wish the book would have been longer, as I enjoyed listening to the story and her and this is why I have given the overall score 4 stars instead of 5 as I would want more personally.