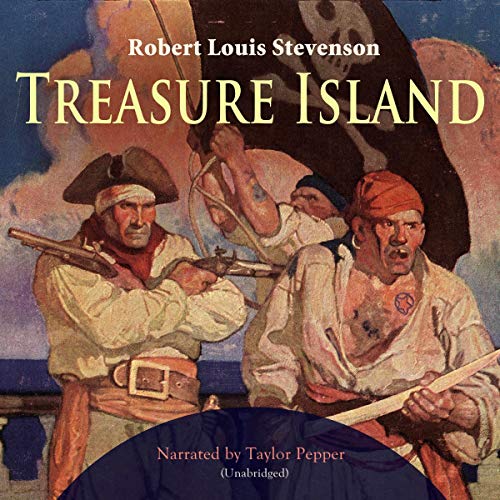 By: Robert Louis Stevenson
Narrated by: Taylor Pepper
Try for $0.00

"Treasure Island" (1883) by Robert Louis Stevenson is an adventure novel, narrating a tale of "buccaneers and buried gold". It was originally published as a serial in the children's magazine Young Folks between 1881 through 1882 under the title Treasure Island, or the mutiny of the Hispaniola, credited to the pseudonym "Captain George North".

"Treasure Island" is traditionally considered a coming-of-age story, and is noted for its atmosphere, characters, action and buccaneers. It is also noted as a wry commentary on the ambiguity of morality unusual for children's literature. It is one of the most frequently dramatized of all novels. Its influence is enormous on popular perceptions of pirates, including such elements as treasure maps marked with an "X", schooners, the Black Spot, tropical islands, and one-legged seamen bearing parrots on their shoulders.

What listeners say about Treasure Island

I love Treasure Island and got the audio version for my grandsons and I to listen to. This version just left me flat. My grandsons 9 and 11 lost interest only listened on and off. I was very disappointed.

I know this is a classic but had to stop listening to the book because the narration was horrible. Switched to Tom Sawyer which had an excellent narration. We could not believe that anyone would have published this narrator. Don;e waste your money

I really tried to like this but I just can't stand listening to Taylor Piper do the Narration. Sorry... I just can't