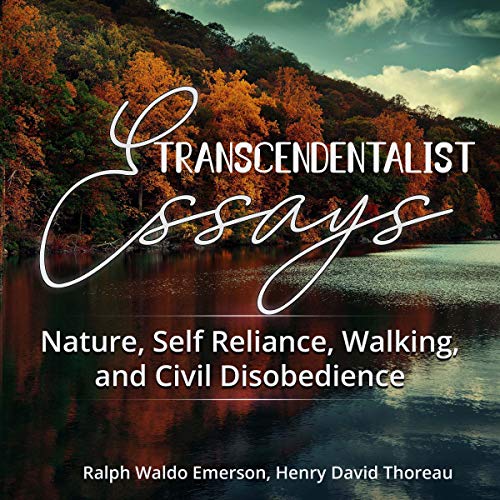 In Nature, Emerson put forth the foundation of transcendentalism, a belief system that espouses a non-traditional appreciation of nature. Transcendentalism suggests that the divine, or God, suffuses nature, and suggests that reality can be understood by studying nature.

Self Reliance contains the most thorough statement of one of Emerson's recurrent themes: the need for each individual to avoid conformity and false consistency, and follow their own instincts and ideas.

Walking is a Transcendental essay in which Thoreau talks about the importance of nature to mankind, and how people cannot survive without nature, physically, mentally, and spiritually, yet we seem to be spending more and more time entrenched by society. For Thoreau walking is a self-reflective spiritual act that occurs only when you are away from society, that allows you to learn about who you are, and find other aspects of yourself that have been chipped away by society. "Walking" is an important canon in the transcendental movement that would lay the foundation for his best known work, Walden. It has become one of the most important essays in the Transcendentalist movement.

In Civil Disobedience, Thoreau argues that individuals should not permit governments to overrule or atrophy their consciences, and that they have a duty to avoid allowing such acquiescence to enable the government to make them the agents of injustice. Thoreau was motivated in part by his disgust with slavery and the Mexican-American War.

What listeners say about Transcendentalist Essays: Nature, Self Reliance, Walking, and Civil Disobedience

The chapters on Idealism and spirit are missing. Am I missing something? Or was it excluded for a reason?

I have always enjoyed works by Emerson and Thoreau. This particular collection is about nature and man's connection (or lack thereof) to it. Since most are familiar with these two authors I will comment on the narration. Christopher Preece did a lovely job narrating these works. He read at a nice pace and with a clear voice. The only complaint I have is that there were times where it sounded like he was a bit too close to his microphone but it didn't detract from the overall narration. If you enjoy listening to classic writings then you'll enjoy this collection.

Timeless Essays by Thoreau and Emerson

These essays couldn't be more relavent in this day and age. I see that many people have completely lost touch with nature and we can't survive as humans without it. It makes me think of the saying 'if a tree falls in a forest...'. I have an old, old copy of Ralph Waldo Emerson's Self reliance and Other Essays but I loved hearing the spoken word. And Thoreau's work was equally as priceless. This was an excellent listen.

Christopher Preece's narration fit the audiobook very well. He spoke with sincerity and was easy to understand. This was an excellent book for anyone who wants to listen rather than read.