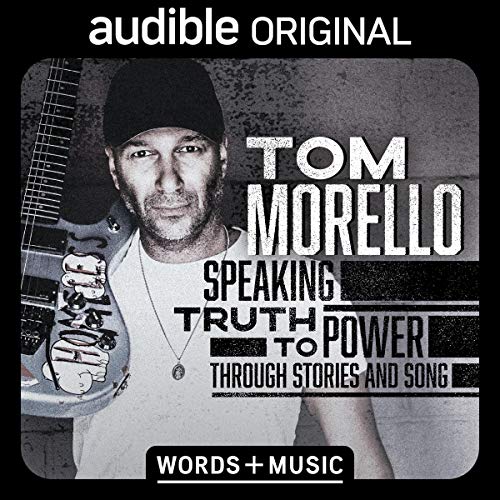 Go Behind the Scenes of Tom Morello at Minetta Lane Theater

Incendiary rock guitarist and acoustic troubadour Tom Morello, known for his innovative guitar solos and thunderous chords, is a groundbreaking artist whether in his solo career or as an original member of the rock bands Rage Against the Machine and Audioslave, two acts responsible for multiple Grammy Awards and a combined 30 million albums sold worldwide. He’s released four solo albums as The Nightwatchman, created the genre obliterating Atlas Underground project, and formed the band Street Sweeper Social Club with Boots Riley of The Coup. Morello has also been recognized by Rolling Stone magazine as one of the "100 Greatest Guitar Players of All-Time (#26)." Morello has produced or collaborated with artists of diverse genres including Wu Tang Clan, Johnny Cash, Tool, John Fogerty, Anti-Flag, Public Enemy, Joe Strummer, Crystal Method, Calle 13, Dave Mathews Band, Johnny Cash, Killer Mike. Travis Barker, and Pete Seeger. In addition, he joined Bruce Springsteen and the E-Street Band for six years on tour and is featured lead guitarist on Springsteen’s Wrecking Ball and High Hopes albums. In 2016, Morello joined forces with fellow Rage Against The Machine bandmates Tim Commerford and Brad Wilk, as well as Cypress Hill’s B-Real and Public Enemy’s Chuck D and DJ Lord to form the band Prophets of Rage. In 2020 Rage Against The Machine announced its reformation and an extensive world tour. Morello is also known for his lifelong valiant activism.

T Bone Burnett has earned an unparalleled reputation as a first-rate innovative artist, songwriter, producer, performer, film and concert producer, record company owner, and artists’ advocate. Born in St. Louis, Missouri, Burnett grew up in Fort Worth, Texas where he first began writing songs and making records. Burnett was traveling the country as a freelance record producer when he was asked by Bob Dylan to play guitar in his band on the now-legendary Rolling Thunder Revue tour, leading Burnett to form the Alpha Band with David Mansfield and Steven Soles. Burnett made three acclaimed albums with the group before making a string of solo records in the 1980s, at the end of which he began to work in film, beginning with Roy Orbison’s A Black and White Night.
Burnett is an Academy Award winner, a Golden Globe winner, and thirteen-time Grammy Award winner. He’s worked and collaborated with musicians across many genres including Elton John, Robert Plant, Alison Krauss, B.B. King, Tony Bennett, k.d. lang, Elvis Costello, Rosanne Cash, Sam Shepard, The Civil Wars, Taylor Swift, Ryan Bingham, Steve Earle, Leon Russell, and Sara Bareilles. Burnett’s first major foray into film was his collaboration with the Coen Brothers on The Big Lebowski, and he has since held multiple titles for numerous films. He also has multiple credits in television, including as the executive music producer and composer for the HBO series, True Detective, and the initial season of the ABC television series, Nashville. Burnett was nominated for a 2017 Emmy Award for his work with Jack White and Robert Redford on American Epic, a multi-part, multimedia project based upon the earliest recordings of roots music in the United States and their impact around the world.

Featured Article: Turn Up the Volume—These Are the Best Listens for Music Fans


There’s nothing quite like the electricity that flows through the crowd at a concert: from the moment the lights come up on stage to the amazing sense of communal energy, it’s an experience unlike any other. So it's been a painful few months for fans, musicians, and venues as the pandemic upended album releases, festivals, concert tours, and other events. These listens offer a much-needed dose of the rhythm, artistry, and melodies you might be missing.

What listeners say about Tom Morello at Minetta Lane Theatre

From casual fan to wanting to consume more Tom M.

I have always been a casual fan of Tom Morello and his work done with rage against the machine. I didn't know much of his life or all of the other music projects he's been involved in but this hour and 45 minutes made me feel as if I was in the room with him that night and I gained a lot more knowledge of who the man Tom Morello is. It was a lot of fun to listen to and learn more about Tom, what a great guitar player, smart guy, and overall good human being. Truly a fantasic storyteller who put together an autobiography that was awesome to experience. I only want to learn and hear more of his work and he also made me want to do more with my life when it comes to contributing to social change in America. Morello truly is inspirational and motivational. He leads by example when it comes to Social justice, so thank you Tom. This audiobook was super original to me as i have listened to hundreds of books but never one done in this fashion where music was part of and helped to tell the story. i hope to find more interesting content like this. A must listen.

I don’t know how I missed RATM (stuck in “classic” rock mode too long, I suppose) but I am definitely now a fan of Tom Morello. He’s smart, witty, eloquent and I love that he’s not afraid to stand up to injustice or stupidity in TPTB. Adding Rage to my Pandora feed. Let’s see where it takes me.

I opened this audible recording at the exact moment I needed to hear Tom Morello’s music and message! It was an unexpected gift that happened on the right day. I laughed, deeply thought and rocked out to his music! It sure helped having a great pair of Beats Headsets, too. Tom, Thank You!

Tom Morello is a gift

Informative, inspirational, and entertaining. A master of his craft, he simply is not capable of disappointing.

At first I thought I was going to skip the music hell I have made a zillion playlist with his riffs, but once I sat and listened I was bobbing my head. A good one man show

A good listen and a great story

Tom is a gifted story teller and a powerful voice for social justice. An intimate retrospective of an amazing life with highlights performed from Tom’s musical journey. A thoroughly satisfying and enjoyable experience.

Rock, EDM and A Voice for Freedom and Justice.

“Feels like we’re living in Pompeii and the only Boat out is The Titanic!” Says Morello in this combination of Story and Music from the Minetta Lane Series, but our response must be to live life, play loud Rock and Roll and lift up the Voices of those who don’t have them! Fight the Power! It was an amazing night to hear.

Too, I was amazed by the diversity of his career, the people he’s played with and the places he’s played. From The NOLA Ninth Ward to Skid Row and Sing Sing Prison. From Johnny Cash to Heavy D, Springsteen and Paul McCartney. And from Rage against The Machine to Audioslave and Nightwatchman, his guitar and his voice are incredibly powerful.

His rendition of Ghost of Tom Joad should be his Anthem for His Truth is Marching On! Five Stars!

Very well done one man show. We learn about Tom the person, activist, and musician. I am not familiar with all his music, and I still found it enjoyable. I think this would be a good listen for anyone who enjoys one man shows.

pretty cool story about how life is what you make of it. If you want to do it hard work it the way.

Something everyone needs to hear

From a small theater in New York, Tom's performance inspired this revolutionary that was sitting on a dock in Seattle. An inspiring message of freedom and potential that each of us have within us. "The world isn't going to change itself, that's up to you."