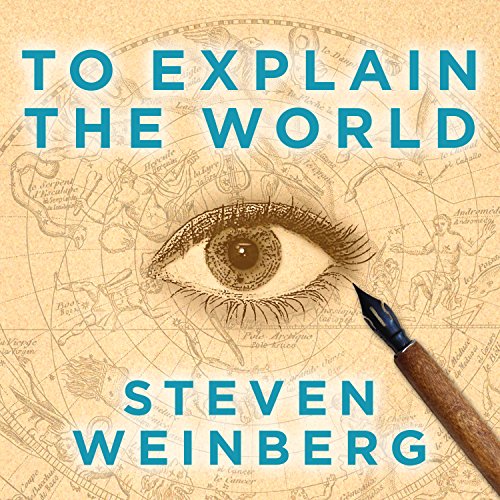 To Explain the World

By: Steven Weinberg
Narrated by: Tom Perkins
Try for $0.00

In this rich, irreverent, and compelling history, Nobel Prize-winning physicist Steven Weinberg takes us across centuries, from ancient Miletus to medieval Baghdad and Oxford, from Plato's Academy and the Museum of Alexandria to the cathedral school of Chartres and the Royal Society of London. He shows that the scientists of ancient and medieval times not only did not understand what we understand about the world--they did not understand what there is to understand or how to understand it. Yet over the centuries, through the struggle to solve such mysteries as the curious backward movement of the planets and the rise and fall of the tides, the modern discipline of science eventually emerged. Weinberg examines the historic clashes and collaborations that happened along the way between science and the competing spheres of religion, technology, poetry, mathematics, and philosophy.

An illuminating exploration of the way we consider and analyze the world around us, To Explain the World is a sweeping, ambitious account of how difficult it was to discover the goals and methods of modern science and the impact this discovery had on human knowledge and development.

What listeners say about To Explain the World

How the world created a Newton

The book listens like a series of lectures given to undergraduates (or maybe even graduates) in the liberal arts who want to understand how science developed and how we finally got to Newton. Newton changes everything, and the author will explain why the greatest book ever about the physical world is Newton's Principia ("Principles of Natural Philosophy"). The author outlines the steps that it took for the world to create a Newton. But just like in a college course you have to learn a lot of difficult things (which you'll quickly forget after the class) in order to understand the big picture.

In the process of getting there the author will describe in detail the theories of the early thinkers. To get to that understanding the author steps the listener through the Early Greeks, the Hellenic Period, the great Islamic thinkers (and they were great!), and through Thomas Aquinas, and to the start of Modern Science.

I now know in excruciatingly detail the wrong theories from the history of bad science such as the Ptolemaic system, the Aristotelian theory of motion, and Galileo's erroneous theory of tides. That's sort of a problem with this book. It's hard enough to keep today's less false theories about the world straight than it is to try to learn the fine points about the previously more false theories from the past.

The biggest crack in the armor of superstitious thinking and absolute knowledge comes with Thomas Aquinas. He takes the theology of his time and uses the logical principles of Aristotle to support his faith. At first the Pope forbids that approach but then the next Pope commends the approach. Allowing the logic and the reason that Aristotle represents (but not quite allowing for empiricism), allows the West to create a Newton.

The real theme of the book is along these lines: Plato is silly with his complete reliance on absolute knowledge; Aristotle puts science on the right path by categorizing the real world, but mars it with his final causes; Bacon's empiricism is still not relevant since he is striving for absolute knowledge by divorcing the individual from the world; Descartes's methods of thought leads no where, but his science (and math) are quite impressive; Galileo makes incredible strides but still doesn't realize the universe is not made up of mathematics, math is just a tool for understanding. Newton takes Kepler's empirically derived laws, idealizes them and derives them from first principles and shows how they can explain as well as describe.

Science needs to be understood as studying the particular, contingent and probable, and it never proves anything it just makes statements less false and this book helps one understand how we finally got to this point and out of Plato's Cave.

Very informative but a bit dull

I wanted to like this book. I have an interest in science, and it's also clear that Steven Weinberg really knows his stuff. I expected that this book would be similar to Carl Sagan's "Cosmos". But, unlike "Cosmos", I found "To Explain the World" to be overly long and tedious.

This book had a "cast of thousands" approach to the history of science. For example, Weinberg mentioned many different Greek thinkers, most of whom are not exactly household names. It became hard to keep track of who did what.

Also, Weinberg spent a great deal of time talking about various different theories of the solar system, and how those theories evolved over time. I understand that this subject was very much relevant to the topic of the book, but I still found the details to be tiresome. I suspect that I might have felt different if I read the book in print, rather than listening to it in the car, while driving.

I can definitely say, though, that if you are someone who has a strong interest in the history of science, this book would be right up your alley.

Good, though audio is not the perfect format

This book is a wonderfully interesting examination of the history of science and the scientific thought process. I learned a great deal, especially about the Greek traditions. Unfortunately, as an audiobook, it is hamstrung in many places because the text book clearly includes many tables and formulas used to illustrate Weinberg's points. These are dutifully narrated, but I can't really absorb the meaning of a formula by simply hearing it. Nevertheless, if you're like me and tend to listen to books more than read them, this is still worth your time. The overall point of the book and the conclusions drawn don't depend on specific formulas.

The narration leaves a little to be desired. The narrator's voice is not off-putting, but he often places the emphasis on the wrong word, making it slightly more awkward than it needs to be.

it's the book Cosmos producers should have made. it was like a companion book to the series.


This book is worthy of your time and attention. There was of course a "scientific revolution" and evidence of this is our technological society. Man is not just a toolmaking creature, he is a creature that utilizes science and the modern scientific method as a means to understand and to change the world. But this was not always so, which is part of what makes this book significant. However, at the end of the 20th century a fundamental discovery must've had a profound effect on our societies great minds and scientific institutions. And our comfortable doctors of science will be hard pressed to explain that world.

Dr Weinburg is calm and patient and fair with the great natural philosophers of the past but he also critical and tells it like it is when they are not consistent or failed to do their homework. Now consider the present day, how do the great minds and great institutions see themselves in light of the discovery of the universe, the "96%" which they failed to notice? The acceleration of the expansion which they failed to predict? Now how do they explain the world?

Have you listened to any of Tom Perkins’s other performances before? How does this one compare?

Tom Perkins gives me the feeling I am in the presence of Dr Weinburg.

Even when Columbus stumbled into the "new world" he did not ever realize the impact of discovery. Nor did the society of the time. Not right away. But at the end of the 20th century a few men broke through a wall to the other side, and gave all the comfortable institutions and the great men with their titles and credentials something to think about. If we were this far off the mark with the expansion and composition of the universe, what else have we missed? Why are we so limited in our ability to anticipate or provide an explanation for the acceleration of the expansion of the universe? Explain the world indeed.

What a great time to read this book with this author. If modern theoretical physics is " the Emperor" then the emperor has no clothes and must feel very naked. I feel privileged to have witnessed it. Now let's consider how biology feels about a man who wrote a program creating a new form of living cell. That's not just discovering something that already existed, that's creation of something new. That's a new world to explain.

A Slightly Longer History of Nearly Everything.

This crisp and challenging tour of the Who and How of our journey to and through the Scientific Revolution is a wonderful listen. Steven Weinberg gives fans of Bill Bryson's Short History a deeper dive into the papers and theories that led to the scientific method. Although the equations and tables require a relistening - he does not shy away from assuming the literate lay person can follow along well enough to grasp the essentials of each scientists process. A worthy book with a great reader.

Audio is nice, but no Technical Notes

This is an excellent history of physics and astronomy from Thales through Newton with a final chapter summarizing everything since. It is peppered with Steven Weinberg's comments and opinions (e.g., the contributions of Francis Bacon and Descartes are overrated). The Technical Notes are an important part of the book which the audio cannot include, so you still need a text version.

Even though most equations are relegated to the Technical Notes, the text includes a few, which the reader botches.

"Suppose we know the distance D ( t ) traveled in any time t."

How could Aristotle be so stupid?

very good retelling of the history of science especially early on and including how Middle Eastern scientists were involved in the advancement of science.