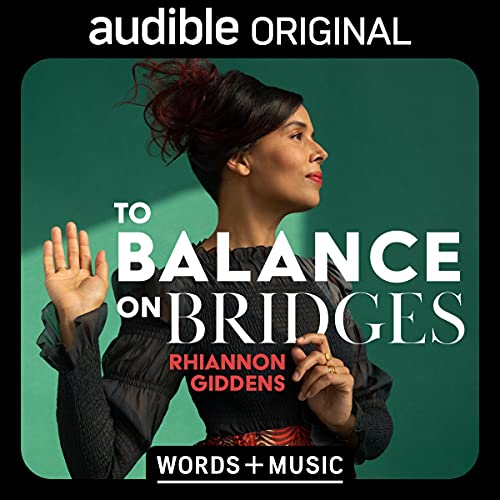 To Balance on Bridges

Rhiannon Giddens possesses the power to express herself and the human experience like few others. Journey with the inimitable folk musician and MacArthur "Genius Grant" recipient as the celebrated artist examines the multitude of influences and identities that have led her to a life "nestled in the nexus” - defined and further made whole by the sum of her parts.

Blending songs and stories from shared and personal histories, To Balance on Bridges finds Giddens in continued pursuit of truth in all its raw and underexposed forms. Performing tracks from several of her acclaimed albums, Giddens leads listeners through a multitude of musical styles, lyrical patterns, and instrumentation confronting questions on race, culture, appropriation, and class with searing precision. Hear an indelible artist reflect vividly on her own path as she, in turn, sheds light on our deeply connected journey ahead.

The acclaimed musician Rhiannon Giddens uses her art to excavate the past and reveal bold truths about our present. A MacArthur "Genius Grant" recipient, Giddens co-founded the Grammy Award-winning Carolina Chocolate Drops, and has been nominated for six additional Grammys for her work as a soloist and collaborator. She was most recently nominated for her collaboration with multi-instrumentalist Francesco Turrisi, there is no Other (2019). Giddens’s latest album, They’re Calling Me Home, is a twelve-track album, recorded with Turrisi in Ireland during the recent lockdown; it speaks of the longing for the comfort of home as well as the metaphorical "call home" of death, which has been a tragic reality for so many during the COVID-19 crisis.
Giddens’s lifelong mission is to lift up people whose contributions to American musical history have previously been erased, and to work toward a more accurate understanding of the country’s musical origins. Among her many diverse career highlights, Giddens has performed for the Obamas at the White House, received an inaugural Legacy of Americana Award from Nashville’s National Museum of African American History in partnership with the Americana Music Association, and her critical acclaim includes in-depth profiles by CBS Sunday Morning, The New York Times, The New Yorker, and NPR’s Fresh Air, among many others.
Named Artistic Director of Silkroad in 2020, Giddens is developing a number of new programs for the organization, including one inspired by the history of the American transcontinental railroad and the cultures and music of its builders. She recently wrote the music for an original ballet, Lucy Negro Redux, for Nashville Ballet (premiered in 2019), and the libretto and music for an original opera, Omar, based on the autobiography of the enslaved man Omar Ibn Said for the Spoleto USA Festival (premieres in 2022).
As an actor, Giddens had a featured role on the television series Nashville.
.
ORIGINALS

What listeners say about To Balance on Bridges

I especially enjoyed the historical information that she imparted through her words and her music. Thank you for allowing your readers and listeners to feel connected.

The Journey of a Genius just beginning her Mission

Audible Originals and the MacArthur folks sure knew what they were doing introducing us to this Woman. I have been a big fan of Rhiannon Giddens since I first saw her playing with The Carolina Chocolate Drops and later with Elvis Costello et al in the film Lost Songs: The Basement Tapes Continued a few years back, a terrific film by the way.

She is a tremendous talent, a brilliant singer and player, who sees herself as a Woman on a Mission. She is the Real Deal. This production, while too brief, showcases her many facets. Listen and enjoy. Five Stars!

Looking back we see our way forward

This contribution is absolutely worth a listen if you have any interest in American history. I’d never heard of this artist before this Audible original performance, yet through this peek into her undeniable talent I have become instantly mesmerized by her varied musical abilities. Bravo! What an incredible inspiration.

Sat under the moon and listened

This felt like an old time radio hour. What a pleasure to learn Ms Giddens' story so in-depthly! Her empathy and intelligence lead her caringly through life. And then the different examples of her past voice work. Highly recommend!

Enriching, engaging, and so much more. I was exposed to Giddens a few years ago when a friend sent me a recording of Julie. I have loved her work ever since then.
Enjoy!

Just so powerful and beautiful. I had great respect for Rhiannon Giddens before, but this was lovely and lush and very insightful. Definitely made me see her in a new light, highly recommend!

Ms. Giddons continues to enthrall me! I have followed her for a while and I appreciate her ability to inform as she entertains! Thank you, Rhiannon, for helping me to understand African American history and experience.

Rhiannon is both familiar and utterly unique. Her story glides in smooth rhythm and us all soul

A beautiful mix of story & song

Such a beautiful, articulate mix of story & song, with the bonus of being read by the author-artist. Treat yourself to this educational gem.

Young singers and musicians should listen to this

Traces her personal and musical journey. Simply stunning and so-o worth listening to. A musical podcast in itself.