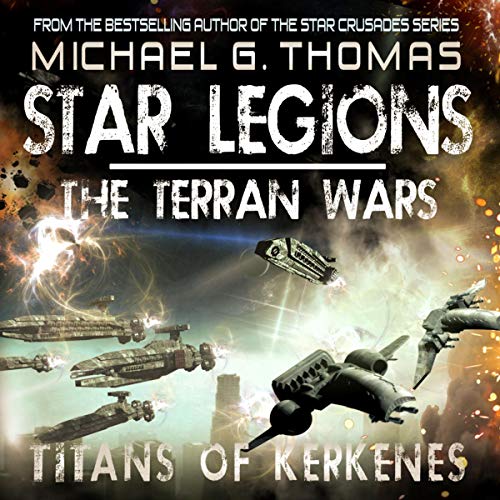 King Agesilaus and his Terran Legions have won their first victory against the Median Empire. Despite sustaining heavy casualties, they established a vital foothold in enemy territory. Yet the Empire is far from defeated, and they begin to ready their forces for a counterattack. In a display of overwhelming power, they throw fleets of ships and armies of levies and mercenaries against the Terrans. The outcome is uncertain, until Agesilaus and his generals uncover a stunning secret: a relic of the past, a weapon that could annihilate an entire fleet in hours. If true, the discovery could inspire others to rally behind Agesilaus and bring him victory against the Empire.

As enemy fleets converge, Agesilaus gives battle while sending an elite force to the unexplored Kerkernes System to locate the relic. Princess Kyniska and General Xenophon lead the operation to find the weapon before the enemy can use it against them: a weapon that some believe might be holiest of them all, a mighty Titan.

Titans of Kerkenes is the second book in the Star Legions: The Terran Wars series by Michael G. Thomas, the best-selling author of the Star Crusades series. This is the stand-alone sequel series to the best-selling Ten Thousand series (available as a seven-book box set).

What listeners say about Titans of Kerkenes

Imagine the battles between the Greeks and the Persians. The various wars fought in that area over the years. Imagine what it would like like if those battles were reimagined into wars in space between massive fleets battles as well as down to the personal fighting in ship to ship boarding in space. Better yet, it’s already been done. Listen to or read this series and if you are a fan of ancient Grecian wars, Star Wars or better yet both, you will be well beyond satisfied with the tales laid down here. Well written and well narrated you will feel as if you are there on the deck with the commanders or shoulder to shoulder in the narrow ship corridors with the smell of battle
In the air. I was voluntarily provided this free review copy audiobook by the author, narrator or publisher

I really tried to get into this book. The narration drones on, like a boring documentary. There are so many details that the story never has a chance to take off. The characters are forgettable and there is nothing to invest you in the story. I tried multiple times to finish it and just couldn’t do it. I don’t like leaving bad reviews but this book is definitely not for me.