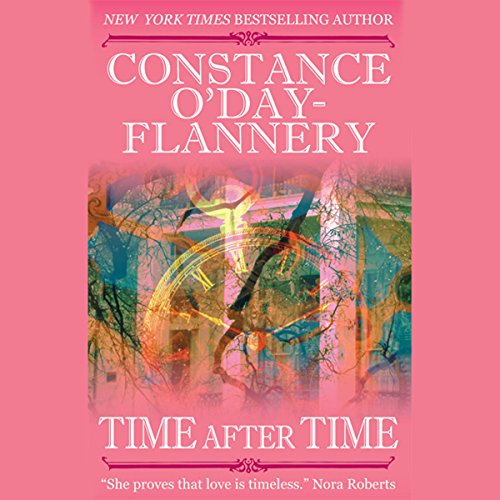 By: Constance O' Day-Flannery
Narrated by: Holly Cate
Try for $0.00

Best-selling award-winning author Constance O' Day-Flannery is the one true Queen of Time Travel Romance. Join her now in a story of a disillusioned young widow who returns to the past, caught, to her horror, in an unflattering lime green bridesmaid's dress when she meets the man whose love is destined to be hers.

After existing in a fog since the death of her beloved husband, Kelly Brennan is suddenly ready to take control of her life. Only she didn't expect her new life to begin in post-Civil War New Orleans. Kelly isn't sure if she's losing her mind or just enjoying a really good dream ... one chat comes complete with a man who looks strikingly similar to her late husband. Widower Daniel Gilmore is the epitome of the Southern gentleman: charming, handsome and with a devilish glint in his eye that calls to the dormant heart she's locked away.

In the years since Daniel's wife passed away he has shuttered himself off from those dearest to him, and not even his precocious daughter Lizzie has been able to draw him out of his misery.

But then Lizzie brings home a strange woman in a dreadful gown who speaks about odd things called "automobiles" and "telephones" - a woman who bears a remarkable resemblance to his wife. With a daughter in need of a mother and a heart in need of love Daniel yearns to keep Kelly by his side ... provided he can let go of the past long, enough to live in the present and convince Kelly that his present is where she belongs....

What listeners say about Time After Time

What a fantastic Surprise!

This was such a wonderful surprise! Kelly attends the wedding of her college roommate in New Orleans and finds herself falling through time. She is found by a precious girl who insists she is a fairy and takes her home to keep. Kelly discovers a family is desperate need of healing and together they learn to love and play again. It is a Hallmark movie in a book. When I finished listening, I just couldn’t help but feel the happiness and joy of the story.

A roller coaster ride for your emotions

I hadn't heard of this author before and took a gamble which thankfully paid off. If you like a time travel inspired romance, that's got some really great characters who all star in a touching plot that centres around 2 bereaved people who slowly open their hearts and start to love again and a little girl's needs for a friend, then this is your kind of book.

Touching, thought provoking, funny, romantic, sad, enjoyable and also a bit of a tear jerker - all sum up this listen.

Worth a credit? It was a ride I'm glad I took - so, yes it didn't disappoint.

I love the author, I love the story, the performance was not the best. However, I couldn't do any better. The reader seemed overly dramatic at the wrong times. I could hear her swallow too.

I enjoyed this tale a lot. the voice for the little girl was too much like an old woman.

Story ok but not great!

A little immature, not a well thought out story. The ending left me feeling like it needed something more and, I wasn’t sure what that more could have been to make it a better story. The characters were great! However, I’ve learned not to listen to a story’s review because, they always end up disappointing you in the end. The narration was awesome!

I struggled with the voice of the young, almost 13 year old, girl in the story. The narrator made her sound like a five year old throughout the book.

Couldn't get past the first chapter

Accents were over exaggerated and difficult to listen to. Gave it 30 minutes and had to stop listening... couldn't get to the story as the narration was just too painful to listen to.

Audiobook. Time After Time is a romance-time-travel novel set in 1888. In modern day 2001, a beautiful girl from Philadelphia takes a flight to New Orleans to stand up for an old college friend at a wedding. During the reception, Kelley Brennan takes a stroll into the moss-draped woods of the south dressed in her key-lime-pie bridesmaid dress. Within moments she is transported to 1888, believed by a young girl to be a fairy. The story proceeds to a romance with the little girl’s widowed father.

About mid way through the book, I was hoping for more serious fictional conflict, but it’s pretty much a formulaic girl-meets-boy story and is limited to the two lead characters overcoming their pasts and succumbing to their love. Kelley easily slipped back in time to 1888, so I thought the author might make her easily slip back to modern day, as well, thereby increasing tension. I guess I was hoping for a little more to the story.

Regarding the audio production, the voices were great with the exception of the child, which was awful.

What an adorable story!

If you could sum up Time After Time in three words, what would they be?

This was a very surprising book. Not my normal read but I figured what they heck, I'll give it a go. The story was so sweet I think I may have gained a cavity! The ONLY bad part of this entire book was the voice for the child! It was HORRIBLE. However other than that one voice this is the best narrator I've heard so far. I plan on looking for more of her readings because she is that good, that soothing. She brought laughs where they were meant to be when if you were just reading the book, I'm sure you wouldn't put the laughs there. She was absolutely great! Other than that one voice!