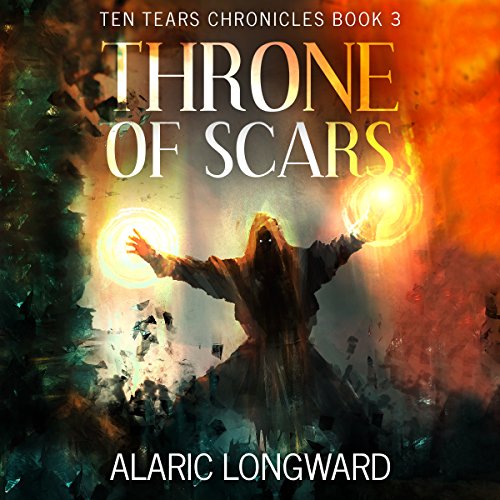 Throne of Scars: Stories of the Nine Worlds

By: Alaric Longward
Narrated by: Kristin James
Try for $0.00

Goddess Hel's terrible curse spreads rampantly across the Nine Worlds, and only the Gjallarhorn, the horn to open the closed gates, provides some hope of restoring what was lost.

In war torn Aldheim, Shannon's victory in the White Court has been a temporary thing. Euryale might be dead, but Shannon and her friends are besieged in Himingborg by the elves, who finally have a common enemy in Shannon. Mad goddess Hel's demands on Shannon to punish Aldheim makes the situation even grimmer for both the besieged and the besiegers.

Ulrich, as the sole Ten Tear remaining at Shannon's side, is requested to go on a quest. Reluctantly, he will lead an expedition to Svartalfheim to find Dana and the Horn in hopes of saving Shannon from the elves and Hel both. While there, he must balance between his friendship and oath to Shannon, while trying to figure out what foul plans are being woven behind his back in the land of Night. His struggle to remain loyal in the army of the draugr is getting increasingly hard, after he discovers the dead have no friends, only tools.

Will Ulrich find the Gjallarhorn, and will he save Shannon and the Nine Worlds in the murk of Svartalfheim?

What listeners say about Throne of Scars: Stories of the Nine Worlds

Don't mess with Hel or her's

Where does Throne of Scars: Stories of the Nine Worlds rank among all the audiobooks you’ve listened to so far?

Alric a stalwart partner and friend

What does Kristin James bring to the story that you wouldn’t experience if you just read the book?