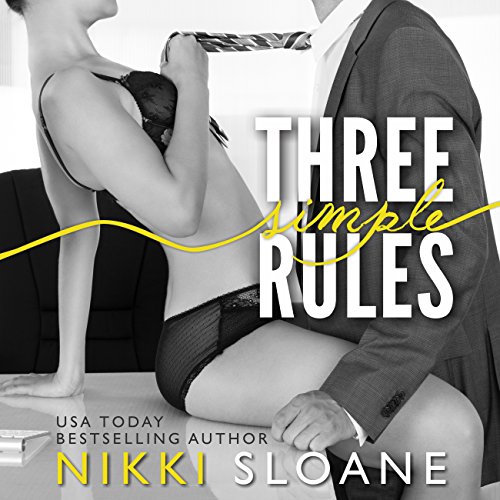 By: Nikki Sloane
Narrated by: Muffy Newtown
Free with a 30-day trial

I would do anything for my dream job. Now I have to.

In order to save my skin at the office, I'm forced to sell it at an exclusive and illegal blindfold club. He paid thousands of dollars for one night to own me, but when my blindfold comes off, I want more. More nights, more rules, and more from this unavailable and uncompromising man.

Rule number one, no questions. Rule number two, no lies. But, rule number three? That's the hardest one to obey.

This book contains strong sexual content including M/F/F and is intended for mature audiences only.

Three Simple Rules by Nikki Sloane
Narrated by Muffy Newton
1st in an interrelated series. Can stand alone but leaves you hanging for the next couple.
4.5 Stars
Some of my book besties recommended The Blindfold Club Series to me many times. I have added it to my sale lists and it’s always been one of those books that I bought but never got to, permanently on my TBR. So when I saw that Three Simple Rules by Nikki Sloane came out on audio, I grabbed it so fast! And let me tell you, there is a reason for my book besties! They never steer me wrong.

First let me start by saying HOLY HOTNESS!!!! This is the hottest book I have heard/read in a long time, and that’s saying a lot. But there was still a great storyline to go with all the hot sex!

Evie is a graphic designer who has been in love with a friend for years. Her boss is a cold, unfeeling jerk (even if he is hot), but she absolutely loves her job, and has worked her butt off for the past 2 years there. So when she screws up and misprints a job, it’s over $9,000 to reprint it. She knows she will get fired, so she begs her boss to let her cover the costs. The problem? She doesn’t have $9,000 and she needs it right away.

Evie’s roommate Payton is a very sexual person and has been trying to get Evie to work with her at an exclusive blindfold club. This is a place where the women are tied up and blindfolded while strange men go room to room to decide which one they want for the night. The price goes up the more the girl is willing to do. If Evie checked enough boxes, she could get the money in one night.

“I was about to become a whore.”

OMG, I just got a hot flash thinking back to that scene! When the high bidder got her, he immediately set some rules.

“I have rules,” he said. “You don’t get to ask questions, no matter what.” His deliberately slow, indecent rhythm made me crazy with need. “Do you understand?”…
Rule two is you answer my questions, and you have to answer them honestly.”
I could do that, so I nodded quickly.
“The last rule is your body belongs to me, so that means your [Os] are mine. You don’t come without my permission.” ...
“There will be consequences if you break any rule.”

The scene was so hot, I swear it was one of the hottest I ever read, but warning, there is a little girl on girl action which didn’t bother me in the first scene. It was hot!

When he decided to remove her blindfold…she was not happy with who she saw. Soon enough though, she was convinced otherwise.

“This authoritative version of him chilled me and yet set me on fire.”

And they are ridiculously hot together. He is so bossy, and while she takes it, she never seems like she is ‘less than’. She loves the dominance as much as he does.

I loved the story and it totally lived up to my expectations, but there was a mild cliffy at the end, that sadly, I will forget before the next comes out on audio. But I will say, this book can stand alone, despite the cliffhanger. It isn’t this couple's cliffy, it is her roommate Payton’s, the heroine in the next book.

I want to mention that there was also a second scene with some f/f/m action that rubbed me the wrong way. I just felt like she was manipulated, plus, he enjoyed it a little too much.

Narration:
I have to say that Muffy Newton was one of the best narrators I have heard. She narrated the whole story, yet the voices she did for other characters were so different! She even did a totally sexy guy. I immediately went to audible to see what else she has narrated, and I was so surprised it wasn’t more, because she is fabulous.

•Unique twist on a common storyline.
•So freaking hot, like one of the hottest in the last year.
•A little f/f/m which I rarely read in mainstream romance books.
•Very addictive.
•The hero was so dominant.
•The little graphic design puns.
•Some funny moments.
•It wasn’t a cut-and-dry easy relationship, real issues got in the way of their happiness.
•Evie was a normal, hard working girl with regular problems.
•The hero was a regular guy, not a millionaire.
•Amazing narration.

•The next isn’t out on audio yet and this one left with a bit of a cliffy for the next couple.
•Though I really liked the f/f/m, I wasn’t thrilled with the way the second one went down. But it was still hot!
•She seemed very different in the first chapter or two (kind of a prude) than she turned out to be, it was such a fast switch that gave me whiplash.
•Not a fan of Payton, I hope I like her better in her book.

The Down & Dirty:
Make sure you have your man or BOB (battery operated boyfriend) around when you read the super hot Three Simple Rules. While it was one of the hottest books I read in the past year, there was still a really good story. I loved the characters, though I am a little iffy on the heroine of the next book. There was a lot of sex between the couple, and 2 scenes with two women and the hero. I loved the first scene, but the second was a bit out of my comfort zone. At first I was a little disappointed that Three Simple Rules had just one female narrator, but let me tell you, she was phenomenal, and her male voice was almost as sexy as some of the male narrators out there. If you like your books SUPER STEAMY, don’t skip the blindfold series by Nikki Sloane. I can’t wait for the next to come out in audio. I hope it does!

I love Muffy! Best narrator ever!!! This story didn't have me wanting to skip through at all! I can't wait to listen to remaining books, I do not post reviews often but I am now, I'm selective and picky for a great romance with a bit of edge and this series has it! Can I say again the narration is my favorite top five narrators!!! ( now if you don't like the cross from nice romance to pull your hair back lust... it may be too much for you but with that said storyline is head on and really one of my new favs!)

WOW! This book was HOT!! When it first started, I really thought it was going to be light on story but it wasn't at all. This is a love story for sure! The characters were great, he is dominant is the best way, she is a strong women with goals! All of these things are great but the best part was the sex ;) It was SOOOO hot!!! But beware there is a cliffy but I didn't want to throw my phone when it ended. The narration was great too!!

I really just want to listen to this again already!

Wow! This is a SEXy hot listen. It's very low on the drama and heavy on the m/f sex (also f/f, & m/f/f) and mild BDSM. I enjoy mfm threesomes but quite surprised I liked the intense mff as much as I did. This has a cliffhanger for a separate 2nd set of characters leading into book 2. During and after this listen, your spouse is getting very lucky. ;-). I read this has 5 books out but only two on audible. I hope the others are in the works, if not I'm getting the kindle version. Narrator sounds familiar to me. Regardless Muffy's narration is fantastic! If I smoked, I'd need a cigarette after this.YES credit worthy. Starting on book 2 with my next credit.

Wow! What a great, sexy romance from Nikki Sloane! Great characters, hot sex, good story. I love a heroine who gives as good as she gets. My only complaint are with the rather weak finally conflict and the frustrating cliffhanger ending. Hurry up and release the sequel!

The Steam level is out of this world

Oh yes I would!

How Evie knew exactly what Logan needed and was willing to wait on him to come to her.

What does Muffy Newtown bring to the story that you wouldn’t experience if you just read the book?

I'd read the book, but Evie blossomed as read by Muffy Newtown.

Bought by the boss. (this movie would NOT be allowed to be mainstream. Not and do it justice anyways...)

The performer makes every question sound like a life and death crisis. "What??!!" Every male is a domineering jerk and the main character is a habitual victim. "What??!!"

The description made it seem like the main character was in control of her destiny and made her own difficult (though implausible) decisions. No. She's just a pawn for the overbearing men in her life. "What??!!"

This isn't erotica, it's romance with some explicit references. "What??!!"

Note to the performer: please take the "whats" down a few notches.

Absolutely LOVEDD this book, and the other three. Very much recommend it. I listened to it most likely 3 different times over the course of a year, and this trilogy ruined all other audible book for me since I keep trying to find books that are equal or better to listen to! LOVE Muffy’s narration. She brought the characters to life for me. LOVE LOVE LOVE!

FANTASTIC! A must listen!!

Hated the weak female character. Narration was just okay, didn't like the male voice. But, it was really the story that was so weak and unbelievable.

The hottest thing I've ever heard!

I love the sex parts! The narrator is good. But she sounds like Erin Mallon. I was so turned on whenever I listened. I wanna come with the sexy characters in the book.And I wonder what happened at last?

cant wait to delve into thr next one