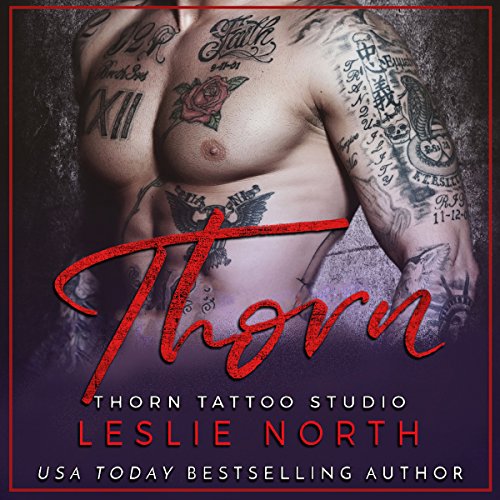 Luciano DeRose is looking to get the hell out of town. He’s been absent from his position of head artist at Thorn Tattoo since the day he watched his future go up in flames. However, the bonds of family are strong, and he’s dragged back into town as a favor to his younger brother. But Luciano isn’t staying for long, and certainly not for the anniversary of the day his life went to hell.

Melanie Noel has spent most of her adult life fixing Luciano’s. She’s his virtual assistant, organizational guru, and problem-solver extraordinaire. However, this ex-hippie chick wants her boss, and secret crush, to see that he can finally move on. Melanie thinks that this anniversary is the perfect time for Luciano to face his grief, let go, and finally be free to see what’s been waiting for him all along.

When Luciano decides to do everything in his power to leave, Melanie sees that she needs more than logic to make him stay. Risking her heart to save the man she’s loved from afar, Melanie gives into her desire for Luciano - sparked by a world-rocking kiss. The heat between them has the power to heal all wounds, or it may set both their lives up in flames.

What listeners say about Thorn

This is the second book in the Thorn Tattoo Studio Series, but it can be listened as a standalone. I love Luciano and Melanie's story. This is Luciano's second chance love story, after his ex's death. Melanie is a strong woman, so understanding. She makes all it took to help Luciano to go ahead with his life and finding love again. This story is believable and so beautiful. There is a beautiful and realistic HEA. I love Leslie North's writing and I love her HEA endings! I can't wait to listen to the next and last story in the Series. The narration was great and easy to listen. I received this free review copy audiobook at my request and I have voluntarily left this review.

This is the 2nd installment of the Thorne Tattoo Studio series. Luciano DeRose lost the love of his life. After the traumatic event, he fled Las Vegas and the memories of her. However, his brother needs him to come back and hold down the fort at the family tattoo shop.

Melanie Noel is Luciano's assistant. Luciano is so talented that he is in demand for shows and conferences all over the country. It is Melanie's job to organize his travel, hotels and anything else he needs to make his nomadic lifestyle flawless.

As they both returned to Las Vegas, Melanie is determined to help Luciano face and work through his demons, whether he wants to or not. She loves him and wants him to live life in the present and not the past.

EM Carberry has a wonderful voice but I found his performance so very slow. I had to turn the speed to 1.5x. At regular speed it felt like the book was dragging on.

I am a huge fan of the Thorne Tattoo Studio series. The first book, Rose, received 5 stars from me for story & overall. Thorn is a stellar follow-up book. I hope to have the opportunity to listen to the final book in the series.

Thorn is a 5 star listen in the categories of story & overall. The performance receives 3.5 solid stars from me.

*I received this book in exchange for my unbiased review. I would recommend it to anyone who likes a great romance with some mature situations and doesn't mind a bit of strong language.

Please take a moment to rate my review below. Simply select 'helpful' if you feel it helped you decide. Consider following me on Audible if you would like to read more of my reviews – rate and share them. Thank you!

A family in crisis, a business at a crossroads and a man in pain. Known for her intriguing heroes and sultry vixens, Ms. North tamps down the heat and delivers more of the sweet. The tattooed bad boy with the broken heart and the battered soul meets his match in a flower child woman with a few choice secrets of her own.

I received this audiobook free for an honest review. This was a fast-paced great story. It takes a while for Melanie and Luciano to get their act together, but there is a lot of story getting there. The narrator did an excellent job with the characters and the story. I need to go back and get book 1.

Leslie North is always a great go to for a great, quick listen. I absolutely adored Melanie. I always love a strong female character. I especially loved how she handles Luciano, who seems to always need a swift kick. This was my first E.M. Carberry experience and will not be my last.
I received this book in exchange for a fair and honest review.

Thorn by Leslie North was a great read. It is the second book in the Thorn Tattoo Studio Series. Luciano is the head artist at Thorn Tattoo who is just trying to get out of town since his ex died. Melanie has spent a lot of time fixing Luciano's life even though she has a crush on him. I loved reading Luciano and Melanie's story and cant wait to read more by Leslie North.

This could have used added introduction of Luciano by maybe starting at the Studio and meeting Riley as she and Gio leave for their honeymoon. But it starts with him neck deep into trying to manage the place after being a free spirit for so many years.

Don’t get me wrong, it does fine without the added backstory. It’s a slow start romance that is worth the wait.

Luciano is grieving the loss of his fiancee Cassandra who dies almost 4 years ago, but he hasn't even started to move on. In fact he seems to be obsessed with holding on. I realise there's no limitations on grief and that everyone deals in their own way, but he isn't dealing to the extent that Cassandra is a third participant in the relationship developing between Luciano and Melanie.

Both Luciano and Melanie behave badly at times but Luciano even more so. If someone treated me the way Luciano treats Melanie I would neither forgive nor forget.

The writing is excellent; as I've come to expect from Leslie North. However i had a tough time connecting to the story due to my personal preferences.

The narration is well done with good character voices and a smooth well paced delivery.

I really enjoyed listening to this book by Leslie North and was happy to discover a new to me narrator. I was impressed by the range of distinguishable characters E.M. Carberry was able to perform. The story of Luc and Melanie was not instant attraction, but friends to lovers discovering the importance of living. The imagery in this story was great, and one could feel the inner-demons chasing Luc. I requested this review copy audiobook and have voluntarily written this review. I will definitely listen to more books by this talented author and narrator.

Luciano DeRose is deeply damaged, he's lost the love of his life, Cassandra, and since then he's been running. He's left Las Vegas and spent two years touring all over immersing himself in his art. He is a world class tattoo artist, Thorn Tattoo in Vegas was started by his father and then passed on to his eldest brother Antonio who is not an artist but has a head for business. Luciano and Giovanni are the artists of the family. (Giovanni's story is told in Rose book one of this series.)

In order for Luciano aka Luc to live his life the way he wants he hired Melanie Noel to be his personal assistant and the anchor his life needs to function, he really would be lost without her. Their relationship is strictly professional and although Melanie can organise anything she can't help him when he has to return to Vegas and be acting manager of Thorn Tattoo whilst Gio and Riley are away.

It is getting close to the anniversary of Cassandra's death and Luc feels that has to get away but Mel tries to make him see that in order to heal and live a full life he has to face down his demons and move on.

Mel has her own demons, her childhood has made a lasting impression on her and now she's back in Vegas she doesn't want to leave. She's always done her best for Luc and has managed to hide the fact that she loves him from him. But things are coming to a head, will Luc let go of his past, will Mel be able to help him. Will either of them be able to survive losing what they have? Can they have more?

I thought that Mel's character and personality were really likeable and her devotion to the man she has loved from afar was so deep. I thought that Luc wasn't always deserving of her, he was blinkered and hurtful at times but grief can do that to you.

I never give spoilers so I'm not going to tell you any more, but what I will say is that this book was well written by Leslie North and was beautifully performed by E M Carbury he brought Leslie's characters to life. This series is definitely not one to miss, I'm enjoying this series about the DeRose brothers and look forward to Antonio's story.

I was gifted this book and am voluntarily writing my review