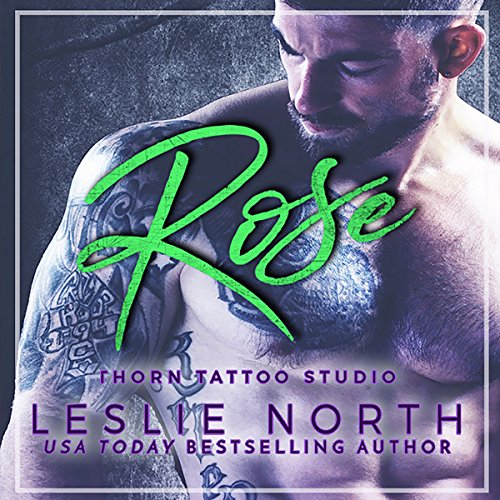 Giovanni DeRose only came back to Las Vegas to work with his brothers in the legendary family tattoo studio. Instead, he’s found himself the leader of a sinking ship, thrown together with a gorgeous woman who won’t back down. But with the threat of closure if he doesn’t turn a profit ASAP, working alongside her may be his only option. Gio can do just about anything with his talented hands and bare skin, but this bad boy will need something different if he’s going to save Thorn....

Riley Bryne is an Irish lass that’s as smooth as whiskey - if you don’t mind the burn that comes along with it. As Thorn’s new co-manager she’s desperate to pull it back into the green to clear her own debt, but her numbers-focused tactics throws her up against her Gio’s art-centered direction.

Challenging the tattooed hunk is easy, but stopping herself falling for his smoldering touch? The odds don't look good.

Riley is business savvy and a little bit bossy - something Giovanni finds frustrating in the studio and hot as hell when he’s got her pinned to their office desk. But if Thorn Tattoo is going to survive they’ll need to combine not just their bodies, but their talents outside the bedroom, too.

What listeners say about Rose

An immovable force meets a force of nature.

An immovable force meets a force of nature. Sparks fly in this battle of the tattoo artist and the headstrong temptress. Ms. North picked a super title for this prickly couple. From the most stubborn of thorns Riley and Gio created something beautiful. Animosity bloomed like the most sensuous of buds and became as breathtaking as a rose.

This is the first book in the Thorn Tattoo Studio. I love tattoo shop stories. Besides the love story, Leslie North added a lot of information about this Art. It's really interesting and well written! I love the two main characters, Riley Bryne and Giovanni DeRose, they are great together. It was my first E.M. Carberry's listen and the narration was great. I'm looking forward to read/listen the second book in the Series.

The narrators voice wasn't really believable to me as a female voice. That being said by the end I had gotten around it.
"I was given this free review copy audiobook at my request and have voluntarily left this review."

Geo and Riley are incredible. The sparks fly and dialogue snaps. Perfect book to settle in with. I enjoyed every minute (minus one nasty fall, I could have lived without) Highly recommend! I can't wait to look for other books in the series.

Love her work!! Love this narrator! The story is great and sexy! I can’t wait for the next one! Bring on the inked men!

This is an unbiased review with a credit from audiobookboom

Giovanni DeRose is trying to save his family's tattoo shop. Someone hired Riley Bryne, a beautiful, smart woman to get the shop in order on the administrative/fiscal side.

As Riley gets the shop into shape, complete with earning the respect of the artists in the shop, the love/hate relationship between Riley and Giovanni (Gio) heats up and cools down. There are some twists and turns and a few unexpected surprises along the way.

EM Carberry narrated this book. I was not thrilled with his performance. The majority of the male characters sounded very similar. I also didn't realize that Riley's character grew up in Ireland until about halfway into the book. Perhaps that is my fault for not paying close attention to the beginning of the book, but Carberry did not perform the character with an Irish brogue or inkling of an accent.

Overall, I enjoyed this story. Leslie North has created a group of multidimensional characters and will do well as she continues writing the series.

Notes for the listener: some strong language and adult themes

*I received a complimentary copy of this book in exchange for leaving an unbiased review.

If you found my review helpful in your decision about this book, would you please select "helpful" directly below this review? I also invite you to follow me on Audible. Thank you so much.

Great book! love story with hot sexy men!! gio comes back to vegas for his family and the tatoo shop that is way behind on profits! his brother hires riley whos sexy, funny, vibrant, talented and very smart to help bring the tattoo shop back ! gio and riley fight their chemistry which makes it even hotter! i was given a copy of this audiobook for free by my request and voluntarily left this review!

From the first meet, Gio and Riley clash but their chemistry does not let them stay away from each other. They are both complex characters and a contradiction as it is revealed throughout the story, but it works, they mesh so well. A good set of secondary characters that add to the story. It was an interesting and informative look into the tattoo artistry world. I liked the flow of the story, some tension, a bit of drama, steamy scenes and it ends in HEA, I enjoyed listening to it. Looking forward to the next story.

New voice for me, Mr. Carberry is a good fit for Gio's temperament. It is flexible to differentiate the many male characters, not so much for female ones, but that didn't take away from the story. I will check his other works for sure.

It Drew Me In and Kept Me Hooked

Giovanni DeRose, what can I say about him, he's a walking talking turn on! He's covered in tattoos but wears a business suit in a tattoo parlour. He's a walking talking contradiction to what I would expect to find in a tattoo parlour. He's also stubborn, arrogant and refuses to listen to anyone about the best way to save Thorn Studios. Riley Bryne has been hired by Giovanni's older brother Antonio, who is the owner of Thorn, to help turn around the fortunes of Thorn Studios. Gio is an artist and hasn't got a head for figures, but then that's Riley's forte, she's a graduate from Princeton, she's brilliant with figures and business plans. She's also small, delicate looking and has skin as pure as the day she was born. Not what Gio expects to see in 'his' studio.

When the two of them meet the attraction is instant, but neither of them acts on it, Gio because he wants her gone and Riley because she doesn't want to put her job at risk. They clash over everything, Gio refuses to listen to her ideas, and it looks like Thorn has no future. Then Riley comes up with an idea which may save them but will Gio take it on board and if he does will it work?

I can't say anymore about the plot of the story without giving too many spoilers which will totally ruin your enjoyment of the story but what I can say is this story has hidden depths, there is much more to Riley than we are told at the start of the story. Why is such a talented financial expert willing to take a pay cut, move all the way across the country to work in a struggling tattoo parlour? What secrets is she keeping?

I loved this book, I really enjoyed the storyline and look forward to finding out more about the three DeRose brothers. The other members of staff at Thorn also were well developed and fleshed out. I also enjoyed immensely the narration given by E. M. Carberry, I could listen to his voice for hours!

I am writing this review voluntarily and it is my own personal opinion.

A tattoo studio in Las Vegas financially going under when a woman, Riley, is brought in to save it. Business is her strong suit, or so it appears. There is alluding to her desire to save this shop, but und
known why.
Gio is a famous tattoo artist at Thorn, the shop that must n
be saved. His father began the shop and his brother owns it. He is an artist and not good in business, angry his brother brought in Riley.
There is a friction and attraction between the two, She doesn’t want to become involved with the arrogant Gio, but is attracted anyway. He is angry over the changes she wants to make to the shop, yet is also attracted.
So, there is tension, some fun secondary characters, a little hit sex and a couple of twists that are surprising.
The narrator was great..,Leslie North books always has make narrators with the deepest, sexiest and excellent voices. Great narrator.
An enjoyable story that keeps involved and listening all,the way through