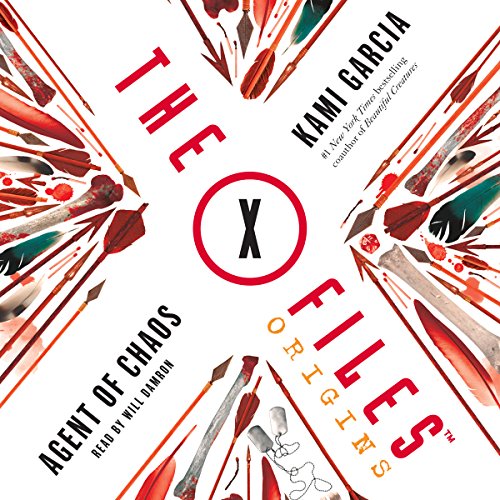 The X-Files Origins: Agent of Chaos

By: Kami Garcia
Narrated by: Will Damron
Try for $0.00

How did Fox Mulder become a believer? How did Dana Scully become a skeptic? The X-Files Origins has the answers.

The X-Files Origins: Agent of Chaos explores the teen years of Fox Mulder, the beloved character depicted in the cult-favorite TV show The X-Files. His story is set in the spring of 1979, when serial murder, the occult, and government conspiracy were highlighted in the news. The audiobook follows Mulder as he experiences life-changing events that set him on the path to becoming an FBI agent.

What listeners say about The X-Files Origins: Agent of Chaos

I enjoyed this story of Fox as a teen. Fox and his friends go on an epic adventure down an unforgettable road. I believe Skinner makes a guest appearance before he is in the FBI. Phoebe's character I had a hard time with as she was rude.

Kami Garcia has crafted a fantastic prequal story for the youthful Fox Mulder as he battles his inner demons and the loss of his sister, shaping him into the fearless FBI agent we all know and love. Loved this book and would highly recommend it to anyone who is a fan of the X-files series or anyone looking for a solid murder mystey. 10 outta 10!

I enjoyed this book and how it showed how Mulder became involved with his search for the truth. It was also great to see that the Cigarette Smoking Man has always been there following and undermining Mulder’s pursuit. In general a great prequel for any X-Files fan.

From the start, the story grabs with captivating questions with no answers. The story lacks action but makes up for it in story. My only problem is the ending. Which I won’t spoil, but ended in an unexpected way. It leaves plenty of questions that are probably answered in the show.

Great for anyone getting into X-files, my first x-files book.

As a big x-files fan this was perfect

Would you listen to The X-Files Origins: Agent of Chaos again? Why?

I usually listen to audio books only once but who knows.

Yes, the plot was in line with the series. I wish they would make an episode out of this book.

What does Will Damron bring to the story that you wouldn’t experience if you just read the book?

Send the script to Chris Carter so he can make an episode out of it.

Enjoyable but left me wanting.

I read both the X-Files origins books and this one was the better of the two. It's nice to meet the younger skeptical Mulder at the beginning if his search for his sister.

I enjoyed the story and was surprised to find his teenage sidekick to be a fun addition. The story is good and I enjoyed the exploration of his relationship with his father. I am a lifetime X Files fan and always enjoy when they fill in the Canon.

What left me cold though was the ending. A second part of the story is left hanging. When I read the Scully book as I expected her mystery and this one cross over but in a way that does not resolve either. While I enjoyed this one the loose ending bugged me and I found no resolution in the Scully book.

The story was interesting for a start, but at times lost some focus creating information to make up for that liss.

I very much enjoyed this story of a teenage Mulder, sometimes I felt a little uncharacteristic but overall solid

Terrible story! I was expecting much more about his family. Instead, Mulder and 2 friends play detective.

Good, but it could've been great

This was fantastic as far as it went. But I felt there were far too many loose ends left untied, the events that closed this book would make an ideal start to a sequel.