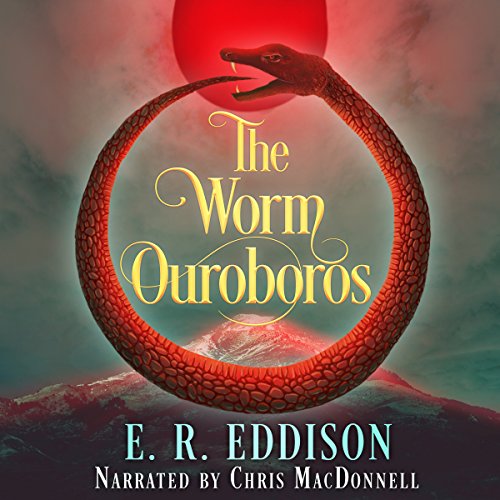 E.R. Edison’s The Worm Ouroboros inspired the epic-fantasy writers that followed him. This production is of the first edition (1922).

But the situation is worsened by the result of that match and ultimately, war is declared. A war that includes dark magic, sorcery, quests, mystical lands, and heroic high-adventure. Ursula K. Le Guin called it "An eccentric masterpiece", C. S. Lewis said it represented "A new climate of the imagination", Orville Prescott said it was "A literary event of the first order."

Critics compared Tolkien’s writing to it when he first published The Lord of the Rings and he freely acknowledged its influence. Eddison writes his narrative in a lyrical, medieval style and in the tradition of Norse mythology, Arthurian myths, and Greek tragedy. In his short dedication he says, "It is neither allegory nor fable but a story to be read for its own sake", however, the theme of repetition (the cyclical nature of life, history, and war), is undeniable. The "worm (serpent or dragon) Ouroboros" is, after all, “The serpent which eats its own tail”.

What listeners say about The Worm Ouroboros

Heavy in language but light in heart

The first thing I am going to do is lay out a warning. The language here is pretty thick, and I do not mean vulgarity or swearing. No, I am talking about an ancient almost shakespearian prose that can be a little difficult to follow. It may take you sometime to get used to it, and being able to follow along. I suspect that the written word might not present as much of a challenge, but I think that once you have it, you will have it, but it does take some getting used to before you can just follow along without deciphering.

If I am disclosing that, I must also let you know that the first bit of the book revolves around a character, who, once things get going just kind of vanishes into the background. It reminded me of Moby Dick in that aspect.

Also, this book preceded the creations of Tolkien, and may not resemble a fantasy world that you are used to seeing. That's OK, because I never feel like all fantasy worlds should look or feel the same. And, man does this one step far and away from JRR's world.

The story takes place on a world in which the people live in "lands". For example, there are realms known as Witchland, Golinland, Impland, Ghoulland, and Demonland. Witchland is filled with troublemakers, as they pull off a kidnapping in Demonland, and set off a flurry of events that causes the people of Demonland to try to get back their man.

This almost comes off like a round of haves vs have nots, as the aristocracy can be both noble and thoughtful for their underlings or completely uncaring. The book is also scarce on magic, but this is because of the dangers inherent in its usage, and only risk takers would dare to employ it.

The story is about honor, friendship, and integrity and is very well written for the time period that it comes from. As I said, it does have a few flaws (or not, maybe you like having to learn an odd speech pattern or starting off with an irrelevant character), but it is well worth the listen.

BTW, can I say what an amazing job MacDonnell did in the narration? Seriously, getting a good patter down for the language style used here had to be a bear. At least with some of Shakespeare's stuff you know to use Iambic pentameter when talking. So, lacking that I really can't say how he made it sound so flawless and natural, but he did it! I am not a fan of the cover art, I think it does nothing to sell you on what the story is about. Even though I did receive a promo code for this review it in no way influenced my considerations of the material, and in fact, inspired me to be more honest. In fact, getting a code generally makes me harsher as a reviewer as I am more often concerned what someone like Me will decide based on my review.

Witchland and Demonland shared a common peace for many years until Witchland arrives and begins making unpopular and humiliating demands. Peace becomes nothing more than a memory and war ensues. Juss and Spitfire send their brother Goldry to defeat the witch king, King Gorice, and exact revenge. Goldry’s success is short lived as he must be rescued. There are manipulations and using magic and deception, the quest to overcome the evil doers of Witchland begins.

This is not a book one can listen to in one setting for several reasons – first, it is an epic length audiobook; second, it is spoken in archaic English; and third, there are several things at the beginning that are distracting – I had to listen to the first couple of chapters two times just to be able to follow the plot. This is not necessarily bad, I found I had to do this with many medieval based stories. The language is difficult to understand at times but once the listener gets into the flow of things, it becomes easier. It is well worth the listen.

Chris MacDonnell, the narrator, did a magnificent job! His voice flowed without error. His voice was very relaxing but engaging as well. His reading was smooth and seemed almost effortless. An amazing feat given the use of the ancient style of language. MacDonnell saved the book for me – his voice kept me interested.

If you are a fan of JR Tolkien – Lord of the Rings series, this book is perfect for you. There are light moments as well as dark ones, but the style follows Tolkien.

Although I enjoy medieval style writing – Shakespeare, Tolkien, Chaucer, etc. this one was difficult for me because it is not something I am used to hearing. The distracting bit – the man in the beginning who then just fades away … that bothered me throughout most of the book. I don’t like loose ends, and this was a major one for me.

There were no issues with the quality or production of this audiobook.

Audiobook was provided for review by the author/narrator/publisher.

Chris gives a stellar performance to this classic that includes Shakespearean like English, songs and poems. Chris breathed life into this epic novel bringing each character to life in my mind. This narration of The Worm of Ouroboros is not as easy feat and not one most narrators can achieve, but Chris nailed it. The story was good but Chris MacDonnell made this story epic. Well done.

I found this to be a good but LONG read.Great writing.Really good narration by Chris MacDonnell.I was given this book by the narrator,author or publisher free for an honest review.

The depth of intentional fantasy. A classic, in its inclusion of fairytale norms while holding to a backdrop of exoticism that endears this fantasy realm as reminder that the natural world was never meant to be a playground for the ideas and technologies of mankind but rather as the proving ground for the divine. This book and this series describes the concept of eternity as Divinity originally intended... from waxing to waxing.

I thought the narrators performance was great! However, I struggled with following the story in people's motives. I found it easier and more enjoyable during portions where the author describes actions but when it came to characters talking to one another or dialoguing aloud it was harder for me to casually listen because of the Victorian language the Author chose to use. Therefore, there are sections of this book I totally didn't grasp while listening to the audiobook in the car on my way to work.

That being said, if you're more familiar with Victorian language and you listen to this kind of stuff often then you probably would enjoy this book a lot more than I did.

I really love Tolkien, and enjoy C.S. Lewis, but did not enjoy this book.

The language is dense middle English, the gods are Greek, the society is a combo of Norse and middle age English, the names are not related to anything else.
For me the story lacks the basics of great fantasy, the mapping of our real world onto an alternate reality that allows a fresh examination of our challenges and ourselves. Instead this is rather one dimensional heroic epic that describes only events and actions with almost zero internal states, with, for me, a completely unbelievable and unsatisfying ending.

There are several inclusions of historical, including Shakespeare, poetry, which instantly stands out favorably from the rest of the text.

The narrator does an excellent job with the very difficult material.

For me the story was lacking and felt like I kept stopping and picking back up at a later date. just didn't pull me in. just took to long to finish.

A classic that deserves to be better known

I can't praise the reader, Chris MacDonnell, enough for bringing this little-known treasure to life. The deeply enjoyable faux-medieval language that is its great delight is also what can make reading this book difficult for some. MacDonnell's enjoyment is clear and never flags - the Chapter 'Gro and the Lady Mevrian' is towards the end the work and yet contains some of the most beautiful writing and reading I have met in the whole fantasy genre. Both CS Lewis and Tolkien enjoyed this book and its influence on them is clear - and for my money it is wilder and more beautiful than both.