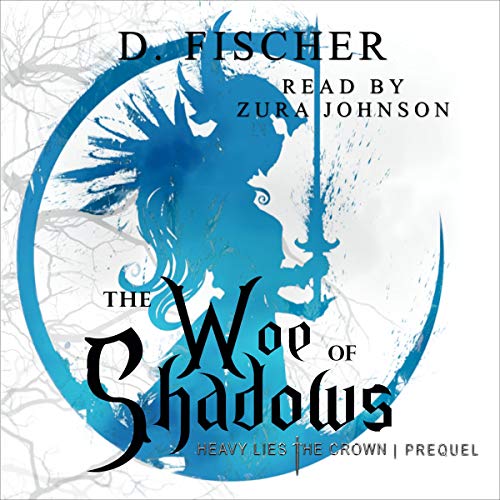 The Woe of Shadows

For the sake of her kingdom, one young mother will risk everything.

As queen of the Shadow Kingdom, Amala Ashcroft spent her days providing for her people whose skin shone as brilliant as a thousand stars.

Until a god descended upon their land.

The god warned of a cloud of darkness approaching that would enslave her people and crush her reign. To save all she holds dear, Amala must strike deals with dangerous enemies and swear blood oaths to powerful allies.

But protection doesn’t come without sacrifice.

Forced to keep grim secrets, her carefully laid plans begin to unravel in the face of the ultimate betrayal. Can Amala prevent the merciless evil from taking hold? Or, will generations to come battle the same malicious war?

Heavy Lies the Crown is a stunning young adult fantasy tale perfect for fans of Throne of Glass, The Red Queen, and The Cruel Prince.

What listeners say about The Woe of Shadows

I’m usually not a huge fan of prequels but this one grabbed my attention and kept it until the last second. It was So. Good. Zura’s narration was spot on and I cannot wait to listen to the rest of the series!

As Queen, Amala spends her days taking care of her people. Until things changed. The narrator makes you feel as if you are a part of the story.

I really enjoyed this book! The storyline was well developed, the characters were complex and well developed and the story world was detailed. The narrator did an excellent job of drawing me in and I felt immersed in the story! I always enjoy books by this author and would highly recommend it!

I listened beginning to end! It was so good!!

I loved this one! Can’t wait to hear more about this story. I didn’t want it to end.

spoiler free review: Wow this world was so vivid. I could picture everything being described! The author's writing skill is amazing! The characters are well developed. their world is well developed and reach with history. I didnt know if I was at work or in a new world. I am beyond impressed with this story and this author.