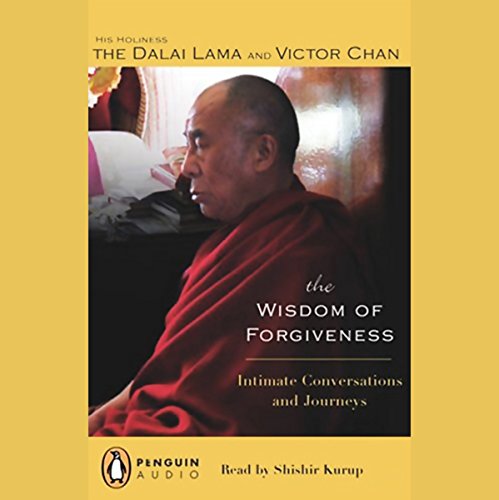 The Wisdom of Forgiveness

By: His Holiness the Dalai Lama,Victor Chan
Narrated by: Shishir Kurup
Try for $0.00

When Victor Chan first met the Dalai Lama in 1972, it was after a series of adventures, some harrowing, that had taken the young traveler from his native Hong Kong, across Asia, until he arrived at His Holiness's residence in Dharamsala. Chan worried that the Tibetan leader might receive him warily because of his Chinese heritage. Instead, the Dalai Lama was amused by Chan's black ankle-length Moroccan cap and long ponytail, and this first encounter quickly blossomed into a warm, enduring friendship.

Over the next three decades, Chan would travel the globe with the Tibetan leader. From India to Ireland, from private meditation sessions to meetings with world leaders, Chan was granted unprecedented access.

The Wisdom of Forgiveness is a heart-to-heart conversation between the Dalai Lama and his dear friend. It allows us to discover what profound meditative insight and suffering feel like to an enlightened being; what he does daily to develop himself spiritually; how he feels about violence and the circumstances under which he could see committing an act of violence; how he has learned to love his enemies; and why it is that doctors report that the heart of this holy man in his late 60s resembles that of a 20-year-old.

We've heard the public voice of His Holiness, and now we are invited to listen in on his personal explorations, to accompany him on his own journey toward wisdom, and to take instruction on the Tibetan art of living. And after hearing the intimate voice of this great man, we are comforted in the knowledge that he is who we think he is, and he is not too good to be true.

"The book's serious call to forgiveness becomes all the more engaging and possible because of the Dalai Lama's own lighthearted spirit." (Publishers Weekly)

What listeners say about The Wisdom of Forgiveness

I'm grateful that this simple book has finally allowed me to begin to grasp the very complex notion of "emptiness." This book will prove valuable to anyone on a spiritual journey.

You might be moved to forgive that one person....

Do I recommend this book. Yes. You might be moved to forgive that on person that you have been carrying around with you for years. I was so moved. After listening to this audio, I was moved to view You Tube presentations on this topic by His Holiness. Honestly, listening to this audio brought deeper insight into all other presentations on the same topic by His Holiness.

His Holiness The Dali Lama of course is the main character but Mr. Chan's wonder, experienc and personal insights bring great value as well.

What does Shishir Kurup bring to the story that you wouldn’t experience if you just read the book?

Mr. Kurup's talents are many. He captures the spirit of forgiveness in his narration.

Caution: this film might be hazardous to your long held grudges.

not as much on the topic of forgiveness as you I'd like. but very uplifting

A wonderful intimate look into HH Dalai Lama's life. Having being witness to some events and places in the book gave pause to how accurate the entire book must be. HH Dalai Lama gave a teaching in this book which is remarkable in and of itself.

This book is horrible. The book comes across as more about Victor Chan than of His Holiness The Dalai Lama. The title is very misleading. I felt that the time spent listening to this was wasted. There are much better books on this subject available.