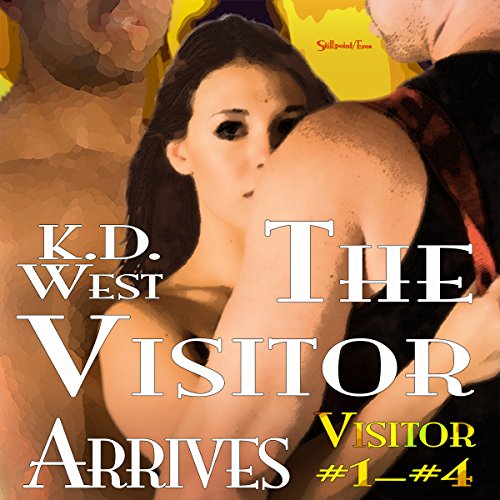 It's the world's oldest story: a girl, her fireman, and her other fireman.

When Lea heads off to Atlanta for a job interview, all she's thinking about is the work. Well, and Sean, her best friend's brother. Sean, the tall, muscular firefighter with the gentle Southern drawl and the wicked smile - whose couch she's going to be sleeping on.

Well, actually, whose couch she hopes very much she won't be sleeping on. But it turns out that Andy, Sean's roommate, is another, equally hot Southern firefighter, and so when a visitor - or perhaps two - joins Lea on that couch, it sparks a series of events that none of them could possibly have foreseen.

But that, none of them regrets. Not even a little bit.

Note: This audiobook contains explicit language and scenes of sexuality between consenting adults including MF, MMF, and menage a trois.

What listeners say about The Visitor Arrives

The narrator was Amazing. I loved the transitions, tone of voice, and flow of the book.

I really liked this book!I found the narrator,Milo Churchcuff, to be a bit dry.I believe a female narrator may have been better.
I was given this book free for an honest review

Theaters and Firefighters and Planes! Oh My!

I'm thinking this would be a more enjoyable read vs. listen.

The story (as the title suggests) is four short stories with a mmf menage, so if that's not your thing...turn around, go the other way, nothing to see here.

For the rest of us? Its a hot little story, but I did hope to have a little more fun with her gift from Kristen! (That must come in installment #5)
But, I digress...Lea comes to Atlanta for a job interview and "books" the couch at Sean's apartment. Sean is her best friends brother and she's had the hots for him for as long as she's known him! But low and behold, Sean has a roommate - Andy (another hot firefighter). Ah...a girl can dream.

You just have to read it to find out how that all pans out. The sex is hot, so if that's what you're looking for, you'll enjoy these quick little reads. There is some mm action, so if that's not your thing - you've been warned.

I received this audiobook free of charge in exchange for an unbiased review.

Couldn't finish it because of the narrator! Oh my gosh, he's not into it and sounds utterly ridiculous! I'm sorry but no. Skip this! Save your credit!

I received this audio book for free from Audio blast in exchange for an honest review.

This is a short steamy little read, although the narration sounded a little bit like a dirty old man giving a heavy breathing telephone call !

You would think a little MFM reading would having you running to the nearest cold shower to cool down and change panties, unfortunately this didn't, some of the scenes were quite steamy, but narration put me off completely.

The only way I can describe it is if you got Will Patton to whisper a whole book in a very camp accent!

I would certainly read as opposed to listen as the 4 stories weren't bad.

Just not good! Narrator ruined it!

What would have made The Visitor Arrives better?

A different narrator maybe, and some editing...

Would you ever listen to anything by K.D. West again?

probably not...but I may just read it on y kindle!

Would you be willing to try another one of Milo Churchcutt’s performances?

I was irritated...the narrator was not good for this story....and its kind of a dumb story...

I was disappointed in this book...and the narrator was the very wrong choice! I shuddered through this and would not recommend!

listening to this made me feel like I was hearing my grandpa try and talk dirty. it was just gross

I should've taken note at the title & length of the book, but I did not. I didn't even make it through the two hours and 30 minutes this short story (set of four.)

There was no real plot to hold the "mature" scenes together. It was raunchy and frivolous, in my opinion and I am, by no means, a prude.

Perhaps if the author took a little bit more time in character development and a plot, there would be a wider listening base. However, for me this was a total turn off.

I was given a copy of this book in exchange for my thoughts, opinions & this review. This is the first book I've not completed since becoming a reviewer and I am embarrassed to have it among my reviews, but I committed to it.

Thank you for reading my review. Would you take a moment and select 'yes' below if you found that this was helpful to you?