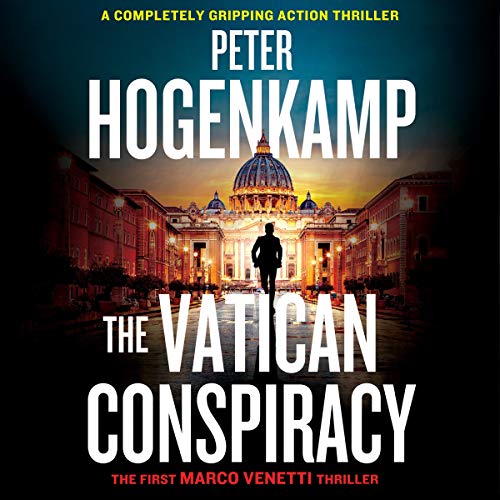 By: Peter Hogenkamp
Narrated by: Nick Landrum
Try for $0.00

“Bless me, Father, for I have sinned….” Marco Venetti has heard the words thousands of times before. But this is a cry for help, not absolution - and soon Marco finds himself racing against time to foil a conspiracy aimed at the heart of the Vatican….

It is an ordinary day in Marco Venetti’s quiet coastal parish - but the woman who’s come to confess is not ordinary. Marco has always been drawn to beautiful Elena, and she brings news that will shatter his peace.

Elena’s sister and daughter have been kidnapped, to force her to bring a gang of ruthless men into the country - if she doesn’t, her family will be brutally killed. But if she obeys, many more innocents will die.... In her desperation she turns to Marco, knowing his time in the military has given him the skills she needs. Determined to protect her, Marco draws on the violent past he has tried to forget.

A terrifying battle on a rocky island offshore leaves no survivors. But after the last man is dead, Marco finds a note on one of the men’s bodies, a map that reveals their ultimate goal: a deadly terrorist attack on Vatican City itself.

Marco and Elena find themselves racing to reach Vatican City and stop the deadly threat against the pope. But Marco quickly realizes that his mission isn’t over. Accompanied by a CIA assassin, Marco must prevent a deadly weapon falling into the wrong hands or see a truly apocalyptic outcome. Once more he must confront his own darker nature and decide whether a man of God can justify going to war.

For fans of Joel C. Rosenberg, Tom Clancy, and Steven Konkoly, The Vatican Conspiracy is a nonstop explosive thriller of betrayal, revenge, and world-shaking conspiracy.

What listeners say about The Vatican Conspiracy

This book grabs you and doesn't let go until the end. So many twists and turns. A great read and present for someone who loves a thriller.