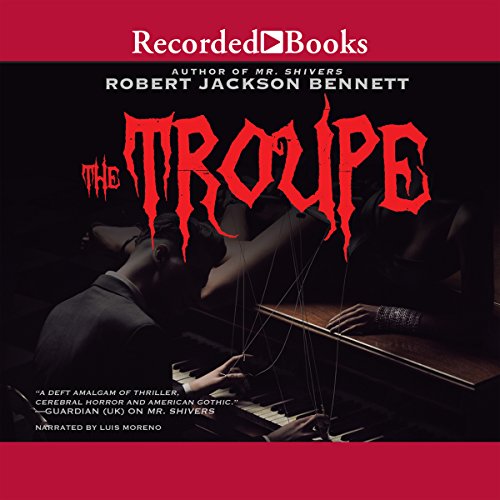 By: Robert Jackson Bennett
Narrated by: Luis Moreno
Try for $0.00

Best-selling author Robert Jackson Bennett has won widespread critical acclaim for his unique brand of darkly inventive fiction. In The Troupe, 16-year-old George Carole joins vaudeville in search of Heironomo Silenus, the man he believes to be his father. But what he discovers casts a dark pall over his world: Silenus' troupe hides a dangerous secret - one that invites death to all in its vicinity.

What listeners say about The Troupe

Disappointment Lies In Expectations Not Realized

Reading the description of this book I could not help but think of The Night Circus, a book I enjoyed very much. The Troupe promises the inner world of Vaudeville, all the odd and the strange, and peppered with mysteries of the other worldly.

What I found surprising is that with (what sounds like) such a good premise for a novel, it is instead only the thin outer crust surrounding the novel, and instead 90% of the prose is mind-numbing dialogue between the characters, who are all one dimensional, grumpy selfish empty shells themselves. If you took a shot for every time a character said "'Why?" after another character spoke you would be under the table by page 20. My biggest gripe is that not much happens in the novel. There is supposedly some big bad supernatural creatures that the troupe is both running from and opposing, but they only show up a few times in the book, and the rest of the time is just the characters in the troupe talking to each other. Dialogue, dialogue, dialogue..... I'm sorry but the "he said" she said" drove me crazy, and then our very ignorant rather daft protagonist responding to almost literally everything with "why?". Imagine watching the show Lost if instead of watching the action all you got to see were Jack and Kate and Charlie and the rest of the cast sitting around on the beach just talking to each other about everything. Oh, and if they were all kind of selfish, short-tempered and stupid.

Sadly after my gripes about the content of the book I must say that none of the characters is very likable either. They are hot tempered and reactive and seem to have no substance. George our main character who is supposed to be a 16 year old pianist in search of his father is incredibly selfish and truly stupid. Yes teenagers can be selfish which is fine, but the author does not seem to have any insight into a 16 year old at all. Rather instead George's inner monologue and responses to those around him seem to be more at the level of a 6-8 year old. He seems to have no comprehension of anything around him and dumbly responds to everything with "why?". All I could picture is a toddler in a grocery store pointing at everything asking "what's that?".... "but why?

I think my greatest disappointment in this book is that the premise could have been interesting if done differently. If instead of basically ignoring what is touted as the plot of this novel, it could have actually flushed out the supposed impending danger and had well rounded characters, this could have been interesting. Instead I got stuck just listening to one-dimensional people talk to each other, yack yack yack yack......

Robert Jackson Bennett's the Troupe is my favorite new audiobook of the year. It called to mind Neil Gaiman’s American Gods, along with Ray Bradbury, and a dash of Stephen King.

Bennett recreates Vaudeville, and imbues it with a sense of magic that feels both historical and fantastical. Here’s some more about the plot: George, a teenage pianist, has been on the Vaudeville circuit for six months searching for his father’s troupe. All he wants is his father’s acceptance, but when he tracks down the players and begins to unravel the secrets Silenus and his companions carry, he’s plunged into a world of danger and magic beyond his wildest dreams. Because Silenus’s shows seem to have an effect on the very world itself, and there are other entities who’d like to bring down the curtain on it once and for all.

All the different members of the troupe are fully fleshed out, and all deliciously complicated. We meet Franny, the strongwoman; Collette, the beautiful singer and dancer; Kingsley, a bizarre puppeteer; and Stanley – Silenus’s mute right hand-man. Finally, there’s Silenus himself – a master showman who claims he’s been alive for centuries. They all have secrets of their own, as well as ambitions, and it’s a delight to spend time with them on the road, and to be surprised by their startling revelations. Knowing what I know now, I can’t wait to go back to it and watch their secrets and twists unfold all over again.

Luis Moreno does a magnificent job of bringing Bennett’s characters to life. I hadn’t heard him read before, and he delivers a subtle reading that manages to give Silenus’s voice a sense of charismatic showmanship, while making George’s a naive, sometimes arrogant teenager, and hits the right notes for all the characters in between. There were a few times in the production where odd pauses fell unexpectedly into the story, which was a little jarring – I’d occasionally look at my iPod to see if it had stopped playing. But all in all, Moreno’s reading is a real treat, and only adds more charm to this already fantastic and riveting story.

The Troupe is a must-listen, a book that will charm, thrill, and give you chills and once it wraps up, you’ll want to do the whole thing all over again.

Originally posted at the AudioBookaneers

Not worth the effort!

I don' understand the positive reviews. I am an avid fantasy/fiction reader and listener (I know have 300+ audible books in my library). Reading the reviews I thought I would get something different, refreshing and "period" (vaudeville).

I simply could never get engaged in the story. I found Mr Moreno boring and flat) and the characters, flat and crude. THere was no warmth, no human interest- simply characters being pushed around in service of a pretty unique fantasy construct. But the construct was not enough to build a novel around. I must admit I made it 50% of the way through the thing and finally said "why I am torturing myself?" this is just plain boring.

I love Black Company, LOTR, first three books in G RR Martin's series (the last two suxed), Sherlock Holmes, Murder Mysteries ("I Would Know You Anywhere" being a favorite, WOT (excepting books 8-9), anything Brandon Sanderson writes (to date). So this is not a case of being stuck on one type of fantasy or genre.

The true horror is the dysfunctional characters

This story has a distinctly "Big Fish" feel to it. Shuffling, kindly, eccentrics with a bygone-era vibe. A cynical curmudgeon hurting people, despite his good heart. Love at first sight with an unobtainable woman. A circus/vaudeville troupe to give everything a flair of magic, art, and color. Like Big Fish, I wanted to like it, but it drove. me. crazy. (So, if you love Big Fish, ignore the rest of my review and buy this book! You are not me and that is fine.)

The characters are TOO annoying. George is a teenager who is blind, self-centered, and vain. Normal teenagers have good days and bad days, so we can love them despite their craziness, but George finds a way to be nails-on-chalkboard awkward all the time, whether he's yelling at someone or romancing them. The other characters notice this, but (strangely) love and pamper him anyway. You will not have this impulse.

It's not just George, either. Have you ever had an argument where the other person makes their point, and you say you're sorry, but then they continue to explain why they're mad over and over until they run out of anger? All the characters are like this, their fury-monologues meticulously transcribed. And they have plenty of opportunities for screaming fits because they spend all their time hanging out with other psychologically miscalibrated individuals.

Really, I can't say that Bennett's character development is bad. I've met people just like his characters. They're just the type of people whose drama and psychosis I try to avoid.

The story is TOO saccarine. Seriously, there is a point at the end, where a character is observed by all his neighbors looking heartbreaking in a manner they can't put their finger on. It's ham-fisted tragedy at its finest. Just when you think the author has painted himself up the most obvious tragic scenario possible, interlaced with 5 other tragic scenarios, he painstakingly explains to you "see, this is what I've done here...." Even when he writes himself a happy ending, he makes sure you know everyone is beautifully screwed. And it's soooo bittersweet you immediately need to go to the dentist.

This is a fairytale without claws. It is not a horror any more than a Disney movie is a horror. It has a "villain" - a very heartwarming villain who is the most likable character. It might be scary to children whose imaginations can provide the kind of terror the author does not. As an adult, your imagination will be too busy figuring out how to kill off all the characters except the two you like. Just like when you're watching "Walking Dead!"

I don't know why people keep getting confused that fairytales can be written by providing a lot of detailed surreal atmosphere and maybe some fairies. A fairytale is dark and unnerving and teaches you about survival. I don't know what this book teaches you. I guess not to date that girl/guy who's been through some stuff and seems a little broken. And that she might be trying to save the world.

One of the best stories of the decade.

I've loved Bennett since picking up American Elsewhere on a whim, and this book just solidified him as one of the best horror authors of my generation. Beautifully written with fantastic characters and a sprawling, mysterious adventure with just a touch of the Lovecraftian. Something Wicked This Way Comes for an older generation.

Just an incredible story. Im not a huge fan of the narrator, but the story was so good it didn't matter!

A great book if you need to break a reading rut...

What did you love best about The Troupe?

The story, the characters, the world were all so interesting and different. I have absolutely zero interest in Vaudeville or theater, but that's really just the framework that this magnificent fabric of story is hung upon - in short, don't let that part turn you off.

I'm a big fan of thicker fantasy & fiction writing, but this book (which is relatively short compared to my usual far) really worked like a charm to break up a "reading rut" that I'd run into where I just wasn't finding anything interesting to dig into.

I didn't love the ending... but I also can't really imagine a better way to close up the book. In short, I guess I was just sad to see the story come to a close when I could have read another 400 pages (or hours?) of material based in this world.