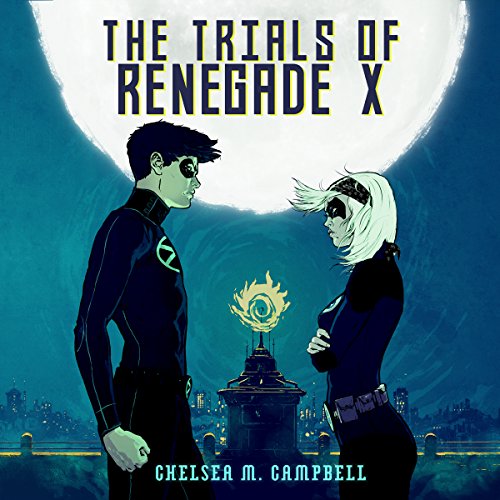 The Trials of Renegade X

Can a half villain ever be a full hero?

Damien Locke didn't choose for his supervillain mom to disown him - just because he sort of defied her and ruined her evil plans to take over Golden City - and he didn't choose for his superpower to be flying, a superhero ability that involves his least favorite thing: heights. But now that he's living with his dad's superhero family and enrolling at Heroesworth Academy, he's ready to embrace his new life, get his H, and finally belong somewhere. But belonging isn't as easy as signing up for classes, and Damien finds himself struggling to fit in more than ever.

Just when he's sure his fate as a hero has been decided, though, he gets a new villain power that he can't control. And things only get worse when he accidentally screws up one of his sidekick Sarah's gadgets, altering her personality and turning her into a crazed, anti-supervillain vigilante - leaving him no choice but to team up with her annoying superhero boyfriend if he hopes to have any chance of getting the old Sarah back, before she captures - or kills - another supervillain like him.

What listeners say about The Trials of Renegade X

I LOVE this series. CMC is a terrific writer. She's funny, and the teenage characters are real (with superpowers) not just stereotypes. Renegade X is a misfit underdog hero who sees things in shades of gray. The narrator nails it! This is a first person narrative, and the exaggerated voice of the teenager imitating his mother is hysterical. I would bet the editors had fits about the unrepentant teenage sex (not that it's graphic). To me, it's just another thing that makes the story feel so real (with superpowers). Great job Chelsea and Phillip. Keep them coming!

Love this series, reader is amazing and the writing is funny & intense when needed.
Looking forward to the 3rd book becoming available. :-)

If I could have I would have read both books in one go I enjoyed them that much. I am super upset that the third book is not available right now. Please fix the problem so I can give you my money and read the third book.

The plot and characters are great,especially renegade x. No matter how long these x books are,it is never long enough.some books are just like that.The dialog is SO snarky.The kind of thing you might think,but never say aloud,but HE does-while acting on it.Damien (x) can manage to have more fun than most people even while dodging rayguns.The narrator is perfect-once you hear him ,you can't imagine anyone else doing it.

even better than the first book

where do we go from such an amazing premiere on the series? UP UP AND AWAY! the writer managed to pull a 'empire strikes back'! and make a sequel better than the original. It's so good to see the supers in their private lives and not just leaping tall buildings in a single bound. thank you again for writing such an amazing book. you are an inspiration for me to get off my bum and pen all the superhero ideas I have in my head. you complete me. I'm excited for part 3. I have no idea where it's going to go. maybe Damien will end up fighting his Dad. or Xavier... I can see some seeds being planted for conflict there :)

A solid sequel but a +18yr read

Narrator: good pacing, I wish the differences between characters of the same gender were more obvious Language: bitch, ass, damn it Violence: some fighting Sexual content: allusions to sexual exploits of under 17 year olds, sexual jokes Parents: if you’re cool with teens having sex with each other and having it almost blatantly encouraged by main characters—this is for you. Story: the story was detailed and well written. Lots of action and drama as should be expected for a teenage superhero-villain. Overall an enjoyable experience with the exception of I don’t personally care for 16 year olds being sexually active. —I was given this free review copy audiobook at my request and have voluntarily left this review.

So glad I discovered the world of renegade x

I really enjoyed this book and I am so glad I discovered this author, I hope the next book in the series will be out soon as I can't wait. I know it is a series written with young teens in mind but as someone in the older demographic I can say that it can be enjoyed at any age. I love the characters, especially Damien, with his struggles to become either all good or all bad. Love that a flying super hero is scared of heights (highly amusing). think most people struggle to find a place to fit in at some point in there lives and the author has captured that prospective really well and super sized it, the problem of doing the right thing for the right reasons. There was plenty of action, mischief and mayhem, just right for a super book.
Damien has decided to embrace his new life as a super hero with open arms, well with his villain mum kicking him out he has no where else to live other than with his super hero dad. The problem is there is too many super hero's going to Heroesworth academy. With out either a 'H' or a 'V' tattooed on his hand he struggles to straddle the line between his new life and his old. The kids at both schools don't trust him and when his own sidekick turns against him because of something he might or might not have done, Damien finds that his life and the lives of the people he cares about most are put on the line. He will have to make new alliances if he has any hope of coming out of this unscathed.
I like the narrator and hope he sticks around for the series, he does such a good jobd with the characters that I can't imagine anyone else doing it.
I was given this free review copy audiobook at my request and have voluntarily left this review.

Everyone needs to listen to this book. Never stopped laughing!!! One of my favourite books of all time and Phillip Russell Newman is an amazing narrator.